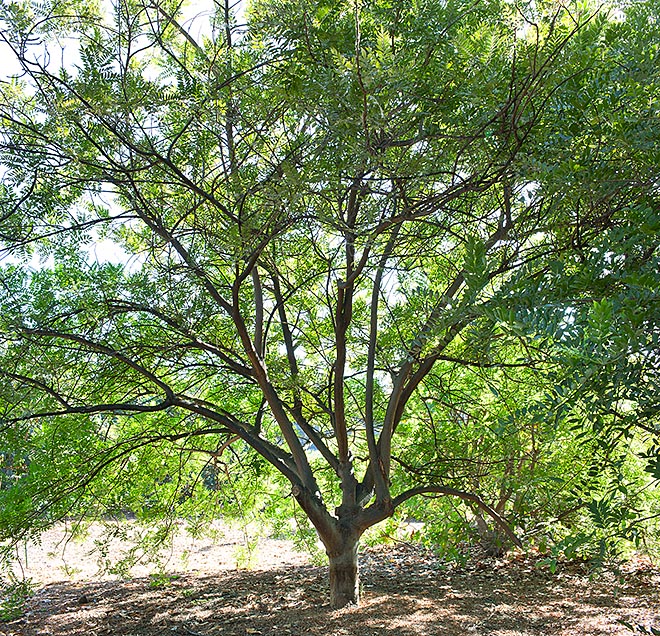 The species is native to Belize, Costa Rica, Ecuador, El Salvador, Guatemala, Honduras, Mexico, Nicaragua and Panama, where it lives in the semi-deciduous forests up to about 1200 m of altitude, in zones characterized by a highly seasonal climate.

The name of the genus is the Greek one for the plum, due to the resemblance of the fruits to those of the Prunus domestica; the name of species is the Latin adjective “purpureus, a, um” = purple, with reference to the colour of the flowers.

The Spondias purpurea L. (1762) is a shrub or a small deciduous tree polygamous-dioecious or dioecious (carrying on the same individual hermaphrodite as well as unisexual flowers or only unisexual flowers on different individuals) rather variable, 8-15 m tall, but which in cultivation is kept lower, with straight and rather short trunk, much ramified, and greyish bark, smooth in the young plants then verrucose and longitudinally fissured, and particularly frail branches. The leaves are alternate, odd-pinnate, 8-26 cm long, composed by 5-25 elliptic to oblanceolate leaflets with entire margins or slightly serrate, 2-5 cm long and 1,5-2,5 cm broad, bright green on the upper page, pale below. The inflorescences, on the one year old branches having no leaves, are pubescent axillary panicles, 3-8 cm long, carrying flowers with 4-5 red or purple petals, 2-4 mm long, and 8-10 stamina. The fruits are drupes of various shape, ovoid, oblong or pyriform, usually of red or purple colour, at times from yellow to orange, 2-5,5 cm long , smooth and glossy, with juicy yellowish pulp, fibrous, of pleasant more or less acidulous taste; the endocarp is woody, oblong, 1,5-3 cm long, containing up to 5 seeds, rarely produced, as it usually develops by parthenocarpy. It almost exclusively reproduces by cutting, which easily roots, utilizing 1-2 years old branches of 0,6-2 m of length and 4-6 cm or more of diameter, cut before the emission of the leaves, kept in the darkness for about one week and interred for about 30 cm, with the first fructification after 2-3 years.

It is the most appreciated and popular species of the genus Spondias, cultivated since remote times, now diffused from Mexico to Brazil, in the Caribbean and in other tropical countries, such as the Philippines and Nigeria, and its fruits are easily found in the markets. It is cultivable in the tropical and marginally subtropical climate zones, characterized by a marked dry season, otherwise it fructifies little or nothing at all, temperatures around the 0 °C, even for very short period, damage it seriously; it is not particular about the soil, even if poor, provided the same is well drained.

The pulp of the fruit is consumed fresh or boiled and dried up in the sun or under form of juice, jellies, jams or utilized for preparing alcoholic beverages, the young leaves are consumed raw or cooked as vegetable. The most important adversity is represented by the fruit flies (mainly Ceratitis capitata Wiedemann, 1824 and Anastrepha ludens Loew, 1873) which may cause serious damages and limit its production.

The resin secreted by the trunk is locally utilized as glue; the leaves and the bark are used, under form of decoction, in the popular medicine for various pathologies.