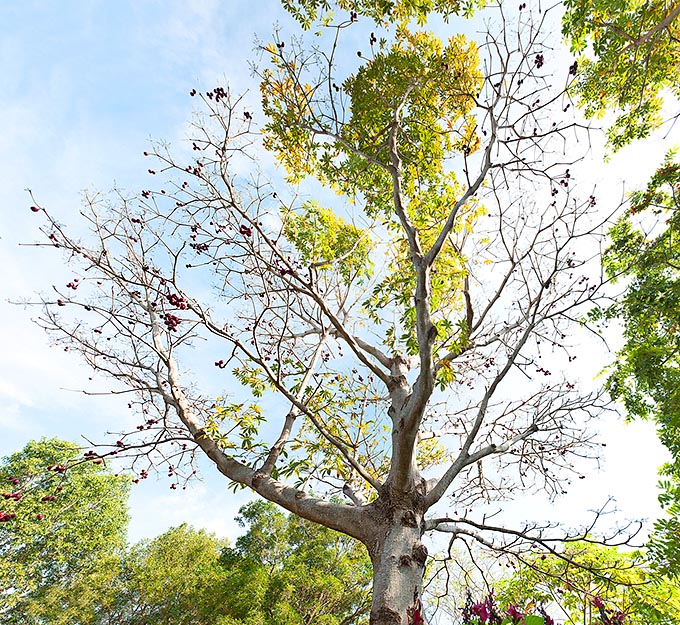 A Sterculia foetida in late winter. It may reach the 40 m with an imposing crown © Giuseppe Mazza

The species is native to Australia (Queensland), Bangladesh, Cambodia, India, Indonesia, Malaysia, Myanmar, Philippines, Sri Lanka, Thailand and Vietnam, where it grows in the deciduous forests mainly along the coasts and the water streams.

The Sterculia foetida L. (1753) is a great deciduous tree, up to 40 m tall, with erect trunk with greyish bark and almost horizontal branches arranged in verticils (3 or more inserted on the same node). The leaves, grouped at the apex of the branches on a 10-30 cm long petiole, are palmate-compound with 5-9 leaflets from elliptic to lanceolate, 6-15 cm long and 2-5 cm broad, with entire margin and long pointed apex, initially pubescent, then glabrous, of glossy green colour and of unpleasant odour. 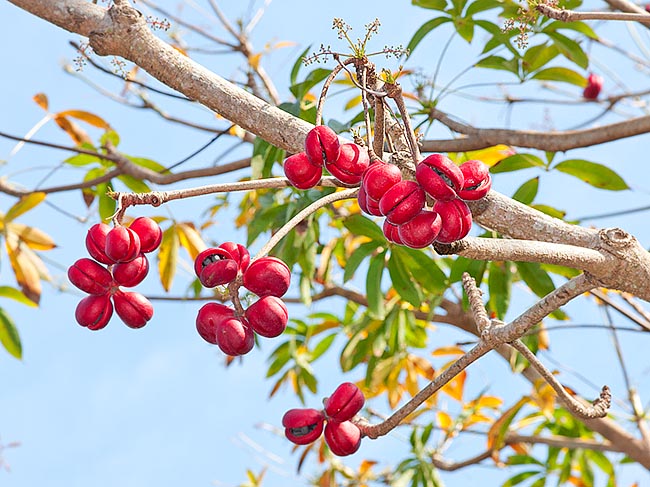 Sub-terminal panicle inflorescences, erected, produced before the emission of the leaves, carrying stinking unisexual flowers on the same plant, of about 2 cm of diameter on a 1,5-2,5 cm long peduncle, without corolla, having campanulate calyx with 5 lanceolate lobes with retroflexed apex, of yellowish colour at the opening, then red or purple, pubescent; male flowers with bent staminal column about 1 cm long with 10-15 anthers grouped on top, female flowers with gynophore (column supporting the ovary), about 0,6 cm long, pubescent ovary with five lobes and bent style.

The fruit is composed by 1 to 5 ellipsoid follicles, about 10 cm long and 4 cm broad, woody, initially green, then red, opening when ripe, containing 10-15 oblong, slate-grey seeds, 1,5-2,5 cm long, placed along the borders of the opening.

It reproduces by seed, previously kept in water for 24 hours, in organic soil with addition of coarse sand or perlite, kept humid, at the temperature of 22-24 °C.

The seed germinates after 1-3 weeks forming a long taproot; the initial growth is particularly fast. Imposing and ornamental tree thanks to its foliage, the inflorescences and the showy infructescences, but with the drawback of the unpleasant and piercing odour issued by the flowers, cultivable in full sun in the tropical and subtropical climate zones, as it is rather sensitive to the low temperatures. 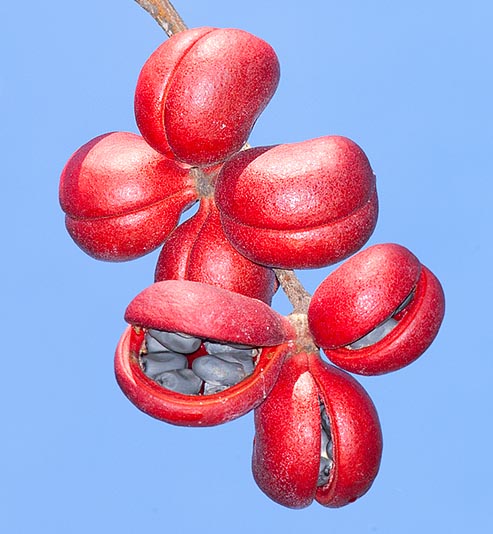 It is not particularly demanding about the soil, provided this is draining, and kept humid, even if well rooted specimens can stand drought periods.

Despite the drawback mentioned above, it is utilized at times as shade tree in great parks and gardens and in the road trees, but at a certain distance from the homes.

It is also used for monitoring the erosion.

The wood, of pink colour, easy to work and to finish, is employed in the construction of furniture and locally for making boats and musical instruments.

The leaves are often utilized as fodder for animals. The resin exuding from the trunk and the branches is used as glue.

Finally, cordages are gotten form the bark.
The unripe seeds are not edible, they can be consumed ripe and roasted, with a taste similar to that of the chestnuts (Castanea sativa Mill.), but with moderation as it has a laxative action.

Leaves and flowers are utilized in the traditional medicine, as well as the oil obtained from the seeds, whose main component (53%) is the sterculic acid, which has proven to have interesting and promising pharmacological applications.

The oil has also an insecticidal activity and a potentiality as biodiesel.