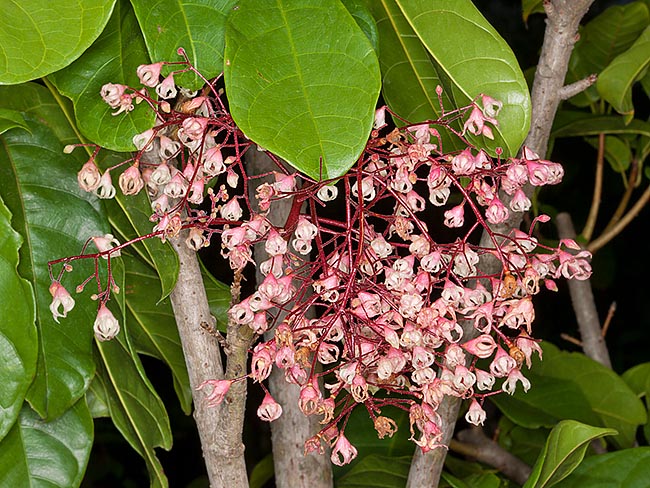 The species is native to China (Fujian, Guangdong, Guangxi and Yunnan) and Taiwan, where it lives in the dense humid forests at low and medium altitude.

The name of the genus comes from the Latin “stercus” = dung, manure, with reference to the unpleasant smell of the flowers and of the leaves of some species; the name of the species is the combination of the Greek adjective “μόνος” (monos) = sole, unique and of the substantive “σπέρμα” (sperma) = semen, with obvious reference.

The Sterculia monosperma Vent. (1805) is a tree with erect, cylindrical trunk, 10-20 m tall, with smooth or slightly grooved longitudinally by brown-greyish colour bark. The leaves, often grouped at the extremity of the branches on a 2-8 cm long petiole, are simple, alternate, elliptic to oblong with pointed apex and entire margin, 8-25 cm long and 4-15 cm broad, coriaceous of intense green colour. Terminal or loose axillar panicle inflorescences, up to about 30 cm long, carrying numerous unisexual flowers on the same plant, without corolla, with rachis and pubescent pedicels of red colour, campanulate calyx, initially white cream then yellow reddish, pubescent, with linear-lanceolate lobes having pointed apex curved inwards, emitting a slight scent of vanilla; the male flowers, with curved staminal column and yellow anthers, are more numerous and slightly smaller than the female ones which have a five cells globose ovary.

The fruit is composed by 1-5 ovate-oblong follicles with pointed apex, initially green, then red when ripe, coriaceous, velvety, 3-8 cm long and of 2-3 cm of diameter, usually containing one ellipsoid seed, less frequently 2-4, of about 1,5-2,5 cm of length, of glossy brown-blackish colour.

The slightly vanilla scented unisexual flowers have no corolla. The fruit is composed by 1-5 ovate-oblong follicles with pointed apex, initially green then red when ripe, coriaceous, velvety, 3-8 cm long and of 2-3 cm of diameter. Usually they contain one ellipsoid, 1,5-2,5 cm, edible seed only © Giuseppe Mazza

It usually reproduces by seed, previously scarified and immersed in water for 24 hours, in organic loam with addition of coarse sand or perlite, maintained humid at the temperature of 22-24 °C, with germination times starting 2 weeks.

Native to China is nowadays vastly diffused in south-eastern Asia as ornamental and shade tree, due to the thick luxuriant foliage, as well as for its fruits, mainly rich of carbohydrates, besides fats, proteins and minerals, which are consumed peeled, raw, roasted or boiled or utilized for preparing traditional dishes.

Cultivable in the tropical, subtropical and marginally warm temperate climate zones, where temperatures under the 0 °C are exceptional events and of short duration. It requires an exposition in full sun and is not particular about the soil, provided well drained, maintained almost constantly humid, but without stagnations, even if well rooted specimens can bear periods of dry.