The species is native to Assam, Cambodia, Eastern Himalaya, India, Lesser Sunda Islands, Malaysia, Myanmar, Singapore, Sulawesi, Thailand and Vietnam where it lives in the forests and thickets from the sea level up to about 1000 m of altitude.

The name of the genus comes from that in Telugu (India) “soora gade” of this species; the specific name is the combination of the Latin adjective “multus, a, um” = much, numerous and of the substantive “flos, -oris” = flower, with obvious reference.

The Suregada multiflora (A.Juss.) Baill. (1858) is a shrub or a small evergreen dioecious tree with vertical posture, up to about 12 m tall, with branches with smooth bark of greyish yellow to greyish brown colour. The leaves, on a 0,2-1 cm long petiole, are alternate, simple, oblong-elliptic to obovate-elliptic with entire margin or slightly serrate in the terminal part, obtuse or shortly pointed apex, 5-15 cm long and 3-8 cm broad, coriaceous, of glossy intense green colour above, pale green below. The inflorescences, on a 0,3-1 cm long are cymes opposite to the leave bearing few unisexual flowers having no corolla, of 0,4-0,7 cm of diameter, white cream to yellow and slightly perfumed. Male flowers with calyx with 5 roundish sepals, concave, and a multitude of stamens, the female ones with 5-6 obovate sepals persistent in fruit, ovoid trilocular superior ovary and 3 short styles with bifid stigma. 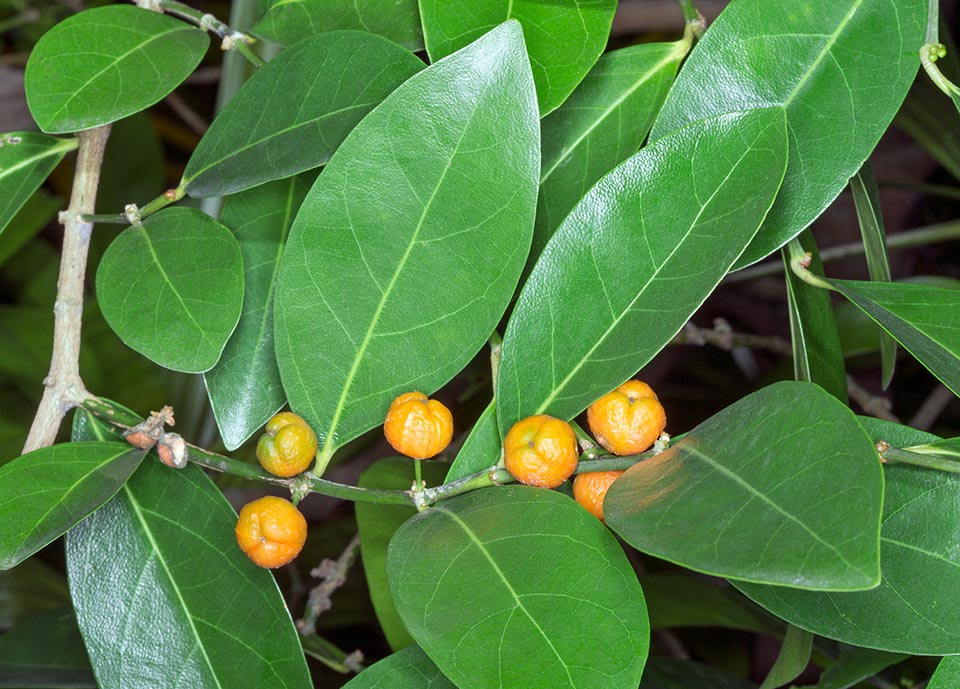 Small dioecious tree of South-East Asia, the Suregada multiflora can be 12 m tall. The fruit, similar to a small citrus, is a 1-1,8 cm trivalvular capsule with 3 seeds. Bark, leaves and roots, used in the traditional medicine of the origin countries for various pathologies, are presently studied by the official pharmacopoeia © Giuseppe Mazza

The fruit is a globose trivalvular capsule, of 1-1,8 cof diameter, of initially green colour, then orange yellow when ripe, with 3 globose blackish brown seeds covered by white aril.

It reproduces by seed in draining loam maintained moderately humid at the temperature of 24-26 °C.

Little known species, in spite its ornamental characteristics, outside the origin areas where is cultivated in parks, gardens, even if small, and as road tree. It grows in the tropical and humid subtropical climates in full sun or slight shade and is not particular about the soil, provided draining and maintained moderately humid. The wood is occasionally utilized for poles and as fuel. Bark, leaves and roots are variously utilized in the traditional medicine of the origin countries for various pathologies; laboratory studies have evidenced the presence, in various parts of the plant, of bioactive compounds, in particular diterpenoids, of interest for the official pharmacopoeia.