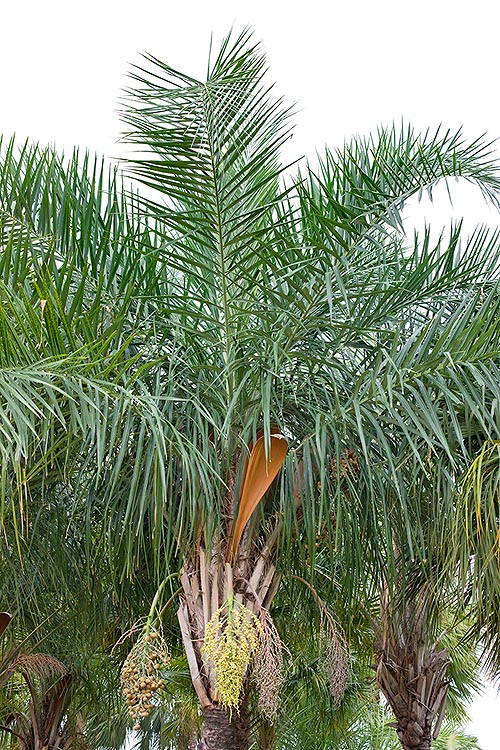 Up to 12 m tall, the Syagrus orinocensis is an ornamental plant for the Tropics © Mazza

The plant is native to northern Brazil, Colombia and Venezuela, where it grows in the deciduous forests mostly on outcrops of granitic rocks at low altitudes.

The exact derivation of the name of the genus is unknown, the most credited hypothesis is that it comes from the name “syagrus” given by Pliny the Elder (23/24-79) to a variety of date palm; the Latin name of the species indicates its origin, the Orinoco River basin.

The Syagrus orinocensis (Spruce) Burret (1937) is a monoecious plant with single stem, rarely caespitose, up to 12 m tall, even if it keeps lower when cultivated, with a diameter of 10-15 cm, of pale grey colour on which are, more or less visible, the rings trace of the fallen leaves.

The leaves are pinnate, elegantly arcuate, up to 3 m long, with intense green pinnulae, 30-70 cm long, irregularly disposed in groups of 2-3 along the rachis and inserted at different angles, but usually upwards, giving the leaf a slightly feathery look with a V outline. The foliar base, about 40 cm long, wraps the stem only partially.

The inflorescences come out from between the leaves, initially protected by an up to 1 m long woody spathe, and are ramified with the whitish flowers placed in the characteristic triad (a female flower between two male ones), but at the extremity where only male flowers are present. The fruits are ellipsoid of 2,5-4,5 cm of length and 2-3 cm of diameter, yellow to brown.

Despite the undoubted ornamental characteristics, this palm with tall and thin stems crowned by an elegant foliage is scarcely cultivated outside its zones of origin, but gardens, botanical parks and lovers’ collections. In order to grow up in the best way, it requires a position in full sun and a tropical or subtropical climate where it may stand exceptional decreases of temperature even to -1 °C, but with slight harm to the foliage. It may bear dry periods, but it gets advantage from regular watering and periodical manuring. In the origin countries, its fruits are utilized as food for the livestock and the leaves are used for making handicrafts objects. The local populations of the Amazonas eat the larvae of an insect, the Rhynchophorus palmarum L. (1758), present in the decaying trunks, larvae which play an important role in their diet.