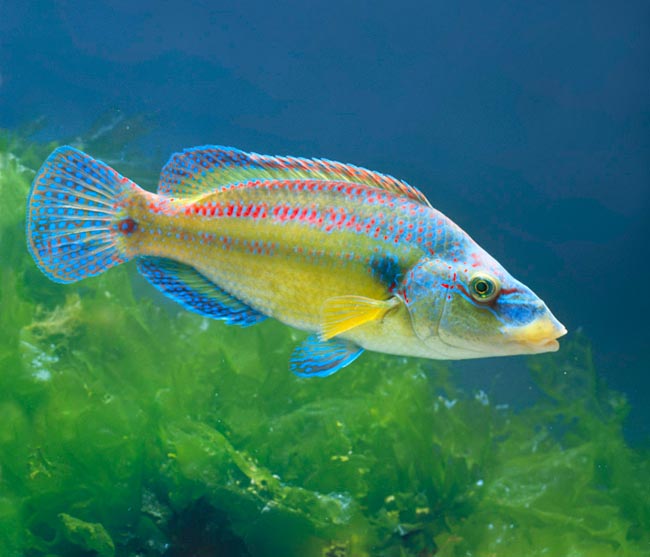 The Peacock wrasse (Symphodus tinca Linnaeus, 1758) belongs to the class of Actinopterygii, the ray-finned fishes, to the order of Perciformes and to the family of Labridae.

The name of the genus comes from the Greek “syn” = together and “odus” = teeth, therefore, teeth grown together, because they are almost not visible, as they are hidden by the gingival tissue and the lips.

The name of the speciies comes from the Latin “tinca”, a freshwater fish having the same name in Italian, and which, like this last, a little prized flesh.

The whole Mediterranean, Black Sea includes, and, after Gibraltar Strait, the Atlantic coasts, to south up to Mauritania and the Canary Islands, and to north up to Spain and Portugal.

Shallow coastal waters. Usually, it never goes down under the 50 m of depth.

It is common among the submerged rocks and the Posidonia (Posidonia oceanica) prairies, where it finds nutriment and shelter. It also frequents the brackish waters.

The eyes are small and the head, proportionally, is very big. The body is flat, about one third of the length of the fish high, excluding the tail. The males reach the 30-40 cm, the females do not exceed the 25 cm, and, seen that it is matter of a protogynous hermaphroditic species, all the specimens exceeding this size are almost surely males. 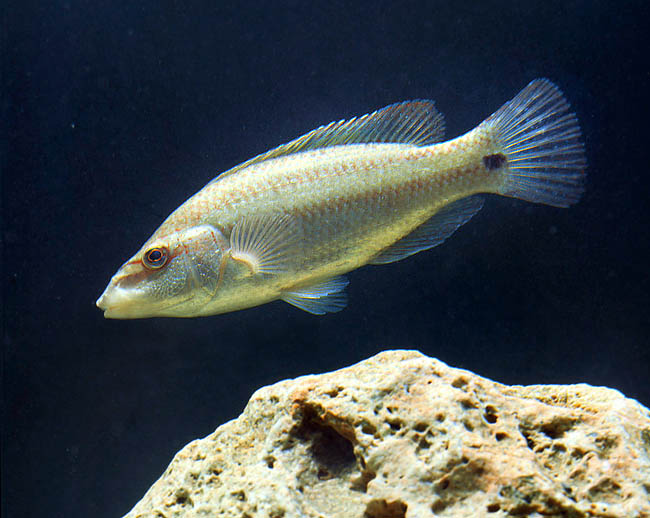 After the reproductive time, males livery similar to the females' one © Giuseppe Mazza

Frequently the adults show a more or less intense black blotch over the pectoral fins.

Both sexes have a dark brown frontal mask, a black dot at the centre of the caudal peduncle and two dark brown longitudinal bands, more evident in the females during the reproductive period.

On this occasion, the nuptial livery of the males is really spectacular, with yellow and green shade on the sides and red linear speckles not to mention the spots and the blue drawings.

The peacock wrasse nourishes of ophiurans, molluscs, crustaceans and annelids.

At the moment of spawning, between April and June, the females, usually in group, stick, early in the morning, the eggs to the leaves of posidonia or other submerged bodies. The males fecundate them and then look after them until the hatching, but do not ventilate them with their fins. Which is, actually, a sort of parental care.

The Symphodus tinca even have the interesting habit of, from time to time, remaining still, as if they were impaled, with the head looking upwards, in order to have their parasites carefully removed from its skin by the Symphodus melanocercus, a singular, moderately rare, relative, present in the Mediterranean and Sea of Marmara.