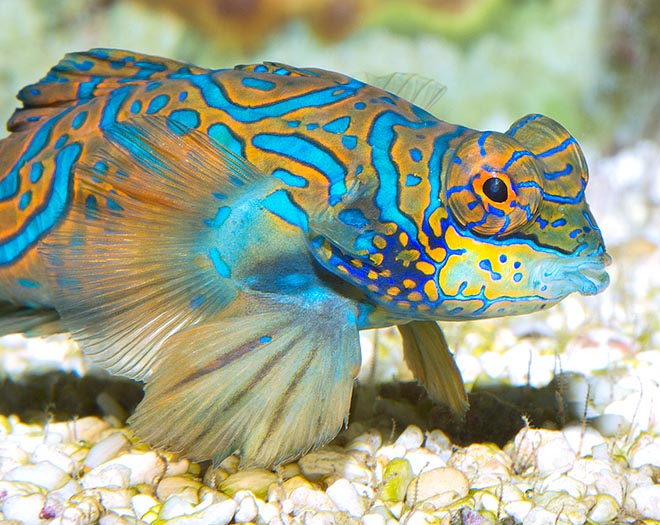 The multi-coloured Mandarinfish (Synchiropus splendidus Herre, 1927) belongs to the class of Actinopterygii, the ray-finned fishes, to the order of Perciformes and to Callionymidae, a family of benthic fishes evolutionarily close to Gobiidae, counting around twenty genera and almost 200 species commonly called dragonets due to their odd appearance, without scales. Under the skin, on the preoperculum, there is then a well developped spine that causes painful wounds, long to heal, hence the recurring name in various languages of spider fish.

The mandarinfish is at home in the tropcal waters of the Western Pacific. Indicatively, we find it twoards north-east in Malaysia, Indonesia, Philippines, Taiwan and Ryukyu Islands up to southern Japan and towards south-east in the Palau Islands, in Micronesia, Papua New Guinea, Solomon Islands, Australia and New Caledonia.

It lives in shallow waters in the lagoons madreporic formations. It has been sighted even at 12 m of depth, but usually it follows, walking on the fins or with short spurts, the outline of the bottom in the first 6 m of water, often in places protected by the very long spines of the Black long spine urchin (Diadema setosum). 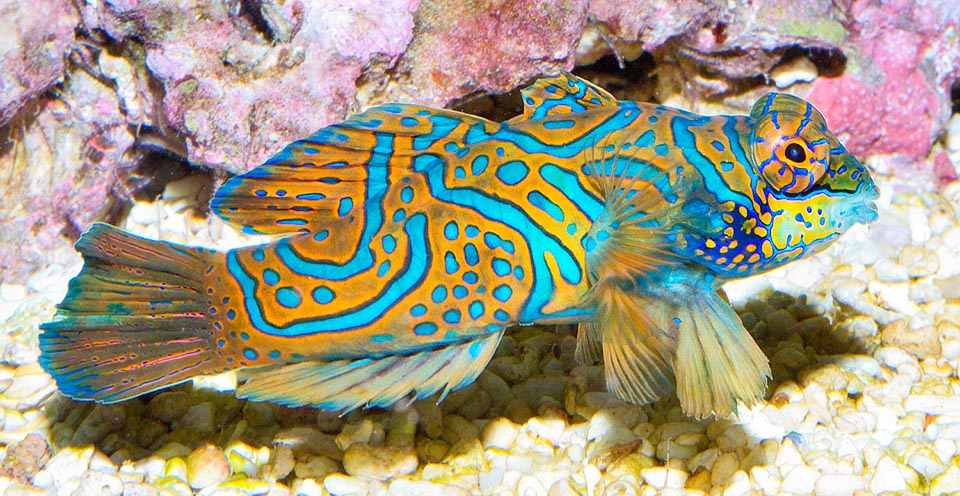 Only 6-7 cm long, has no scales but a protective mucus. It moves walking on the fins or with short spurts, nourishing of small planktonic crustaceans © Giuseppe Mazza

As typical to the family, under the skin of the preoperculum hides a dangerous spine and the gill openings are reduced to small orifices. Being the scales absent, the body is protected by a mucus, abundantly secreted when the fish is menaced or under stress, that defends it from the parasites and has a quite repulsive smell for the predators. The livery is one of the most beautiful in the fishes world, so much to lead to think to a luxurious Chinese Mandarin dress. On the reddish brown, up to red brick, colour of the background, stand dottings and elegant camouflage patterns edged in black of light blue colour or turquoise interesting also the fins. 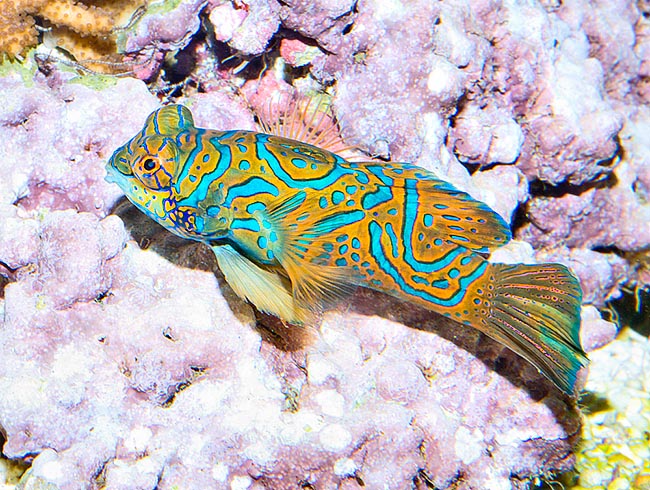 The showy livery is worthy of a Chinese Mandarin. In spite of the size it’s good only for large aquaria that, thanks to corals, have enriched in the time of the planktonic microrganisms it eats. It is not an endangered species © G. Mazza

The nature of this blue is not due to the light incidence, as often happens, but to a real and proper colouring agent.

The iris is orange red, surrounded by a rayed design that takes up the colours of the body. The chinstrap is clear and before the pectorals there is a dark zone adorned of orange spots.

In the market are often available varieties of colour and the females are usually less bright than the males.

The mandarinfish lives isolated nouri- shing of the microcrustaceans it finds among the corals. The males are quite territorial but allow the females to enter their small kingdom and attack only the competitors.

For the wedding the spouses embraced rise to the surface and entrust the fecundated eggs to the currents.

It is not, as people think, an easy aquarium fish. It adapts only, in spite of the small size, to big pools where with the time have settled planktonic crustaceans. Otherwise, it is necessary to administer larvae of Artemia salina, or other microscopic species such as Cyclops and Mysis but it is not sure that it likes them. Furthermore, it is not possible to keep in the same pool two males that would bloodily fight because of their innate territoriality. The resilience of the species is excellent: in fact only 15 months are sufficient for totally reintegrating the members of a certain zone in case of catastrophe. The pressure done by the aquariology market is minimal and the oceans will always have enough plankton to nourish them. No wonder therefore that the vulnerability index of the Synchiropus splendidus is very low: only 11 on a scale of 100.