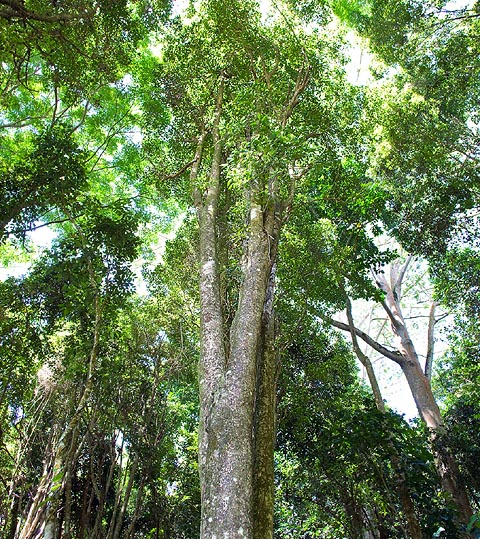 This species is native to the pluvial forests of the Maluku Islands (Indonesia).

The name of the genus is the combination of the Greek terms “sys” = together, and “zygon” = yoke, with reference to the petals, which in some species are merged.

The name of the spcies is the Latin term “aromaticum” = aromatic, with obvious reference.

The Syzygium aromaticum Merr. & L.M.Perry (1939) is an erect evergreen tree, with numerous ascending branches, of initially conical shape, up to about 20 m tall, even if it keeps lower when cultivated, with grey and smooth bark.

The leaves are opposite, from oblong to elliptic with sharp apex, 6-16 cm long and 3-6 cm broad, coriaceous, of pink colour in the young leaves, then glossy dark green, aromatic due to the presence of several oleiferous glands in the lower page.

The inflorescences are terminal panicles, about 5 cm long, carrying up to 20 hermaphrodite flowers, with an intense perfume, usually in groups of 3-4, with 4 triangular sepals, initially of yellowish green colour, then, gradually, red when the flowers opens; 4 roundish petals of reddish colour, of about 6 mm of length, which fall down after the opening, and numerous 7 mm long, white, stamina. The fruit is an ovoid berry of dark red or purple colour, 2,5 cm long, containing only one oblong, about 1,5 cm long, seed. 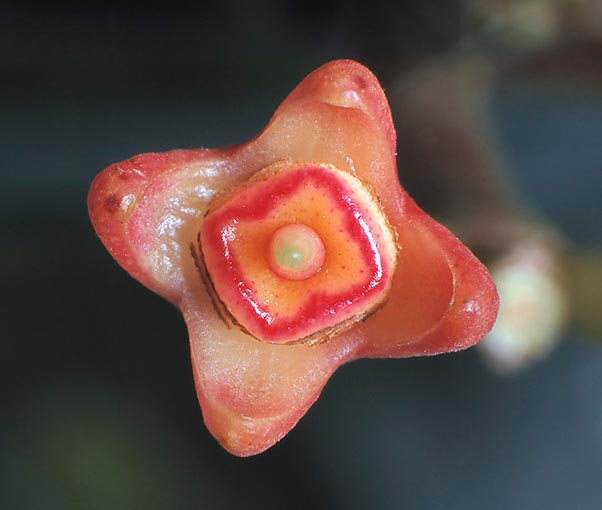 Flower close-up. The fruits are harvested in bud for producing the spice © Giuseppe Mazza

It reproduces by seed which, due to the very short-lasting germination capacity, must be planted as soon as possible, after a pre-treatment in water for three days, in sandy soil rich of organic substance.

The germination takes place in 2-6 weeks and the first blooming happens between the fifth and the ninth year of age.

It is a species suitable for purely humid tropical climate, with abundant rainfall distributed almost uniformly all over the year, and high temperatures as it gets already serious damages if the same drop below the 10 °C.

It is to be cultivated in full sun, but when young, when it needs shade, and sheltered from the wind, on soils rich of organic substance, also clayey, provided well draining.

The tree supplies on of the most ancient and prized spices, the cloves, which have a penetrating odour and aromatic and pungent taste, utilized for aromatizing dishes of meat and rice, but also sweets and drinks, and amply employed in the traditional medicine.

In the eastern countries, particularly in China and Japan, they are also utilized as incense, and, in Indonesia, most of the local production is added, pulverized, to the tobacco in the cigarettes called “kretek”. 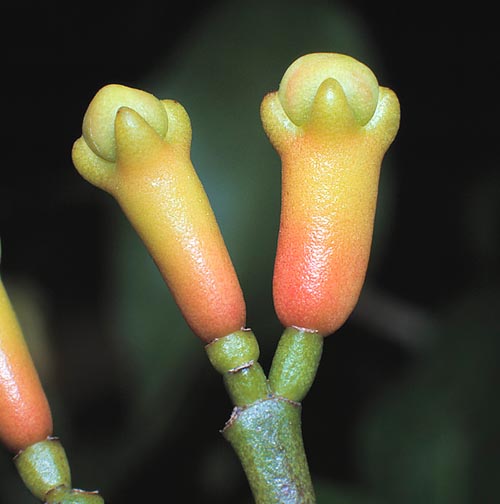 Hand-picked, they darken while drying and get the look of a nail © Giuseppe Mazza

The “cloves”, which with the common carnation, the Dianthus caryophyllus L., have nothing to share, are nothing else than the buds of the flowers hand harvested before their opening and dried up for about one week, formed therefore by the stem, the 4 sepals and the 4 petals still closed, which remind the shape of a 12-18 mm, reddish brown, nail. The cloves contain the 15-20% of an essential oil, which is extracted in vapour stream, of a colour going from the yellow to the pale brown, formed for the 70-90% by eugenol, used in the alimentary industry for aromatizing a huge variety of products, and in the pharmaceutical and cosmetics ones, in toothpastes, soaps, detergents, lotions, etc.

The oil has anti-oxidant, antibacterial and fungicide properties and till the recent past it was utilized in the mouth and throat inflammations and as local anaesthetic in dentistry; the pure oil is, however, to be utilized with great caution, under supervision of medical staff, being greatly irritant.

The Syzygium aromaticum is cultivated in Indonesia, which is the greatest producer, Madagascar, Réunion, Sri Lanka and Tanzania (in particular, Zanzibar and Pemba).