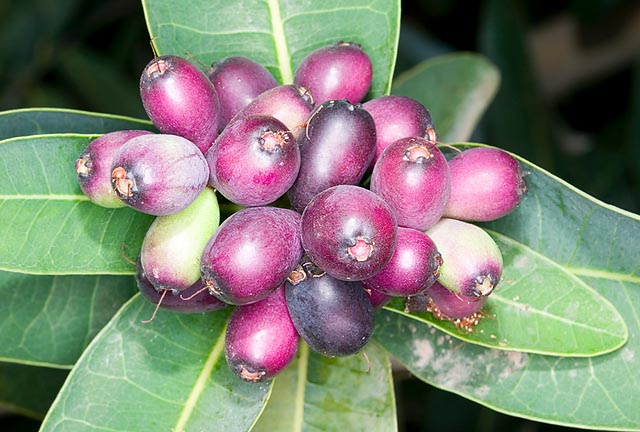 This species is native to Africa (Angola, Botswana, Burundi, Democratic Republic of the Congo, Kenya, Malawi, Mozambique, Ruanda, South Africa, Swaziland, Tanzania, Uganda, Zambia and Zimbabwe), where it grows at the margins of the humid forests, in the humid prairies and in the coastal sandy zones, mainly close to lakes and water streams.

The name of the genus is the combination of the Greek terms “sys” = together and “zygon” = yoke, with reference to the merged petals of some species; the Latin name of the species, “cordatum” = heart-shaped, refers to the shape of the base of the leaf.

The Syzygium cordatum Hochst. ex Krauss (1844) is a shrub or evergreen tree, up to about 15 m tall, wit a dark brown bark, wrinkled and fissured in the old specimens, thick and roundish crown; the young branches have a quadrangular section. The leaves, concentrated in the terminal part of the branches, are opposite, almost sessile (without petiole), sub-roundish or elliptic-cordate, 3-12 cm long and 2-7 cm broad, coriaceous, of a glossy bluish green colour on the upper page, pale green below; the young buds have a bright red colour.

The inflorescences are in terminal cymes carrying numerous hermaphrodite flowers, on short peduncle, perfumed, white, yellowish or pinkish, with merged petals forming a sort of a hood, which falls down at the opening time, and 1-1,5 long stamina, which are the most conspicuous part of the flower. The fruit is a 1,8 x 1 cm, oblong or urn-shaped berry, of blackish purple colour usually containing only one whitish seed. It usually reproduces by seed which has a very short of germination time, it is to be, therefore, placed into the ground, in sandy soil kept humid, as soon as possible; the germination takes place in about one month at the temperature of 20-22 °C.

It is a fast-growing species cultivable in the tropical, subtropical climate zones as well as in the warm temperate, where it can resist for a short time to temperatures of a few degrees below the 0 °C. It requires an exposition in full sun and draining soils with a great availability of water, especially in the warmest months. Of sure ornamental value due to its glossy foliage and the abundant flowering, it is at times utilized as shade tree or for border barriers; it has also a remarkable resistance to fire.

The fruits are edible, rather acidulous, and are eaten fresh or utilized for preparing alcoholic drinks and jams. The flowers, rich of nectar, are pollinated by insects, particularly bees, and therefore play an important role in the apiculture. The finely grained wood, moderately hard and resistant, long-lasting in water and of good workability, is used for fabricating everyday objects, tools, furniture, boats and in the buildings; it is also excellent as firewood and for producing charcoal.

All parts of the plant are variously utilized in the traditional medicine.