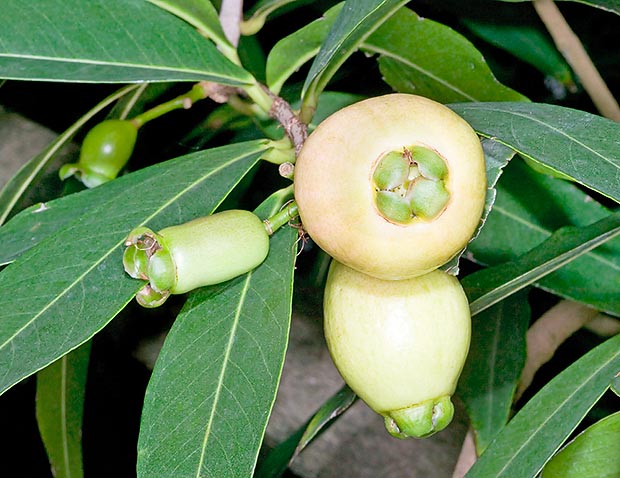 This species, widely cultivated and naturalized in many tropical countries, is deemed to be native to south-eastern Asia (Borneo, Eastern Himalaya, Malaysia, Myanmar, Nepal, Southern China, Thailand and Viet Nam).

The name of the genus is the combination of the Greek words “sys” = together and “zygon” = yoke, with reference to the merged petals in some species; the name of the species comes from the Malaysian one.

The Syzygium jambos (L.) Alston (1931) is an evergreen, up to about 12 m tall tree, with the bark of a pale brown colour and ample and thick crown.

The leaves, on a short petiole (5-10 mm), are simple, opposite, lanceolate, linear or oblong, with sharp apex, 10-24 cm long and 2-6 cm broad, rather coriaceous, of an intense glossy green colour, but the young ones, which are pinkish. The inflorescences are in terminal cymes carrying 2 to 8 hermaphrodites, perfumed flowers, with 4 ovate and concave petals, about 1,5 cm long and a crowd of 1,5-4 cm long, cream white, stamina; solitary flowers may rarely appear at the axil of the leaves.

The flowers are pollinated by nectarivorous birds and by insects, in particular, bees, which produce a honey with a special taste. The fruits are generally globular berries, at times slightly piriform, of 2,5-5 cm of diameter, when ripe of white or pale yellow colour, at times with pink shades, with a 1-1,5 cm thick pulp, yellowish, sweet, with a slight perfume of rose.

The fruit has a central cavity containing one seed, of 1-1,5 cm of diameter, polyembryonic (up to four embryos). It reproduces by seed, which, due to the shortness of its germination capability must be placed in the ground as soon as possible, on a sandy soil, kept humid, in shaded position; the germination takes place in 1 to 4 months, the fructification by the fourth year of age; it can reproduce also by semi-woody cutting, with low success rates and by air layering. 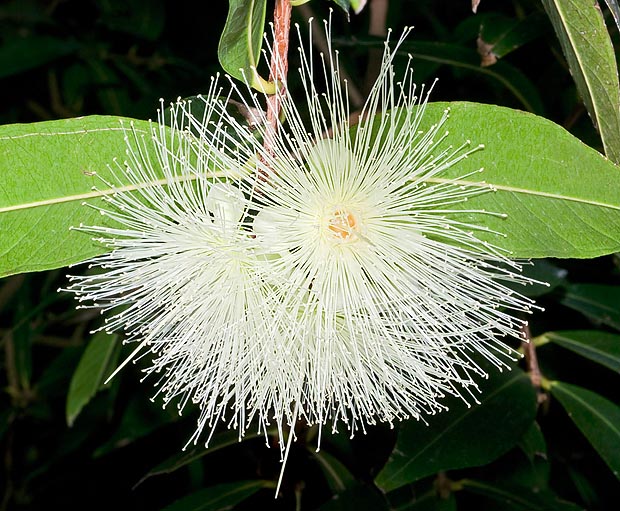 It easily self disseminates, so much to become a pest in some zones, in particular in the humid ones, and along the water streams, thus ousting the local vegetation.

It is a tropical and humid subtropical climate species, even if, when adult, it resists to short dry periods; its cultivation may be tried also in warm temperate zones, as it can resist to about -4 °C for a very short time, but where the temperature can rarely go below the 0 °C, even if slightly, usually it does not fructify.

The optimal exposure is in full sun, except during the juvenile phase when a slight shade is to be preferred, and is not particular about the soil, provided the same is well draining.

Apart its fruits, it is amply cultivated as ornamental thanks to its thick crown and the showy flowers, which are produced several times during the year in the tropical zones, which stand out from the glossy dark green foliage.

Excellent shade and windbreak tree, it is often utilized in the coffee and cocoa plantations.

The fresh fruits, which are rapidly perishable and therefore are only locally consumed, are mainly used for preparing preserves; in some countries they are also candied or canned. A watery solution, not distinguishable from that obtained from the rose petals, is obtained from the distillation of the fruits.

Furthermore, the tree furnishes a good, hard and firm wood, suitable for furniture and musical instruments, locally used also as fuel and for producing charcoal. Finally, the bark and the fruits are variously utilized in the traditional medicine, especially in Asia and Africa.