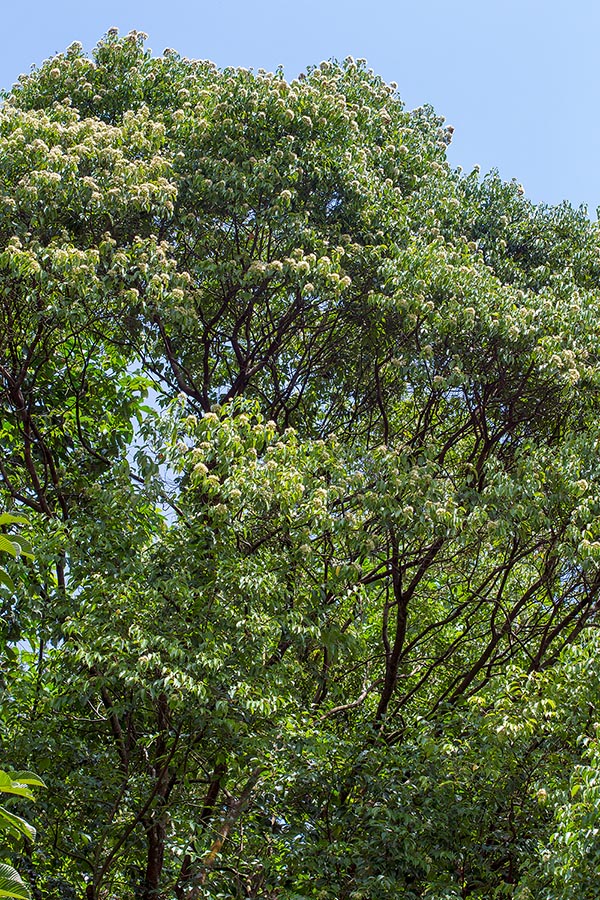 In the often swampy forests of South-East Asia, the Syzygium lineatum reaches the height of 30 m © Giuseppe Mazza

The species is native to Borneo, Cambodia, China (Guangxi), Java, Laos, Lesser Sunda Islands, Malaysia, Myanmar, Philippines, Singapore, Sumatra, Thailand and Vietnam where it grows in the humid forests, often in swampy areas and close to water streams, from the sea level up to about 1000 m of altitude.

The Syzygium lineatum (DC.) Merr. & L.M.Perry (1938) is a shrub or evergreen tree up to 30 m tall in the old specimens in nature, but that usually maintains much lower, with dense foliage and erect trunk, of up to 50 cm of diameter, with greyish bark tending to flake off with the age, rich of tannins; in swampy or frequently flooded zones at times produces at the base stilt roots for supporting the stem. The leaves, on an about 1 cm long petiole, are opposite, simple, 6-12 cm long and 2,5-4,5 cm broad, with acuminate to caudate apex, rather coriaceous, with numerous secondary veins, parallel and spaced of 1-2 mm, more visible on the lower page.

It reproduces by seed, that must be interred as soon as possible having a short lasting germinability, and by cutting and air layering.

Species diffused in nature and frequently cultivated in the origin areas, in parks and gardens and as road tree, due to its dense crown and the abundant perfumed blooming from December to June, and to a lesser extent, for the fruits. It requires full sun and adapts to different types of soil, even poor, sandy to heavy, and stands well the water stagnations and the marine aerosols. 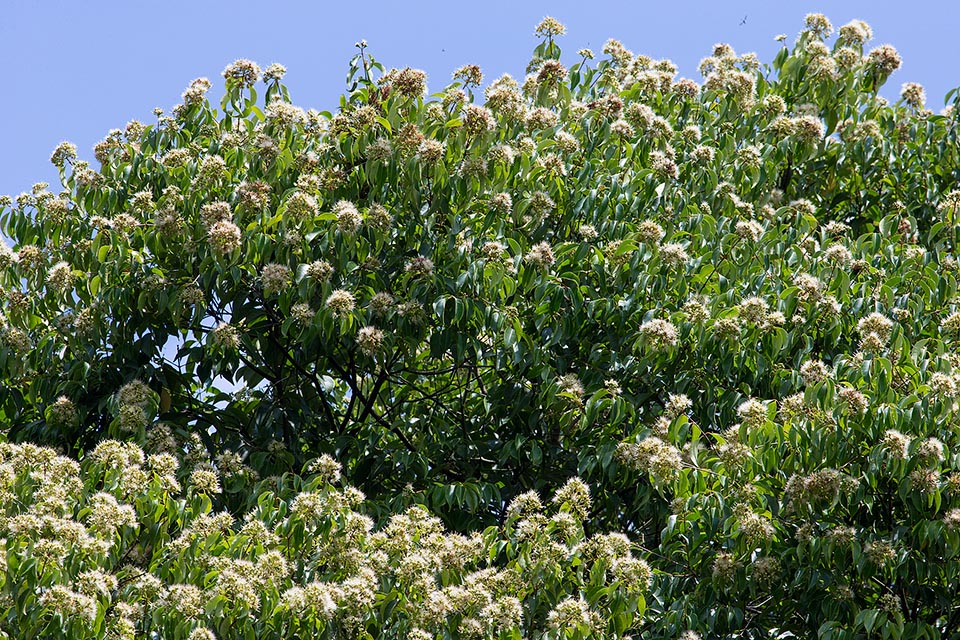 The fruits, that have an acidulous taste, are locally consumed raw or utilized for juices, jams, and alcoholic beverages. The wood, of yellowish white colour, resistant and long lasting, is utilized in the building of dwellings, for common use objects or as fuel. Laboratory studies have evidenced the presence in the leaves and in the fruits of flavonoids, tannins and saponins, compounds that have an important rôle in the pharmacological field, which could be further investigated.