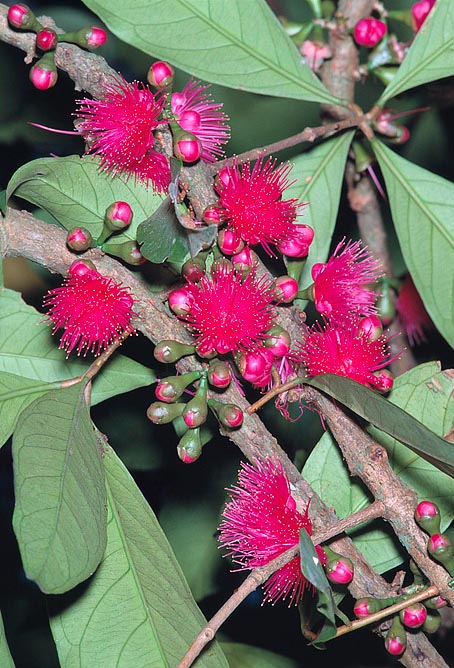 This species is native to Indonesia (Java and Sumatra) and Malaysia, where it grows in the pluvial forests up to about 600 m of altitude.

The name of the genus is the combination of the Greek terms “sys” = together and “zygon” = yoke, with reference to the petals, united in some species; the Latin term of the species refers to one of its origin places, Malacca, a state in Malaysia.

The Syzygium malaccense (L.) Merr. & L.M.Perry (1938) is an evergreen tree with erect trunk up to about 16 m tall, even if in cultivation it keeps lower, and 40 cm of diameter, with elongated canopy, little expanded.

The leaves, on a short red petiole, are simple, opposite, from ovate to oblong, 12-25 cm long and 6-12 cm broad, coriaceous, intense glossy green upper, pale green below.

The inflorescences, which come out directly on the trunk or on the old branches having no leaves, are cymes which do not exceed the 6 cm of length, carrying 2-12 flowers with 4 red or pink, rarely white, petals, obovate and concave, 0,6-1 cm long, and a crowd, up to well over 100, of red, 1-3 cm long, stamina, which are the most conspicuous part of the flower.

The fruits are fleshy obovoid or piriform berries, 4-8 cm long, red, at times white with red stripes, glossy, containing only one globose, rarely two semi-globose, seeds, up to 2 cm of diameter and of pale brown colour. It reproduces by seed, which is to be planted as soon as possible, as it has a short lasting germinability, in a substratum with 50% of coarse sand or agri-perlite, kept humid, at a temperature of 22-24 °C; the germination takes place in about one month, the flowering 7-8 years after sowing; when we want to be sure about the variety we must resort to air layering, cutting, in a sandy substratum, and to the grafting.

It is a species cultivable in full sun, or slight shade, in the tropical and subtropical climate zones, as it does not bear temperatures close to the 0 °C, with high rainfall distributed all over the year, but without stagnations, therefore, if cultivated in seasonal climates, it is to be irrigated during the dry periods; it is not particular about the soil, provided the same is not too much calcareous. The plant has also an ornamental value, due to the foliage, the flowering and the glossy and colourful fruits, and at times, is utilized as shade tree in the parks and on the borders of the roads. It is not widely cultivated for the fruits production, as their white and juicy pulp is deemed by many rather insipid, they are however consumed only on the spot seen their high perishability.

Parts of the plant are variously utilized in the traditional medicine for different pathologies.