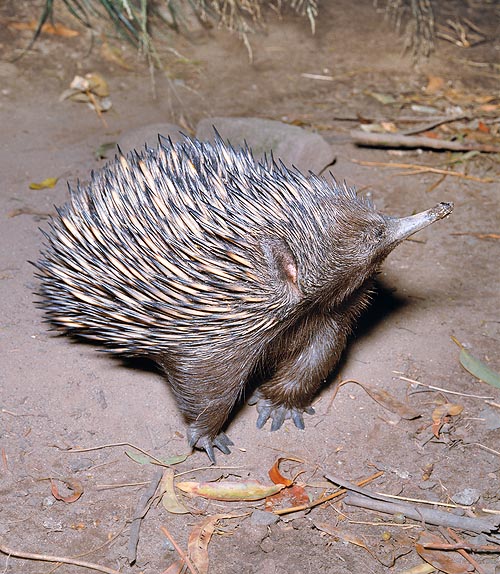 With the name of echidna, belonging to a half woman and half snake mythological monster, are commonly indicated some species of very rare animals leading to the class of the Mammals (Mammalia), infraclass Prototherians (Prototheria), subclass Aplacentals (Aplacentalia), order Monotremes (Monotremata), family Tachyglossids (Tachyglossidae), which subdivide into two basic genera : Tachyglossus and Zaglossus.

The genus Zaglossus counts, on the contrary, three species typical of New Zealand, all three little common and present only in the eastern and western extremities of the island. As a matter of fact, they have never been sighted in the central part.

A first difference between the two genera species stands in fact in the length of the muzzle, called beak, which, in the species of the genus Tachyglossus is shorter, whilst in those of the genus Zaglossus is thinner and longer.

Furthermore, the species of the first genus are characterized by a more or less thick presence of long spines, similar to those of the hedgehogs, from which comes the name of hedgehog echidna for the Tachyglossus aculeatus, whilst in the species of the genus Zaglossus they are shorter and thinner.

The species of both genera are rare and very close to extinction, as per the IUCN. Moreover, their flesh is edible which, after the local populations, are also particularly tasty. 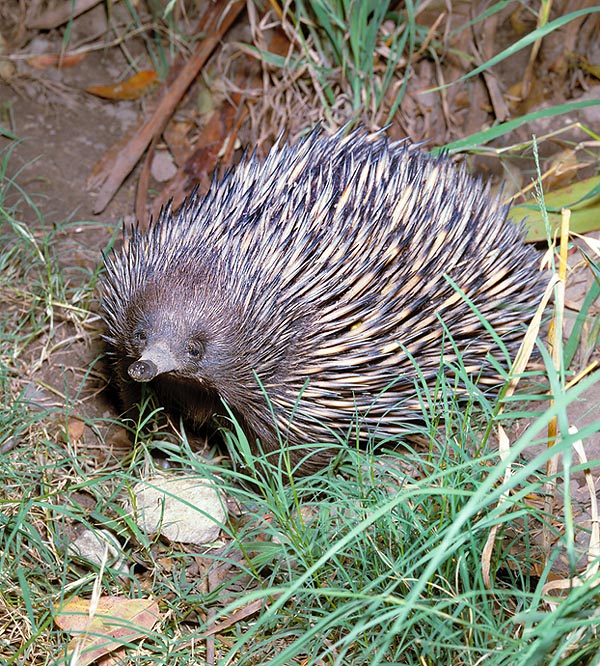 The species of the genus Tachyglossus, endemic to Australia, Tasmania and nearby islets, are subject to a strong ambient pressure, caused by the continuous modifications made by man, by means of a dystrophic urbanization and the intensive agriculture, but, at least, the natives’ hunting has diminished.

The genus Zaglossus, ones, native to New Guinea, if on one hand are less touched by the civilization, the urbanization and the intensive agriculture than
Australia, on the other hand they are still a delicacy for the Papuan tribal populations, which give them an intensive hunting.

All echidnas, spiny anteater included, are terrestrial animals. They love the Rocky locations, placed at a certain altitude, where they dig the soil, relentlessly, looking for insects. They are particularly greedy of termites and ants, which they seize in great quantity, entangling them with their long and sticky tongue. They often overturn even big stones, with an unexpected and unbelievable strength, if we consider their size, and lift the barks of the trees seeking, also there, insects and hidden larvae. Together with the insects, the echidnas swallow always some sand and some pebbles, useful for the digestion seen the particular conformation of their stomach.

In fact, the gastric sac of these odd animals is equipped with strong muscular walls which, acting similarly to the rear stomach, “gizzard” of many species of birds, utilize the swallowed small stones for crushing and pulverizing the shell or exoskeleton of the insects.. 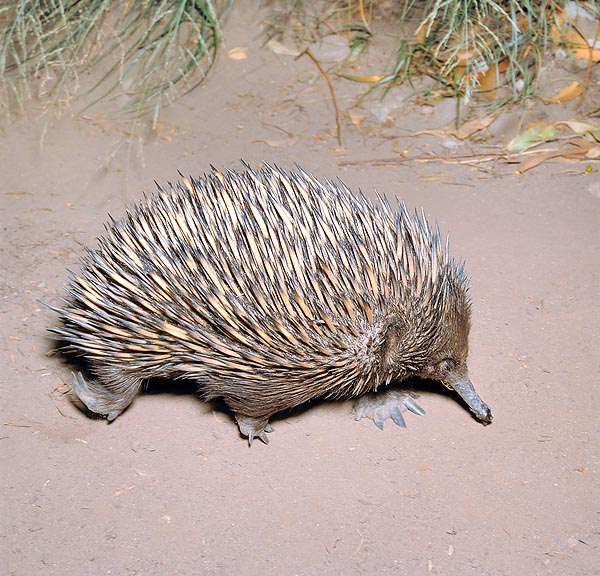 A ventral pouch protects eggs and newborns. The species is much endangered © Giuseppe Mazza

And this is a further vestigial character, should it be needed, which highlights the archaism of this order inside the mammals (see text Monotremata).

We have been already vastly talking in the relevant introductory text of the group about the particularity of the common orifice “cloaca”, towards which flow the digestive as well as the urogenital systems and by means of which the mating happens, unique case in the mammals (common, on the contrary, in the reptilians and the birds), to the point of having determined the name of the order as Monotremata.

The mouth, placed at the rostral apex of the muzzle, is small and circular.

There are no teeth planted into the jaws (and this is also the reason of a so scarce presence of fossil remains of the species involved), but the palate and the back side of the mouth have some keratinous plicae, suitable for grinding the food when this is still in the mouth. The tongue is sub-cylindrical, long and thin, similar to that of an anteater; for such reason, some biologists of the old times did call these animals also spiny anteaters. The body is stocky, dorsally covered by a rugged fur where are intermingled several rigid spines, in the specific of the Tachyglossus aculeatus, these are countless and cover the whole back and the sides of the animal, are even 20-25 cm long, rigid and yellow, with black tip. 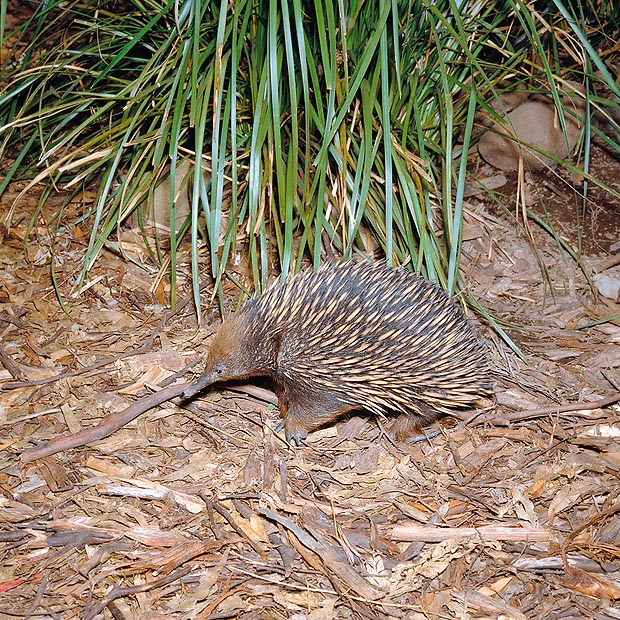 On the head and on the abdomen, however, there are no spines and also the fur is softer. The tail, rudimental, is reduced to a very short stump, so much to appear completely absent at a first, superficial, glance.

The limbs are strong, equipped with very strong curved claws, in a number varying from three to five. These ones are utilized for digging when looking for insects, and also for making holes where these solitary animals may go to rest, or to take shelter for escaping some predator, protecting the belly, which is the most vulnerable part, leaving outside the back with its dangerous spines.

The hind legs appear crooked, as the feet are turned outwards; in the males, these are equipped with a corneous spur, placed on the heel and communicating with a venom gland.

Quite a similar organ, but with a venom with rather more intense action, is present also in the most famous member of this archaic order, the Platypus (Ornithorhynchus anatinus).

The evolutive origin of such organ, as well as its function, in the platypus as well as in the echidna, is still now unknown to the zoological biologists; although some authors have suggested for the platypus a utilization intended for fighting against a conspecific, for the conquest of the female, during the mating season; in the case of the echidna such a role seems absent.

The colour of the spiny anteater, and this applies also to the other species, is dark as the fur is black-brown. For all echidnas the dimensions are not too excessive: they go from 40 to 80 cm. The Tachyglossus aculeatus is the smallest species of both genera, the overall length does not exceed the 40 cm, only one of which, or at the most two, concern the tail. 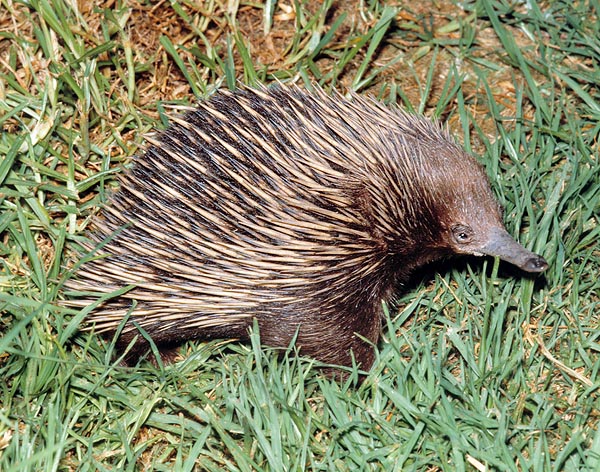 Male and female, if we put aside the presence in the male of the spur with the venomous spine, do not have marked characters of sexual dimorphism, neither seasonal, nor transitory.

With the exception for the reproductive time, falling between July-August, all echidnas of both sexes are animals organized for the solitary life.

They are oviparous mammals. The eggs are telolecithal meroblastic, that is with a big yolk and a partial segmentation, like birds and reptilians. They are white and small, with a soft shell, elastic-membranous, which, for this, recalls more the “cleidoic” egg of the reptilians.

The eggs are not laid on the ground, but kept in an abdominal pouch, where they keep tenaciously attached to the coat thanks to t sticky substance of which they are permeated at the moment of laying.

The puggles, after the hatching, in a number varying from one to three, two as an average, are rather immature and are kept in the pouch, quite comparable to a marsupium, for some time.

The positioning of the breasts allows the puggles to be milked without going out from their friendly haven. After a while, the small echidnas reach a certain size and begin to develop the spines; at this moment, the mother takes them out from the abdominal pouch and moves them to a sheltered and secluded spot which she will actively control gong there regularly for continuing the milking till when they are weaned.