The species is native to a remote area of north-western Madagascar (Analalava District) where is present, with a limited number of individuals, at the foot of a limestone outcrop on deep soils, arid during the dry season, that can last up to eight months, and often flooded during the rain season, at low altitudes.

The genus is honoured to Anne-Tahina Metz, daughter of Xavier Metz, discoverer of the plant; Tahina is a Malagasy female name meaning “blessed by God, protected”.The specific name is the Latin adjective “spectabilis, e” = remarkable, admirable.

The Tahina spectabilis J.Dransf. & Rakotoarin. (2008) is a solitary unarmed species, monoecious, monocarpic (blooms only once and then dies), with 10-18 m tall stem and erect trunk, cylindrical, of up to 50 cm of diameter, on which are evident the rings trace of the junction of the fallen leaves, about 10 cm distant each other. The leaves, on a long petiole whitish at the base, are costapalmate, induplicate, almost circular up to about 5 m of diameter, divided by half the length in segments united in groups, in turn subdivided for a lesser length in single segments. The inflorescence is terminal, erect, pyramidal, ramified, up to 4-6 m long, with a crowd of greenish hermaphroditic flowers with 6 stamina with yellow anthers and ovarium formed by three merged carpels. The fruits, globose to ellipsoid, 2,2-3 cm long and 1,5-2 cm broad, of pale green colour when ripe, contain one globose seed only; once the ripening is completed, the plant, as aforementioned, passes away.

It reproduces by seed, previously kept in water for one day, utilizing fairly deep containers, in particularly draining loam maintained humid at the temperature of 25-28 °C, with germination times of 1-2 months; the first leaflet is palmate. 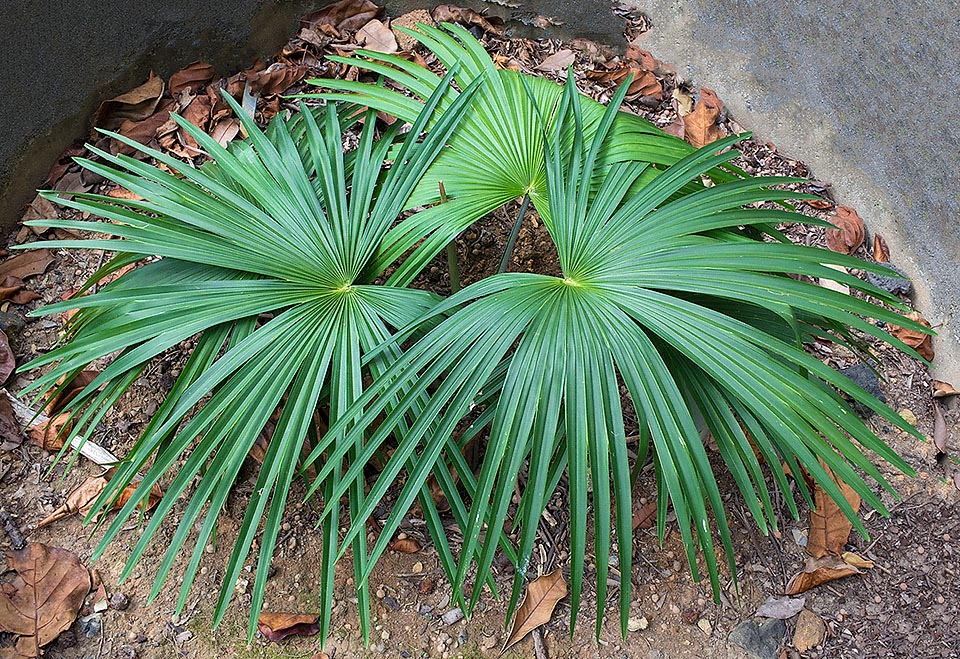 Casually discovered in 2005, Tahina spectabilis of Madagascar is one of the rarest palms in the world. Saved by the seeds of two plants, has now less than 100 adult specimens growing in a modest range, under risk of fires, floodings and grazing. Unarmed, solitary, monoecious and monocarpic, is “Critically Endangered” © Mazza

Discovered by chance in 2005, thanks to the blooming in 2006 of a specimen, has been recognized by the scholars as new species of a new genus, not connected to all other genera of Arecaceae present in Madagascar, genetic studies have in fact suggested its belonging to the Asian tribe of the Chuniophoeniceae. The lucky circumstance of the blooming of a second individual in 2007 has allowed the collection of a remarkable quantity of seeds that initially have been distributed for free to institutions and botanical gardens, local firstly, then outside the island. The rest of the seeds has been later on intended for sale, reserving a large part of the income to the improvement of the conditions of life of the inhabitants living nearby, with the aim of raising their awareness of the protection of the species.

During the first years of cultivation outside the origin area, in tropical and subtropical climate zones, it has revealed of fast growth and not particular about the soil; moreover, the weather conditions of its habitat suggest a high resistance to the high temperatures, to long drought periods, but also to floodings.

Due to the limited number of adult individuals (less than 100) and the restricted area where they do live, subject to frequent fires and to the grazing of animals, the species has been inserted into the red list of the IUCN (International Union for the Conservation of Nature and Natural esources) as “Critically Endangered” (at extremely high risk of extinction in nature in the very close future).