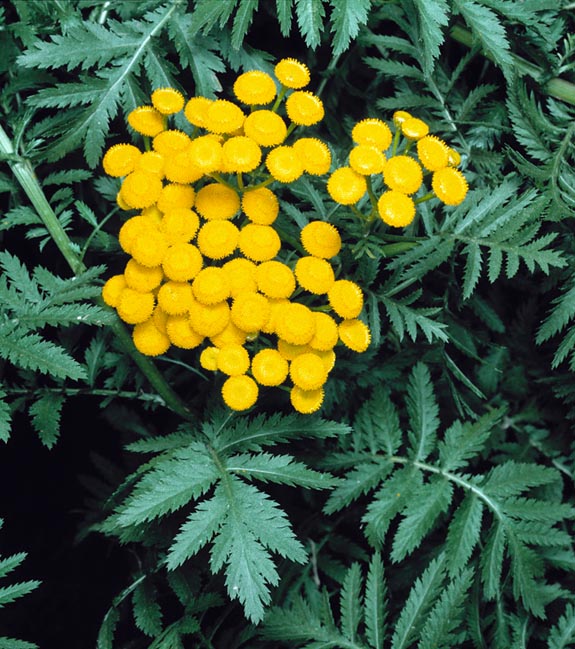 The genus Tanacetum includes, after the Authors, 154-160 species diffused in the temperate regions of the northern hemisphere. The Tansy (Tanacetum vulgare L. 1753), known also as Common tansy, Bitter buttons, Cow bitter, Mugwort and Golden buttons, probably has an Asian origin. Its present distribution is Eurasian (Europe, Asia Minor, Caucasus, Siberia, up to Japan) and has naturalized in the boreal America.

The name of the genus Tanacetum comes from the medieval Latin “tanazita” which, in its turn, dates back to the Greek “athanasia” = immortality, with reference to the long-lasting flowers which conserve without withering; in other texts they refer to the belief that the drinks done with the leaves of this plant would grant eternal life. A legend narrates that the tansy was the cause of the immortality of the wonderful Ganymede, servant of Zeus.

The name of the species vulgare = common in Latin, adds that is a much diffused plant.

It is a perennial herbaceous plant, 50 to 150 cm tall as an average, glabrous or little hairy, with strong aromatic smell, furnished of an almost woody rhizome, ramified, creeping, from which develop several erect, stems, angular, often more or less brownish purple, leafy, simple up to the inflorescence.

Big (25-25 x 5-10 cm), alternate oblong leaves, the basal ones furnished of a 5-15 cm petiole, the cauline sessile, with small basal laciniae, pinnatisect and with toothed rachis and pinnate-partite segments, with jagged edge and dotted-glandular surface.

The flowers, merged in compound terminal corymbs, are carried in hemispheric capitula of 8-11 mm of diameter wrapped by imbricate involucral scales, coriaceous, obtuse, pale, and membranous at the apex. The flowers are all tubulous, yellow, the central ones are hermaphrodite, and the peripheral are female. The blooming goes on from July to September and it is during this period (especially in July) when it’s recommended to carry out (balsamic time) the harvest of the capitula, which are dried up, for the therapeutic uses which, we say at once, are to be employed exclusively under physician supervision seen the toxicity of the active components of this species. The fruits are 1,5 mm achenes, ob-conical, 5-ribbed, with short lobulated coronule, glandular.

The tansy usually grows along the banks of the water streams, at the borders of the country roads and in the uncultivated places, in the prairies and in the pastures, especially on acidic soil. It is often grown as ornament (in particular in its nice variety crispum, employed with other 32 herbs in the fabrication of the famous liqueur Alpestre or Arquebuse) or as medicinal-aromatic plant and becomes wild in the surrounding areas. 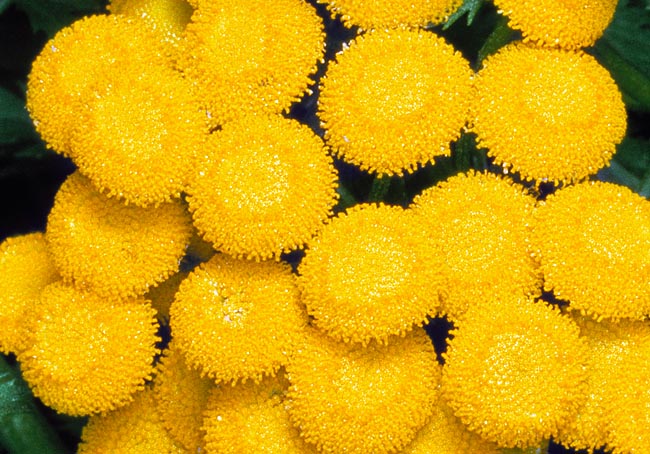 It is a species which easily multiplies by dividing the old tufts in spring or in autumn, otherwise by seed in the same seasons.

The tansy active principles are represented mainly by an essential oil containing thujone (up to the 70%), tanaceton, sesquiterpene lactones (they can cause contact phyto-dermatosis!) a camphor, borneol, pinene and organic acids. At therapeutic doses, the preparations based on tansy are a good anthelmintic against ascarids and oxyurids; furthermore, they have emmenagogic properties and, for external use, have a vulnerary action, that is, healing wounds and sores. They are also employed in the homeopathic medicine and in dermatology to revitalize the aging skin.

In the rural areas where the plant was frequent, they harvested bunches of it and spread them in the chicken coops, in the kennels, in the rabbit cages as repellents against mites, fleas and ticks, as well as in the barns for driving away the insects nourishing of kernels and the mice, and also against the moths in the closets. The decoction of flowers is used for colouring the wool (previous mordanting with alum and cream of tartar) of a very nice yellow colour. In England, this plant is used in small quantities for aromatizing a traditional cake eaten during the Easter festivities. In the Mediterranean area, they did put a pinch of crushed leaf into the vegetable soups and omelettes.

Several cases of intoxication have been reported due to the use in cooking of fresh leaves and flowers in excessive quantity as well as for therapeutic use in high doses or assumptions. This has caused abdominal pains, vomit, gastroenteritis, internal bleedings, miscarriages, kidney and very serious liver lesions. Therefore, we recommend once again refraining from the familiar use of this plant, which is to be used very carefully under close medical supervision.

Tanacetum vulgare was last modified: May 4th, 2018 by Giuseppe Mazza