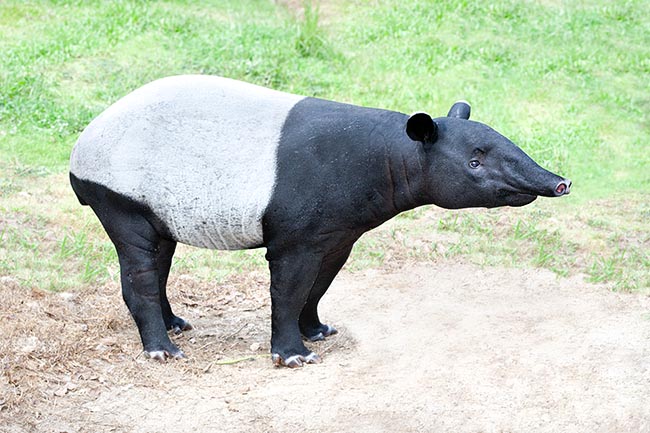 The Malayan tapirs, members of the only genus Tapir (Tapirus), are placental eutherian mammals afferent to the order of the Perissodactyls (Perissodactyla) and to the family of the Tapirids (Tapiridae).

To such order, are afferent also the equids and the rhinocerontids.

Extremely interesting is the geographic distribution of these mammals in central-southern America as well as, with only one species, the Tapirus indicus, also in south-eastern Asia.

As a general rule, the tapirs of the Old as well as of the New World are somewhere in between a big pig and an hippo; like this one, it loves to frequent, in both terrestrial areas, the rivers and the ponds where it remains immersed for long time and where it is able to walk.

The Asian tapir, or Malayan or of the saddle-cloth (Tapirus indicus Desmarest, 1819), here treated, is the only species in the Asian region. 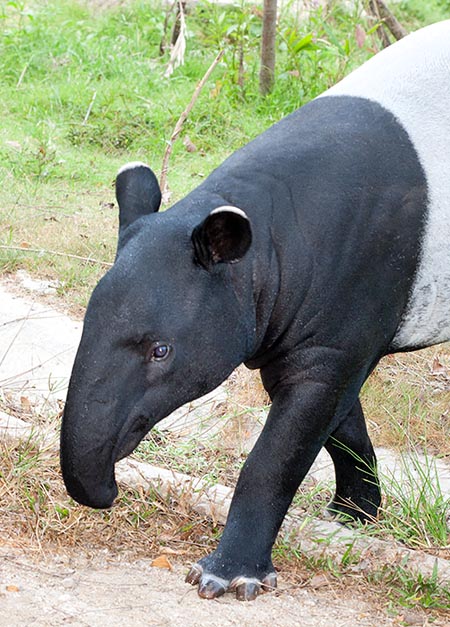 The saddle-cloth tapir lives in Siam (that is, Thailand), the peninsula of Malacca, Sumatra and Borneo islands.

This perissodactyl, known in Europe only since the half of the XIX century, even if in its origin countries it was not too rare, is on the contrary known by the Chinese since the ancient times and was called by them under the name of “mé”.

Nowadays, the International Union for Control of Nature (IUCN) sets its status as and “endangered” species, that is, EN (endangered).

This animal frequents the humid forests rich in ponds and marshes, places it frequents mainly during the night hours.

It is even one metre tall at the withers and reaches the length of about two metres and a half, with the tail reduced to a simple rudiment. The trunk is stocky, the ears are fairly big and of oval shape; the head is elongated and ends in a muzzle prolonging in a proboscis which is long at most a thirty centimetres.

The hair of this tapir is extremely characteristic, and this allows distinguishing it at first sight from its congeners. Very dark (black or dark gray), on the fore parts and on both pairs of legs, whilst it is whitish on the belly and on the rump, so much that the current name of this perissodactyl is amply justified; for saddle-cloth it is in fact meant an ornamental tissue usually placed on the rump of animals (mainly equids), during parades and folkloric celebrations. On the other hand, the hair is thick and very short.

The colouration of the young tapirs is completely different, and has a purely mimetic function; in fact, on a blackish background stand out very pale dots and lines.

It mainly nourishes of aquatic vegetables and of tender leaves, which skillfully picks up by utilizing its mobile proboscis. 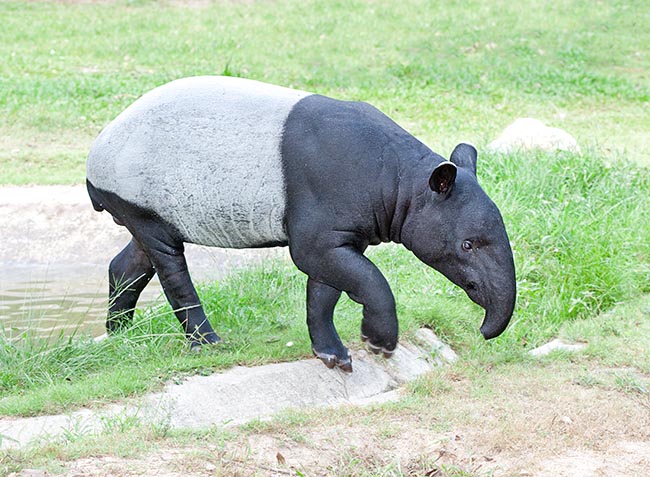 It is a shy animal and with a very fearful character.

It moves with extreme caution in the thick vegetal bush, united in family groups or in little numerous small herds, showing itself rarely to the local populations themselves.

If it feels too closely menaced, it does not hesitate in diving into the water where it swims with great confidence, thus being able almost always to escape the dangers. It seems that it is capable to remain underwater for a long time, without needing to emerge too often for changing its air reserve.

The female, after a more than thirteen months gestation, gives birth to one, or, more rarely, two offspring.

Other species of tapirs do live in the New World, more precisely in central-southern America.

They are the American tapir (Tapirus tapirus, till the seventies of the last century called Tapirus americanus), the Mountain tapir (Tapirus roulini) rather rare and the extremely rare, and maybe already extinct, Baird’s tapir, called also Mountain cow (Tapirus bairdii).