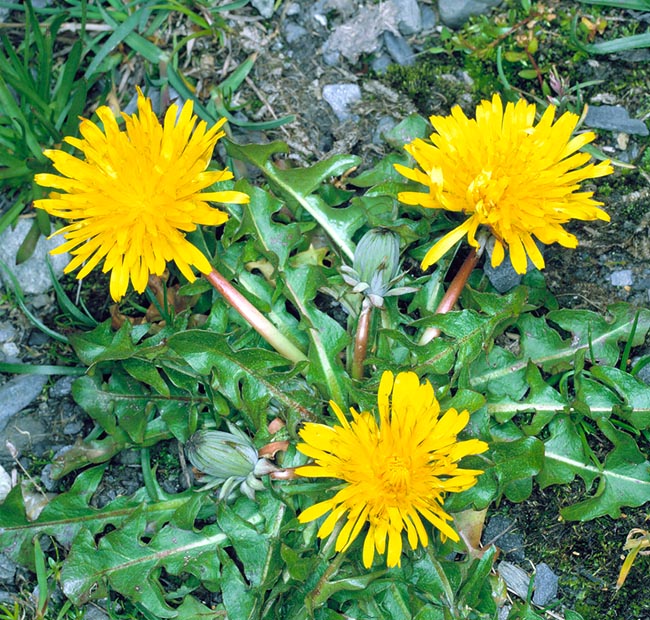 The Common Dandelion (Taraxacum officinale Weber Aggreg.) has a circumboreal distribution: its very vast range extends to the whole Europe, northern Africa, Siberia, North America and, thanks to the man, in many other parts of the boreal hemisphere.

The likely origin of the name of the genus refers to the Greek epithets “taraxis”, “taraxakos”: I cure, due to the medicinal virtues. For others, from the Arabic “tarahsaqun” or “tharachakon” (bitter herb) which rightly indicates, dandelion, or from the terms “tarak” (to do) and “sahha” (urinate), seen the diuretic properties of this plant. Or, more, it should come from the Greek term “tarasso”, turmoil, upheaval, because the mature pappi are dispersed by the slightest breath or gust of wind.

The name of the species “officinale” comes from the Latin substantive “officina”, used for many plants having medicinal properties employed in the “officinae”, as were once called the pharmacies.

In the binomen Taraxacum officinale are included a complex of extremely polymorphous apodictic species. Of this genus result described about 1600 entities, still under revision. The general characters are: perennial herbaceous plants, 15-40 cm tall, with lobed or runcinate, with lobes more or less triangular and with often winged petiole, all in basal rosette. The stems are smooth, simple, without leaves, tubulous, that, when broken, emit a whitish latex. The flowers, all ligulate, are assembled in yellow capitula of 2,5-4 cm of diameter with a 12-25 x 15-25 mm involucre, linear-lanceolate (their characteristics have a taxonomic importance!) up to 17 cm long.

The flowering takes place from February to May (sometimes the whole year), and is concentrated in spring in characteristic contemporaneous antheses. The fruit is a 2,5 x 3-5 mm achene, fusiform or oblanceoloid, tuberculate or spinulescent, brown, with 7-15 mm beak equipped with showy white pappi arranged in soft spheres, commonly called “clocks”.

It is a synanthropic species frequent in the manured lawns, in the fallows, ruderal areas, clearings of the deciduous woods, from the plain up to 1700 m above the sea level. 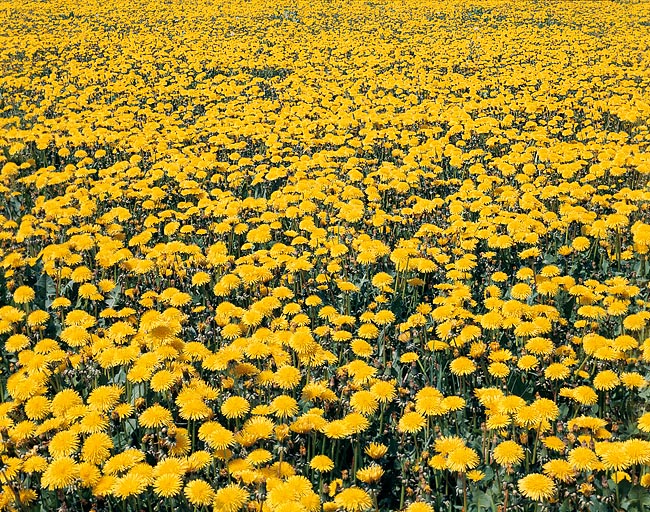 Cultivated field. The plant is edible with cosmetic and medicinal virtues © Giuseppe Mazza

The reproductive capacity and that of adaptation of this aster is extraordinary, not only due to the level of aerodynamic perfection reached by the achenes which are carried by the seasonal winds and parachuted at quite remarkable distances, but also due to the deep taproot roots capable to rebuild new sprouts even if reduced in small pieces.

The taraxacum, better known under the vulgar names of dandelion, clock, false salad, yellow chicory, head of the brothers, bedwetting, etc., deserves to be praised due to its gastronomic merits: it is an excellent vegetable to be consumed fresh when young (February-March) or cooked (later on).

The young basal rosettes, like all wild vegetables, must be harvested only in healthy locations, far away from trafficked roads, from factories, from lands where the grazing cattle has stayed or on which have been employed, more or less recently, herbicides or pesticides.

The dandelion in Italy is included into the list of the spontaneous officinal plants (Royal Decree no. 772 of 26.05.1932) and therefore its harvest is authorized after such disposition and that for family utilization the possession is authorized up to 5 kg of dried roots. For herbal uses, are to be pulled out from the soil the taproots from April to September (balsamic period).

The main ascertained properties are choleretic and cholagogue (promoting the discharge of the bile and its drainage in the bowel) and consequently favouring the digestion of the fats (with consequent normalization of the cholesterol rate in the blood), hepatoprotective, bitter-tonic, appetite stimulants, diuretic, depurative, slimming, antirheumatic, slightly laxative, antiacne. 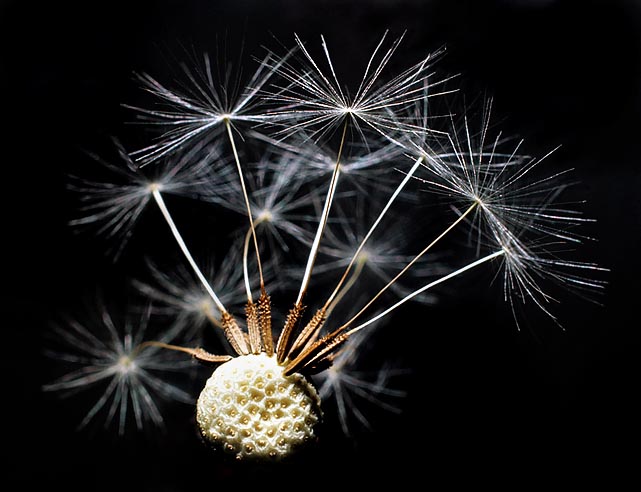 The root, dried or fresh, is used in all the hepatobiliar troubles, in the dyspepsies, lacks of appetite and reveals a good diuretic, useful in the treatment of the water retention, especially if associated to obesity and cellulitis. For external use, the latex seems having proven useful for regressing warts and verrucae.

The preparations made from dandelion are contraindicated in subjects with micro gallstones and in subjects suffering from peptic ulcer. Recently, it has been proved that in the pollen of the capitula of dandelion are present substances able to stop the development of some bacteria.

The young leaves are collected by late winter and furnish an excellent vegetable to be consumed fresh or cooked.
The root, boiled and dressed with extra virgin olive oil, is excellent and healthy. In cosmetics, the infusion of the flowers is used as lotion for lightening ephelides and lentigos. The first buds can be preserved in salt or in vinegar like the capers and their roasted root equals that of the chicory as substitute of the coffee.

Cholagogue infusion useful for liver failure and in its congestions

A spoon of crushed dried root in a pot of water. Leave to boil for two-three minutes and leave the infusion to rest a quarter of an hour, sweeten and drink before the meals. To often consume the raw leaves in salad during the meals.

A handful of flowers and one of leaves (both fresh). Leave to boil in one litre of water to reduce to one third. To dab locally and frequently with cotton wool soaked in the lukewarm decoction.

Decoction depurative and contrasting the formation of gallstones

A teaspoon of crushed rhizome in a pot of water: to boil for a quarter of an hour, then allow to rest ten minutes, filter, sweeten with honey. To drink lukewarm twice a day far from the meals. It is also suggested to consume, in spring, raw salads of roots and leaves.

Taraxacum officinale was last modified: May 26th, 2020 by Giuseppe Mazza