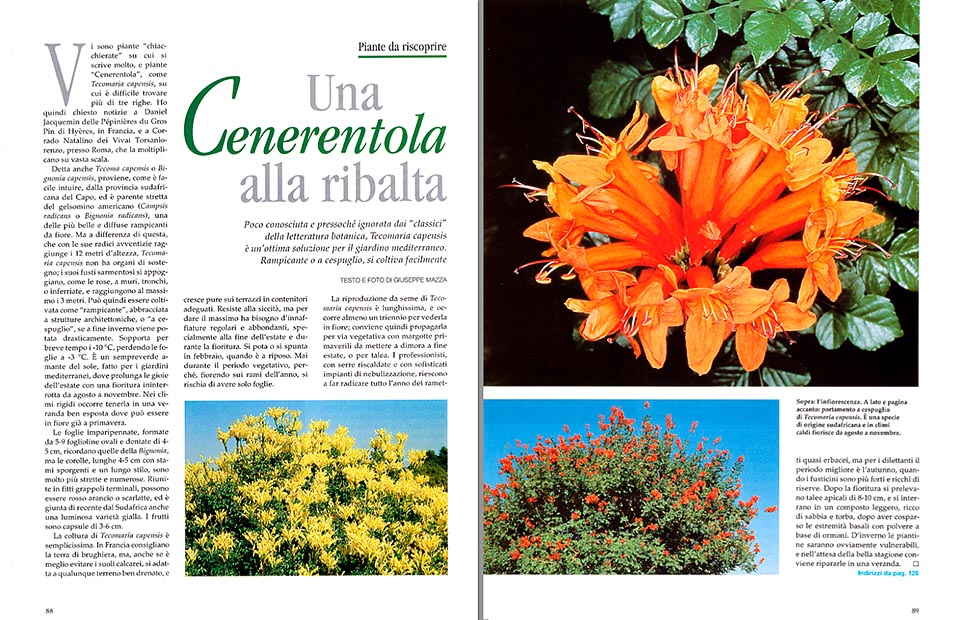 There are “talked plants”, of which much is known, and “Cinderella plants”, like the Tecomaria capensis, of which it is difficult to find more than three lines.

So, I have asked informations to Mr. Daniel Jacquelin of the Pépinières du Gros Pin of Hyères, in France, and to Mr. Corrado Natalino of the Torsanlorenzo, close to Rome, which are multiplying it on wide scale.

Called also Tecomaria capensis, or Bignonia capensis, it comes, as it is easy to peceive, from the South African Province of the Cape, and is close relative to the Bignonia, or Trumpet vine (Campsis radicans), one of the nicest and most common flower climbers.

But unlike this one, which, with its temporary supporting roots reaches the 12 metres of height, the Tecoma capensis does not have organs of support. Its sarmentose stems, lean, like the roots, to walls, trunks or gratings, and reach at the maximum, the three metres. It can be, therefore, cultivated as “climber”, hugged to architectonic structures, or as “bush”, if by the end of winter it is pruned drastically.

It bears, for short time, the -10 °C, losing the leaves at -3 °C, but is an evergreen which loves the sun, fit for the Mediterranean gardens, where it extends the joys of the summer, with an uninterrupted flowering from August to November.

In the cold climates, it must be kept in a well exposed veranda, where it can be blooming already in spring.

The leaves, odd pinnate, formed by 5-9 oval, dentate small leaves of 4-5 cm, recall those of the Bignonia, but the corollas, long 4-5 cm, with jutting stamens and a long style, are much more narrow and numerous. United in thick terminal clusters, they can be red-orange or scarlet, and, recently, a luminous yellow variety has come from South Africa.

The fruits are long capsules of 3-6 cm.

The cultivation of the Tecoma capensis is very simple.

In France, the suggest the land of moor, but, even if it is better to avoid the calcareous soils, it adapts, generally, to whatever well drained soil, and grows up also on the terraces, in adequate containers.

It resists to drought, but, for giving the maximum, it needs regular and abundant watering, particularly by the end of summer, and during the blooming. It is to be pruned or sprouted in February, if needed, when it is resting; never during the vegetative period, as, blooming on the branches of the same year, we would risk to have only leaves.

The reproduction by seeds of the Tecoma capensis is very long and at least three years are needed before seeing it in flower. It must be, therefore, propagated by vegetative way, with spring layers, to be put in place by the end of summer, or by cutting.

The professionals, having warmed greenhouses, and sophisticated nebulizating plants, can have small, almost herbaceous, branches rooting all the year round, but for the amateurs, the best period is autumn, when the small stems, semi-woody, are stronger and rich of reserves.

You must take off, after the flowering, 8-10 cm apical cuttings, and inter them in a light compound, rich of sand and peat, after the usual hormonal treatment. When the winter will come, the small plants will be, obviously, vulnerable, and, while waiting for the good season, it will be convenient to shelter them in a veranda.