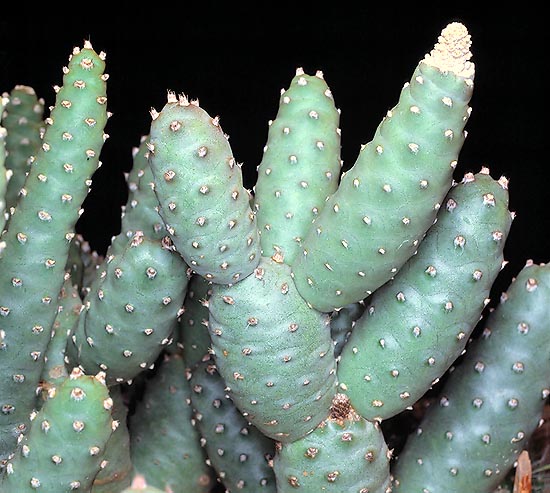 Cespitose form and small tufts, rather messy, tall up to 30 cm © Giuseppe Mazza

The plant is native to western Argentina (provinces of Catamarca, Cordoba, La Rioja, Mendoza, Salta, San Luis and Santiago del Estero), where it grows in semi-arid zones, characterized by a cool and dry climate in winter and warm, with rare rainfalls, in summer, more frequently between the 500 and the 1.300 m of altitude.

The name of the genus is the combination of the Greek word “tephra” = ash, with reference to the colour of the epidermis, and Cactus; the Latin name of the species, “articulatus” = knobby, refers to the stems which are subdivided in fragments.

The Tephrocactus articulatus (Pfeiff.) Backeb. (1953) is a much variable plant forming small tufts, rather messy, usually tall up to about 30 cm, with ramified stems, erect or prostrate, formed by a sequence of globular, ovoid or almost conical (pine-like) segments, of 2-4 cm of diameter and long up to 5-10 cm, which detach very easily. It has a grey epidermis and tubercles, initially evident, spirally placed, with small areoles, almost round, woolly, with several glochids (tufts of thin thorns long a few millimetres), of a brown colour.

The areoles are often unarmed, when present, in a number from 1 to 4, they are flat, thin, flexible and with a papery appearance, of white or brownish colour, up to 10 cm long, more in some instances, and 4-7 mm broad. The bell-shaped flowers generate from the areoles placed in the terminal part of the segments, are 4-5 cm long and 3-4 broad, with green ovary, covered by glochids, and obovate petals with white truncated apex, at times slightly pink, or pale yellow; the stamina are yellow. The globular fruits, of about 15 mm of diameter, with truncated and depressed apex, dry when ripe, have a reddish green to brownish colour, with glochids persisting on the surface.

The seeds are fully surrounded by a brown aril formed by a tissue, aerenchyma, with ample intercellular spaces which allow the passage of the air; this helps the dispersion by means of the wind (anemophilous) or the water, by floating, during the few frequent, but violent, rains. It very easily reproduces by its seeds which are to be simply laid on the soil. 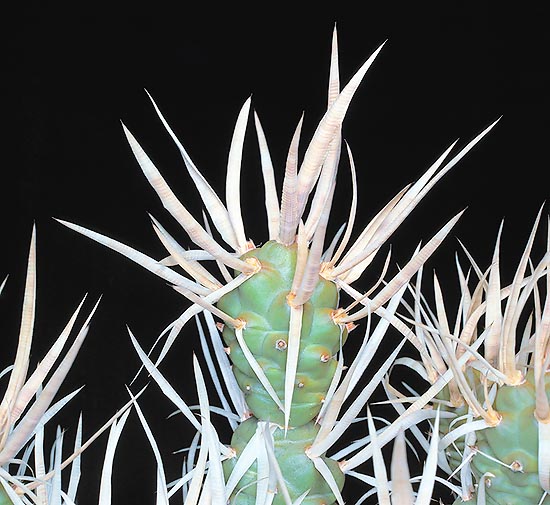 Usually no thorns, but in some varieties they are flat and papery, even 10 cm long © G. Mazza

Its intrinsic variability, in particular with regard to the thorns, which may be completely absent or with much varying shape and length, and the shape and dimension of the segments, has contributed in originating several synonyms and varieties.

Plant of easy cultivation, it is to be placed in full sun, for a compact growth and an abundant blooming, on particularly porous and draining substrata, which may be formed by common fertilized common garden earth, coarse sand (or agri-perlite) and crushed dustless stone in equal quantities.

The best collocation of cultivation in open air are the rocky or sandy soils, arid or semi-arid, in climates characterized by cool and dry winters and by warm and little rainy summers, in these conditions it looks to stand temperatures as low as -9 °C, but it is better, for prudence, not to expose it to temperatures close to 0 °C, especially if in presence of humidity.

Where the climate does not allow the cultivation in open air, it is to be cultivated in pot, with the same aforementioned modalities, in order to shelter it in winter. In summer, during the vegetative period, it is to be occasionally watered, in winter it is to be kept dry and at temperatures possibly between +5 and +10 °C, this period of dry and cool rest helps its blooming.

Tephrocactus articulatus was last modified: May 9th, 2018 by Giuseppe Mazza