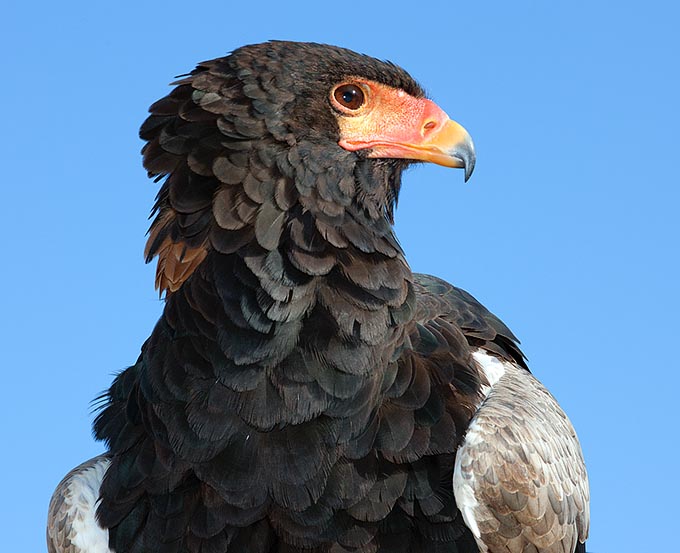 Atypical eagle, Terathopius ecaudatus lives in many African regions and in the south part of the Arabian Peninsula © Giuseppe Mazza

Along with the odd Long-crested eagle (Lophaetus occipitalis), is considered as one of the two atypical eagles of Africa.

When observing the bateleur while flying we have immediately two different reactions, the first that it is not a bird flying but a kite or some artefact or else, once realized that it is a bird, an impaired animal that has accidentally lost the tail or part of its avian apparatus. The second, that it cannot keep flying for long time and that it’s about to fall any moment.

Watching it flying really gives the impression to have major difficulties in soaring and his is the presumable reason why he who has seen it the first time has given it this nickname.

Rightly, a juggler because this bird moves the wings in such a strange way, beating only the extreme tip and at times alternating them, that it appears to be playing and at the same time trying to remain precariously balanced on these wings that appear disproportionate in the silhouette, because of the almost absolute absence of the tail. Like for us humans when we try to keep the balance on a tight wire. 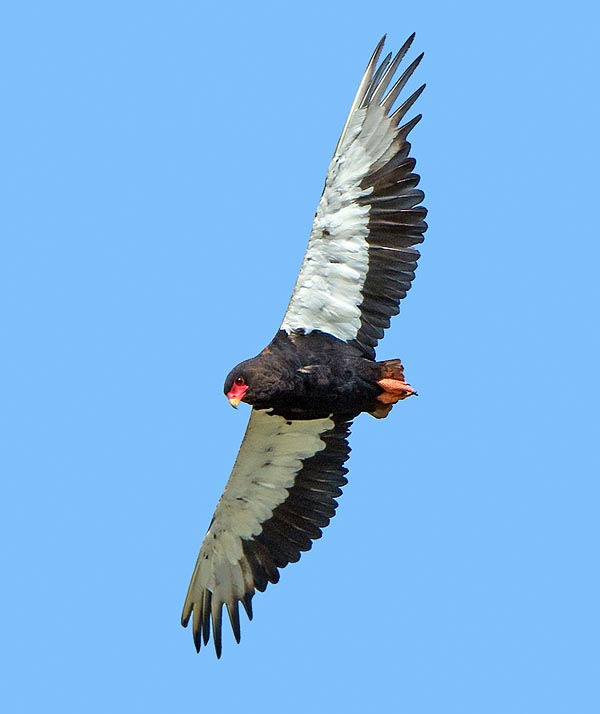 It's called bateleur due to its odd flying way, like if it were in precarious balance like an acrobat © Gianfranco Colombo

From its alar drawing this bird results absolutely unmistakable and unforgettable at the same time.

However, this bird has a strong and tireless flight that allows it to remain flying for more than three quarters of the time available.

It is seen travelling at high speed and with straight flight at a short distance from the ground, on its very wide hunting ground looking for preys, driving along in its to and fros even many hundreds of kilometres per day.

Its vulgar denomination has been taken from the French bateleur that rightly means tumbler, street performer or juggler precisely for the reasons cited above.

Other nations have verbatim copied this term: in English Bateleur; in Dutch Bateleur; in French Bateleur de savane; in Spanish Aguila volatinera, in Portuguese Aguia bailarina.

The scientific binomial has as for the genus Terathopius a derivation from the Greek “teras, teratos” = astonishment, sudden surprise, whilst the species ecaudatus rightly means in Latin tailless.

This raptor it is the only member of the genus Terathopius.

As usual in various African nations, adopting as national emblem animals representative of their regions, this bird has been chosen by Zimbabwe and, stylized, impressed on their flag.

What in the old “Kingdom of Zimbabwe” had been called “the Zimbabwe Bird”, of which some stone depictions have been found in the local archaeological sites, was, at the time of Cecil Rhodes, initially chosen as emblem of Northern Rhodesia and later on passed to the present Zimbabwe.

This raptor is a purely African species even if some individuals are present in the extreme southern areas of the Arabian Peninsula.

It lives in a very wide territory going from the sub-Saharan Sahel until to touch South Africa but is absent in the western equatorial zone of the continent, in particular in the Congo River basin. Being a bird of prey that avoids the highly wooded and with scarce visibility zones, unsuitable for birds having the air reconnaissance as their main activity, it in fact keeps away from the forests and any covered area.

It is considered as a sedentary species though the young during their first years of life, perform also wide ranging displacements, presumably looking for new territories.

The bateleur lives particularly in pre-desert areas and in extensive savannahs also close to the coasts. It frequently flies over the edges of the forests but never going into them and can live on the grassy highlands up to the 4000 metres of altitude even if the ideal one is standing under the 2000 m.

Even if sometimes feeding on dead animals, its choice preys are terrestrial birds it surprises from above during its air reconnaissances and on which it swoops in rapid descending spirals. The black-bellied sandgrouse, the Namaqua sandgrouse and the sandgrouse (genus Pterocles) stand among its preferred preys but it nourishes also of doves and pigeons as well as of reptilians and of small mammals. Occasionally it assails also animals in distress or injured.

Like all birds of prey also the bateleur is subject to poaching and to seizing for illegal trade, moreover it is also affected by the use of poisoned baits scattered by the countrymen for the struggle against the harmful rodents.

By the beginning of the last century this bird was erroneously pointed out as the major culprit of the stealing of animals and birds from the farms and consequently eliminated with absolute ease by the local farmers. It is not a rare bird and is well diffused in its range, but the continuous decrease hitting in the whole all raptors populations, has led the authorities to insert this eagle among the species to be carefully observed. 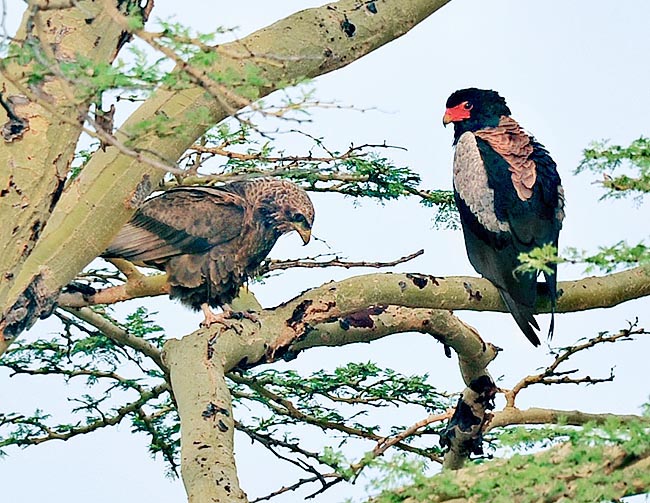 Adult with young. The nest, usually on top of thorny and inaccessible trees, hosts only one egg © G. Colombo

The bateleur is a raptor of discreet dimensions and can reach the 75 cm of length, a wingspan of more than 170 cm and a weight of more than 2 kg.

Its livery is fairly variegated in the colours having the body almost totally black, with rusty back and alar coverts grey brown crossed by an ample white belt that results well evident when flying.

Furthermore, its cere is bright red and well visible from far away as well as when flying and yellowish red beak with black tip. The very short tail is also black and displayed when in flight. It has a such reduced length to correspond to the width of the wing. Also the paws are reddish.

While flying, the wings, fairly ample in width and strongly round in the lower fringe, evidence primary feathers remarkably longer than the normal and even in the first four we note a length double than in the following ones. An aerial functionality necessary to keep the right balance during its flight. The female is practically similar to the male even if basically greyer in the usually black parts whilst the young are completely brown with facial greenish cere. 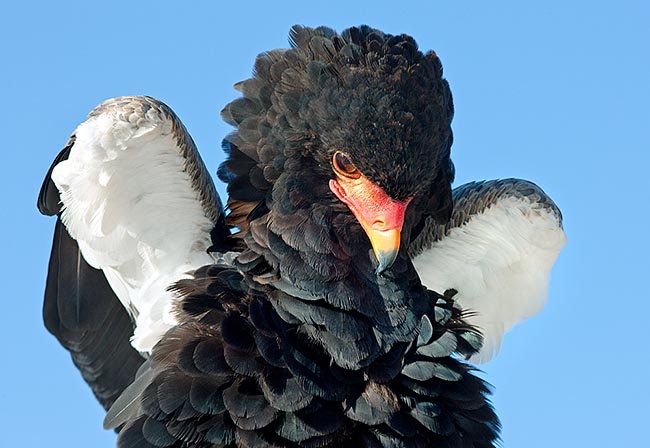 These birds are monogamous and nidify on tall trees usually thorny and inaccessible, where they pile up twigs and dry branches to create a flattened platform.

They are quite silent birds but during the defence of the territory ans during the wedding time they emit pretty sharp shrieks and guttural sounds.

They are very routine animals and often the use again the same nest for various years, piling up continuously new material.

They practically nest all over the year in accordance with the climate conditions of the various occupied areas.

They lay only one whitish egg with ochre dottings, that is hatched by the female for about 6 weeks.

The male takes care to provide food to the female during the hatching and also to the chick during the first weeks of life. The young keeps in the nest for more than 4 months. Like the true eagles, these birds are quite slow in their growth and reach the sexual maturity and get the adult livery around the 8 years of age.