The Land turtle or Hermann’s tortoise (Testudo hermanni Gmelin, 1789), one of the most known turtles to the beginners and to the breeders of tortoises, is a member of the group of the Anapsids (Anapsida , see text Chelonia for the relevant meaning), afferent to the class of the Reptilians (Reptilia), order of the Chelonians (Chelonia), family of the Testudinids (Testudinidae), genus Testudo.

The IUCN considers nowadays the status of this species of tortoise, as well as, anyway, also a race or subspecies, the Testudo hermanni hermanni, as rare.

Whereby, the CITES, as well as the IUCN itself, has declared this reptilian as a “protected species” due to the low density of population it has reached progressively in the time, starting from the eighties. The collectors’ catches, as garden animals, the killings for food (eggs included), and the utilization of the carapace for fancy goods and feminine trinkets, have in fact almost led the Testudo hermanni to the extinction. Nowadays, the major threats, which still place in danger the remaining populations, are represented by the fires, resulting in the destruction of the habitat, and by the high traffic on the roads.

The Hermann’s tortoise is present in the whole southern Europe, Italy, France and Spain included.

It loves frequenting typical zones of the Mediterranean Thicket, that is, rich in vegetation with shrubs, therefore localizing more in the “low Thicket” of this biotope, rather than in the “high Thicket”. It also frequents areas with sandy dunes and pastures. Its is an animal specifically with diurnal activity, whilst during the night it tends to rest, provided it is not disturbed. It mainly eats vegetables: i.e. plants of various types, preferably leafy, but it loves also nourishing of succulents and cactaceans, from which it gets the needed water; it rarely integrates the diet with snails and earthworms.

The Hermann’s tortoise has a carapace going from the yellowish-brown to the dark brown colour, with pale spots, which become more and more overlapped by dark pigments, as the animal gets old; this happens in the male and also in the female. 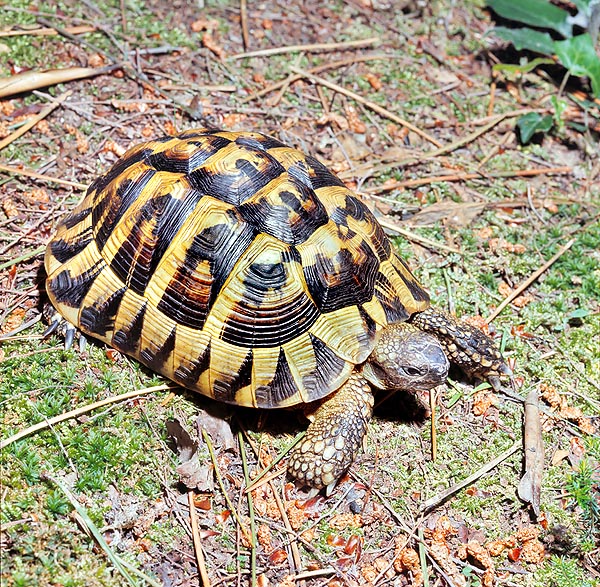 The Testudo hermanni is often mistaken with the Greek tortoise (Testudo graeca), whose scientific name comes from the pattern drawn on the shells of the carapace, which recalls the Hellenic motif of the mosaics. But the Hermann’s, vis-à-vis the Greek one, has a more domed carapace; the shells themselves of the carapace have such conformation. Hermann’s tortoise male and female have differences, not only in the length of the tail, bigger in the male and wider at the base, compared to the female’s one, but also for a major density of black spots on the male’s plastron, compared to the female which is also more flattened; the males, moreover, are smaller than the females.

Both tails, the female’s one (shorter) and the male’s (longer and broader) end in a small spur, whilst, the inguinal level, male and female doe not have such structure, present, on the contrary, in the Testudo graeca.  This last morphological difference, associated to the shape of the carapace, as said before and to the typical shells overlying the tail in both sexes of the Testudo hermanni, are the characters distinguishing the two species.

Both sexes do have forelegs with long nails for digging and club-shaped hind legs, with short nails, for walking. The dimensions for the Hermann’s tortoise vary from 15 to 20 cm; usually the males measure 15-17 cm, the females may reach the 20 cm.

By November or December, depending on the latitude, they begin to bury themselves or to take shelter in protected locations and “hibernate”; this happens for both sexes. The entrance of this physiological condition, which lasts, as an average, three months, will cease by spring, period when the ambient temperature becomes more convenient for an animal that, even if being a reptilian, consequently ectothermic, or poikilothermic or eurithermic, it does not bear the rigid temperatures. The beginning of the hibernation is preceded, in the late autumn, by a phase when the tortoise becomes more apathetic, stops nourishing, emptying completely the bowel, and then burying even to about 20 cm of depth.

The females of Testudo hermanni, may be capable to conserve the sperm of the male in a receptaculum seminis, structure called spermatheca, present in the oviduct even for 3-4 years if the local conditions, such as the availability of food and water are not unfavourable; the reproduction, being these gonochoric species, is always of amphigonic or amphimictic type, that is as result of the fecundation of an ovule by a spermatozoon.

The species is oviparous; the female will lay from 2 to 10 cleidoic eggs of a dirty white colour, even up to four times per year, from May to July. The eggs, buried into a hole dug by the mother, have an incubation time of about 2-3 months, and the sex of the young to come to life, in relation with the ambient temperature.

At incubation temperatures under the 31,5 °C, mainly males come to life, at upper temperatures, essentially females will come. The sexual maturity is reached by around the tenth, eleventh year of life, and they may live even more than a hundred years!