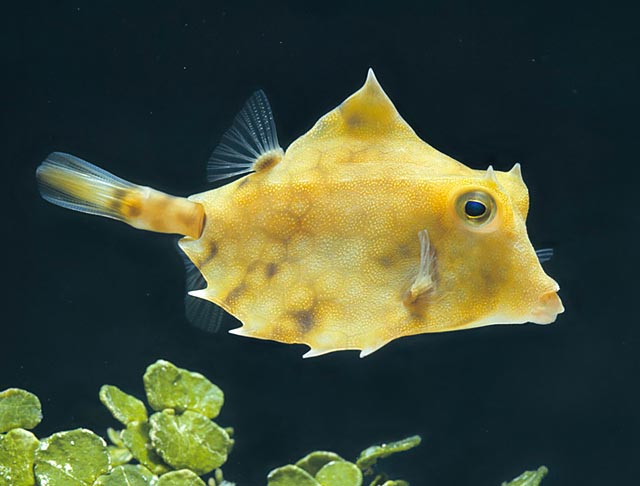 The Humpback turretfish (Tetrosomus gibbosus Linnaeus, 1758) belongs to the class of Actinopterygii, the ray-finned fishes, to the order of the Tetraodontiformes and to the family of Ostraciidae, the so-called Coffer or Box fishes.

The name of the genus comes from the Greek “tetra” = four and “soma” = body, due to the quadrilateral structure of the body.

The name of the species comes from the Latin “gibber” = hump, therefore, “with the hump” due to the profile of the back.

It is present in the tropical waters of the Indian Ocean and in the western part of the Pacific. As an indication, we find it from South Africa and Madagascar, to the Red Sea, from where it has passed in the adjacent Mediterranean through the Suez Canal, to the Seychelles, the Maldives, India, Thailand, Australia, Indonesia, New Guinea, Philippines, Taiwan and China up to the southern part of Japan. Southwards, it reaches the New Caledonia.

It swims between the 40 and 110 m of depth, also off the coral reef and in the contiguous submarine prairies, on the sandy, detrital and muddy bottoms, where, seen that it is not a very good swimmer, the waters are calm and it can calmly look for food.

The body, with triangular section, is formed, as its scientific name suggests, by four sides, considering the frontal part. It can reach the length of 30 cm even if it exceeds, rarely, the 20 cm. Like all boxfishes it is protected under the skin by a carapace formed by hexagonal plates with holes in correspondence to the eyes, the mouth, and the fins, useful also for the gills and the anus. 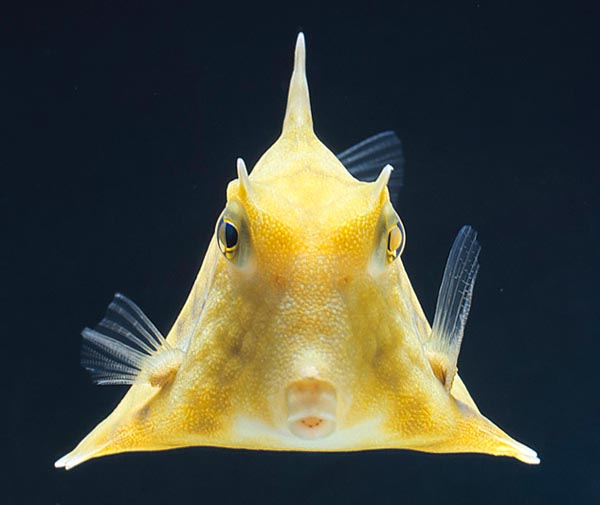 The body is perfectly triangular, the mouth is done for moving the bottom © Giuseppe Mazza

It has two small horns over the eyes and especially a pyramidal outcrop on the back, for which it got the term of hunchback. Also the lateral edges are armed with defensive spiny protuberances.

The colouration varies from the sandy yellow to the blue, in the adult individuals.

As for the Ostracion the skin emits defensive poisonous mucus, and in the small pools these toxins may aver fatal for the other fishes if it is repeatedly disturbed or if it passes away.

The humpback turretfish nourishes of seaweeds, sponges, molluscs, worms and crustaceans it ferrets out on the bottom.

The juveniles live in small schools, but the adults, apart the reproductive period, are usually solitary.

It is a hermaphrodite protogynous species: which means that at the beginning all the animals are females and then, while growing, may transform into males. There is a small chromatic sexual dimorphism: the males show, in fact, a dark band on the sides starting from the eye and going down diagonally. After the mating the eggs are entrusted to the currents.

Even if, at times, the juveniles are fished for the home aquaria, the species does not appear to be endangered by the human activities or by the climate changes. The populations can double in less than 15 months and the vulnerability index is very low: 16 per 100.