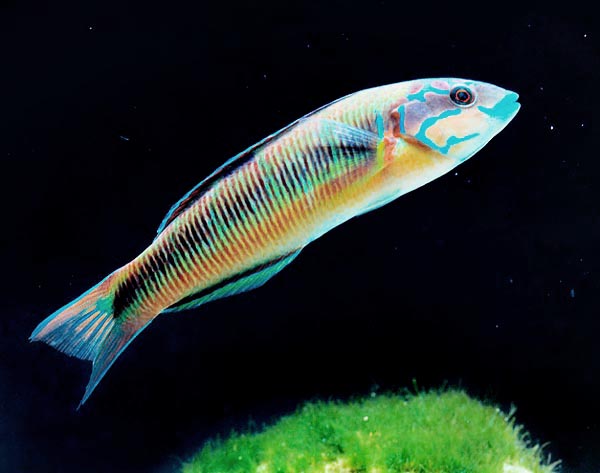 The Ornate wrasse (Thalassoma pavo Linnaeus, 1758) belongs to the class of Actinopterygii, the ray finned fishes, to the order of Perciformes and to the family of Labridae.

The name of the genus comes from the Greek “thalassa” = sea and “soma” = body; it is therefore an animal having the colour of the sea.

The Latin name of the species, “pavo” = peacock, emphasizes that it is a very beautiful fish.

It is present in the warmest zones of the Mediterranean, but, particularly, along the Atlantic coast from south of Portugal to Gulf of Guinea. It is found also in several not far away islands, such as the Canary Islands, the Acores, and Madeira.

Coastal species, we find it on the rocky seabed up to about 20 m of depth, but, in some zones, it has been sighted even at 100 m. 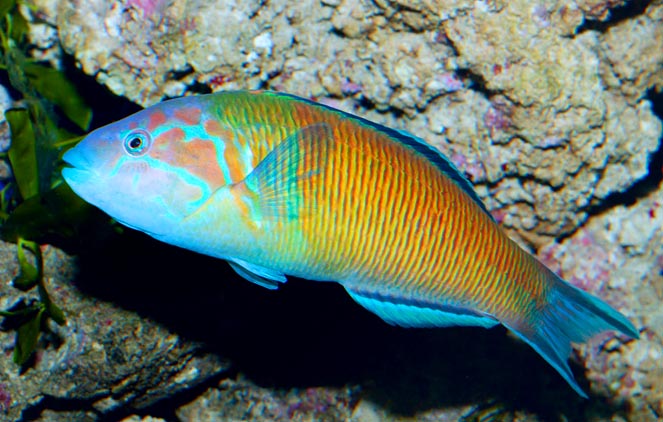 Depending on the colour, they were distinguishing three varieties:

– the Thalassoma pavo variety unimaculata Lowe, 1841, more frequent in the cold zones, with a dark dorsal spot, and darker, anyway, in the upper part of the body. Towards the belly, stands out some red on the green-blue vertical structure. The head does not have red zones, but violaceous.

– the Thalassoma pavo variety torquata Lowe, 1843, bigger and more frequent in the warm zones. The livery is spectacular with an often very bright contrast between the blue and the bright red of the head. Typical is a vertical blue band edged of red, which separates this zone from the rest of the body, tending to the green with red dots. Reinboth showed later that they were exclusively males.

– the Thalassoma pavo variety lineolata Lowe, 1841 which appears as the transition form between the two above.

Nowadays, we talk, like for Coris julis, of a hermaphroditic protogynous species. The females, while growing, should then become males and the temperature should stimulate the change of sex. 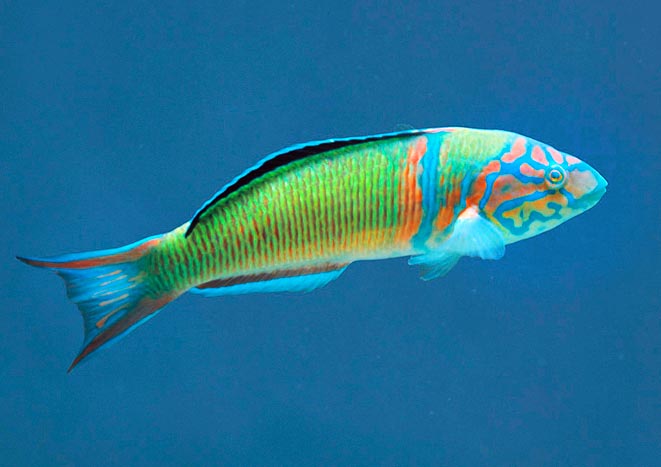 But the rule is not so rigid. It has been noted that some females do not change sex and that some males come to life already as such, with the torquata livery.

When is menaced, for sleeping or during the cold periods, it takes shelter under the sand.

It may be encountered solitary or in small crowds. The reproduction takes place in June-July, with pelagic eggs.

Much appreciated for the aquaria, it is easily caught with the pots, and when in pools of the right size, it adapts quite well to the life in captivity.