The species is native to central-eastern USA (Alabama, Arkansas, Georgia, Illinois, Louisiana, Mississippi, Missouri, Oklahoma, South Carolina and Texas) where it grows in swampy zones and at the margins of ponds and water streams.

The genus is honoured to the German physician and naturalist Johannes Thal (1542-1583), considered as the pioneer of botany in Germany; the name of the species is the Latin adjective “dealbatus, a, um” = whitewashed, with reference to the waxy patina covering the leaf. Common names: powdery thalia, hardy canna, mealy thalia, powdery alligator-flag, water canna (inglese).

The Thalia dealbata Fraser (1794) is a perennial rhizomatous herbaceous species, aquatic or semi-aquatic, acaulescent, evergreen or deciduous in the coldest climates, that quickly forms dense tufts. 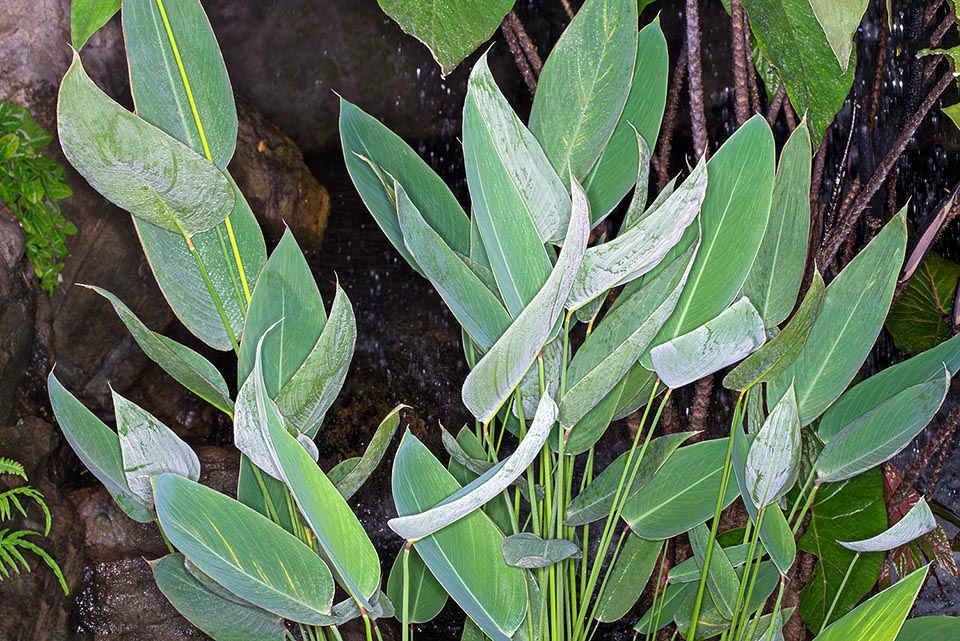 Rhizomatous or semi-aquatic of central-eastern USA, the Thalia dealbata is the only marantacea not cofined in the tropical and subtropical regions of the world © G. Mazza

The leaves, on 30-90 cm long petioles sheathing at the base to form a false stem, are alternate, distichous, simple, oblong-ovate to oblong-lanceolate with acuminate apex and entire margin, 20-55 cm long and 8-20 cm broad, of green colour and covered below by a wite-bluish waxy patina. Terminal inflorescences, on a 0,4-2,2 m long erect scape, ramified, 10-40 cm long, with short to elongated and arcuate ramifications with zigzagging internodes, 2-3 mm far each other, provided with a couple of almost circular bracts, concave, 0,8-1,5 cm long, of purple red colour and covered by whitish waxy patina, that subtend a couple of flowers. Bisexual flowers, self fecundating, about 1,6 cm long, of dark purple colour, with 3 sepals, 1-2 mm long, 3 petals merged at the base, 8-9 mm long, 2 partially united staminodes, one petaloid staminode longer than the petals, a fertile stamen and style with bilobed stigma. The fruit is a globose to ovoid capsule, 1-1,2 cm long, containing only one dark brown seed about 0,8 cm long. 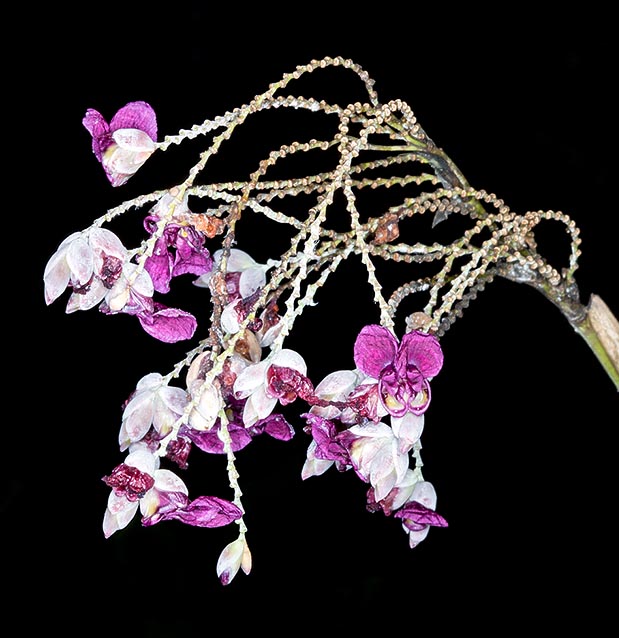 It usually and easily propagates by division in spring, utilizing 10-15 cm long portions of rhizome provided with various buds, less frequently by seed, previously submitted to cold stratification for three months, in organic loam maintained constantly humid at the temperature of 24-26 °C.

The species is the only one of the family of the Marantaceae native to North America and also the only one not confined in the tropical and subtropical regions, frequently utilized for its exotic look as ornament of pools and gardens in an ample variety of climates, from the tropical to the continental one, where the rhizomes can resist in winter if immersed in water in a depth sufficiently far from the overlying layer of ice, 45-50 cm or more. Of easy cultivation and fast growth, requires a position in full sun, or slightly shaded at the most, and sheltered from the wind.

The rhizomes can be placed directly on the bottom of the pool, if provided with an appropriate layer of soil rich of organic substance, preferably acidic to neutral, or in large containers, with the soil covered by a thin layer of rubble to avoid that the same is washed away, solution preferable in presence of small pools to limit and control the vigourous development, under a thickness of water from some centimetres up to 40-45 cm.

In the less favourable climates the cultivation in container allows also the sheltering in protected location in the winter months, permitting a more rapid vegetative regrowth in spring than the plants left outside. Besides in water, it can be cultivated also in full ground, in flowerbeds and borders, in deep soils maintained constantly humid, excluding the regions where the soil can freeze up to the depth of the implant, unless to extract the rhizomes in autumn and keep them in humid sand until spring in a cool location.

Thalia dealbata was last modified: May 5th, 2018 by Giuseppe Mazza