The Anigozanthos: the ” Kangaroo paws “

They come from Australia and for their hairy petals, with nail-looking seeds, they have been associated with kangaroos. Bulbaceous for cut-off flowers, of easy cultivation even in our climates. 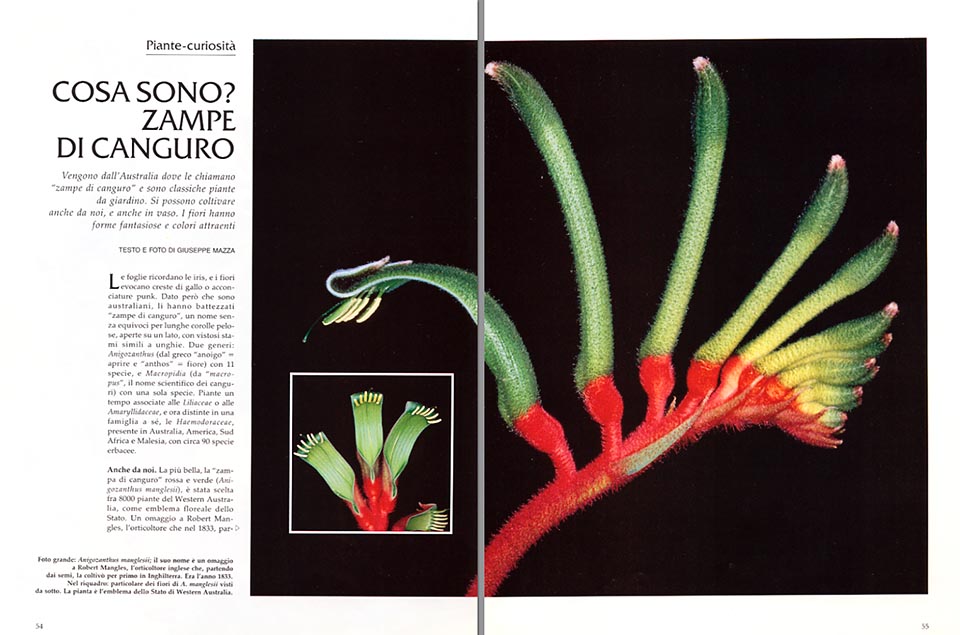 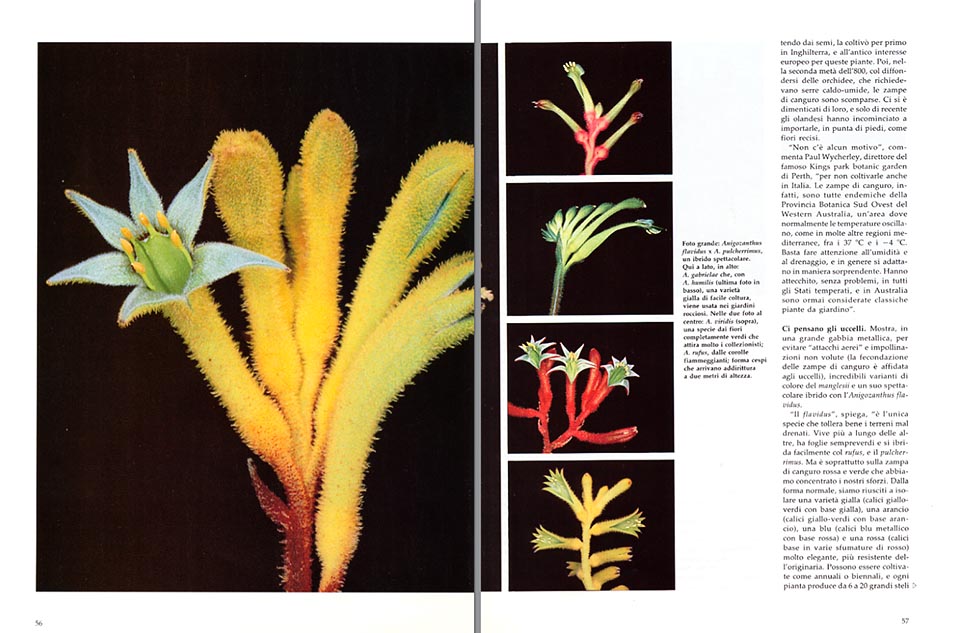 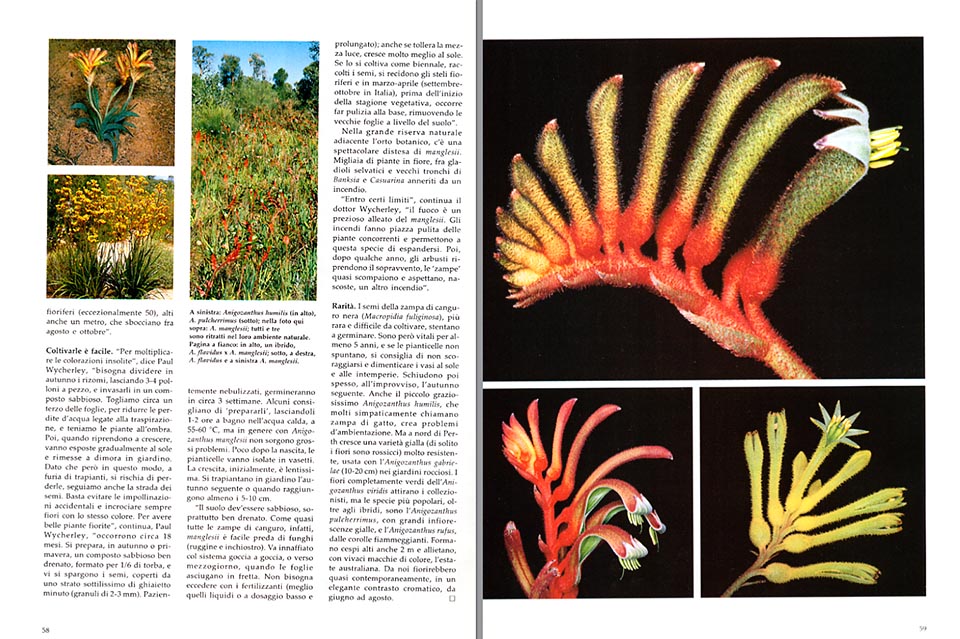 The leaves recall the iris, and the flowers evoke crests of cocks or Punk hairstyles.

Seen, however, that they grow up only in Australia, they have been christened “kangaroo paws”, a name without any misunderstanding, for their long hairy corollas, open on a side, with showy stamens resembling to nails.

Two genders: Anigozanthos (from Greek “anisos = not equal, and “anthos = flower), with 11 species, and Macropidia (from “macropus”, the scientific name of kangaroos), with only one species.

Plants once associated to the Liliaceae, or the Amaryllidaceae, and now differentiated in a proper family, the Haemodoraceae, present in Australia, America, South Africa and Malaysia, with about 90 herbaceous species.

The most beautiful, the Red and Green Kangaroo Paw, or Mangles Kangaroo Paw (Anigozanthos manglesii), has been chosen between 8.000 plants of Western Australia, as floral emblem of that state. A homage to Robert Mangles, the horticulturist who, in 1833, starting from the seeds, cultivated it for the first in England, and to the old European interest for these plants.

Then, by the second half of 1800, with the diffusion of orchids, which required warm-humid greenhouses, the kangaroo paws have disappeared.

They were forgotten and only recently the Dutch have begun to import them, on tip-toe, as cut-off flowers.

“There is no reason”, Dr. Paul Wycherley, director of the famous Kings Park Botanic Garden of Perth, comments, “for not cultivating them also in Italy.

The kangaroo paws, in fact, are endemic to the South West Botanical Province of Western Australia, an area where normally temperatures vary, as in many Mediterranean regions, between the 37 °C and the -4 °C.

It is sufficient to pay attention to the humidity and to the drainage, and usually they adapt themselves in a surprising manner.

They have taken rot, without any problem, in all temperate nations, and in Australia they are by now normal garden plants”.

He shows me, in a big metallic cage, to avoid “aerial attacks”, and unwanted pollinations (the fecundation of the kangaroo paws is committed to the birds), incredible variations of colours of the manglesii and a spectacular hybrid with the Anigozanthos flavidus.

“The flavidus, ” he explains to me, “is the only species which tolerates well soils not well drained.

It lives longer than the others, has evergreen leaves and hybridizes easily with the rufus, the pulcherrimus, and the manglesii.

But it is mainly on the Red and Green Kangaroo Paw that we have concentrated our efforts.

They can be cultivated as annual or biennial, and each plant produces from 6 to 20 large flowering stems (exceptionally, 50), high even one metre, which bloom between August and October.

To multiply the unusual colourings, we have to separate the rhizomes in autumn, leaving 3-4 shoots for piece, and put in a vase in sandy compound.

We take off about one third of the leaves, to reduce water losses due to the transpiration, and we keep the plants in the shade. Then, when they resume growing, they must be gradually exposed to the sun, and planted in the garden.

Seen that, however, in this way, by dint of transplants, we risk to lose them, we follow also the way of the seeds. It is sufficient to avoid the casual pollinations and cross-breed always flowers with the same colour”.

“But, then, who knows how much time will be needed?”, I interrupt him, thinking to the readers, obliged, if lucky, to start from the seeds.

“To get beautiful flowered plants”, he goes on, “we need about 18 months.

We prepare, in autumn or spring, a well drained sandy compound, composed of 1/6 of peat, and we spread there the seeds, covered by a dusting of small gravel (2-3 mm granules).

Nebulized patiently, they will germinate in about 3 weeks.

Somebody suggests to “prepare them”, leaving them 1-2 hours soaking in warm water, at 55-60 °C, but normally, with the Anigozanthos manglesii there are no major problems.

Shortly after the birth, the small plants must be isolated in small pots, and, initially, the growth is very slow.

They are transplanted in the garden the following autumn, or when they reach at least the 5-10 cm”.

“It must be sandy and, above all, well drained. As almost all the kangaroo paws, in fact, the manglesii is an easy prey of mushrooms (rust and ink).

It must be watered with the drop by drop system, or about noon time, when the leaves dry up quickly.

We have not to exceed with the fertilizers (better the liquid or the low and prolonged dosage ones), and even if it tolerates the mid-light, it grows much better under the sun.

If it is cultivated as biennial, once picked up the seeds, we have to cut the flowering stalks and in March-April (September-October in Italy), before the beginning of the vegetative season, we have to clean the base, removing the old leaves which lay on the soil”.

He shows me, then, in the huge natural reserve contiguous to the botanical garden, a spectacular extent of manglesii.

Thousands of plants in flower, between wild gladioli and old trunks of Banksia and Casuarina, blackened by a fire.

“In certain limits”, Dr. Wycherley continues, “the fire is a precious ally of the manglesii.

The fires make a clean sweep of competing plants and allow the expansion of this species.

Later on, after some years, the bushes have the upper hand, and the “paws” almost disappear and wait, hiding, for another fire”.

The seeds of the Black Kangaroo Paw (Macropidia fuliginosa), more uncommon and difficult to be cultivated, have difficulty in germinating.

They are however alive for at least 5 years, and if the small plants do not come out, we suggest not to be discouraged, and to forget the pots under the sun and the foul weather.

They often blow, suddenly, the next autumn.

But, north of Perth, a yellow variety (usually the flowers are reddish), grows up, much resistant, used with the Anigozanthos gabrielae (Dwarf Kangaroo Paw), 10-20 cm, in the rocky gardens.

They form tufts, high even 2 m, and enliven, with lively spots of colour, the Australian summer.

In our countries, they would blossom almost at the same time, in an elegant chromatic contrast, from June to August.

The Anigozanthos: the ” Kangaroo paws “ was last modified: May 22nd, 2019 by Giuseppe Mazza