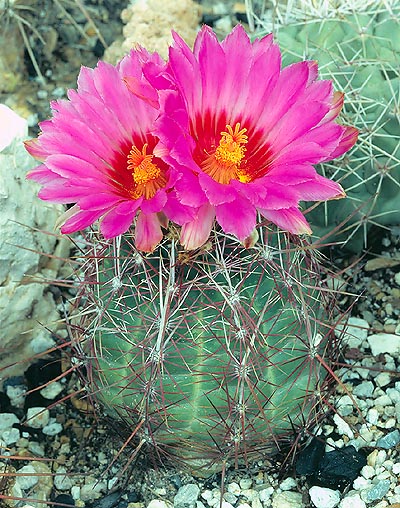 The plant is native to central-northern Mexico (states of Chihuahua, Coahuila, Durango, Nuevo Leon, San Luis Potosi, Tamaulipas and Zacateca) and to USA (Texas), where it grows in semi-arid zones (desert of Chihuahua), in association with thorny shrubs, on mainly stony and calcareous soils, between the 600 and the 2.000 m of altitude.

The Thelocactus bicolor (Galeotti) Britton & Rose (1922), very variable plant with a rather slow growth, has a single stem, rarely ramified at the base, of ovoid or cylindric ovate shape, of a colour going from the green to the green-grey or yellowish-green, 10-15 cm tall and with a diameter of 5 to 10 cm, even if old specimens, in the wild, may reach the 26-28 cm of height and 16 cm of diameter.

The 8-12 ribs are broad and slightly tuberculate, spirally placed especially in the oldest specimens, with downy circular areoles spaced of 0,8-2 cm. The areoles are equipped with 9 to 18 variously gradated red radial thorns, and yellowish apex, long up to about 3 cm, and 1 to 4 central, straight thorns, 3-5 cm long, of the same colour. The bell-shaped flowers originate at the apex of the more recent areoles, are long 5-6 cm, with ovary and floral tube covered by imbricate, thin and membranous scales with fimbriate margins, the outer tepals are of a pale pink colour with a greenish-pink central band, the inner ones are purple pink, more intense at the base, thus forming a well evident central dot. The fruits are oblong, 1-1,5 cm long and 0,5-1 cm of diameter, of green to brown red colour, and covered by fimbriate scales; the seeds are obovoid, about 2 mm long, of black colour.

It usually reproduces by seed, seen that it seldom ramifies. The vast area of origin, the presence at very varied altitudes and its own intrinsic variability, have originated many local forms which have been described, during the time, as varieties or subspecies, and are now considered by many botanists as synonyms, but on such thing there is not yet a full agreement.

Plant of easy cultivation, probably the most cultivated in the genus, much appreciated due to its multi-coloured thorns which almost cover its whole surface and the showy blooming. It must be placed in full sun, or, however, at the maximum possible luminosity, on particularly porous and draining soils which may be formed by common fertilized garden earth, coarse sand (or agri-perlite) and crushed dust-free stone in equal parts. Even if it stands, in dry soil and for a short time, temperatures as low as -7 °C, till -12 °C for some local forms, it is better not to expose it to temperatures lower than 0 °C, especially in presence of humidity; therefore, where the climate does not allow the cultivation in “desert” gardens, it is to be cultivated in pot, with the same aforementioned modalities, in order to shelter it in winter.

In summer, during the vegetative period, it is to be regularly watered, but allowing the soil to dry up completely before irrigating again; in winter it is to be kept dry at temperatures possibly between the +5 and the + 10 °C, this cold and dry period helps its blooming.

Thelocactus bicolor was last modified: May 9th, 2018 by Giuseppe Mazza