The plant is native to Mexico, where it grows in semi-arid areas, in association with thorny shrubs, on calcareous soils between the 1.200 and the 2.000 m of altitude. The are two recognized subspecies: the Thelocactus leucacanthus subsp. leucacanthus, native to the state of Hidalgo, with yellow flowers, and the Thelocactus leucacanthus subsp. schmollii, native to the state of Queretaro, with intense magenta flowers and tubercles usually greater than those of the previous one.

The Thelocactus leucacanthus (Zucc. ex Pfeiff.) Britton & Rose (1923) is a plant with pale green stems which, in the wild, forms wide compact tufts with even a diameter of one metre; the stems, globose or slightly elongated of 4-6 cm of diameter and 6-14 cm of length, have 7-13 ribs almost indistinct with conical tubercles, prominent, about 1 cm long and 1,4 cm broad, with rounded apex. 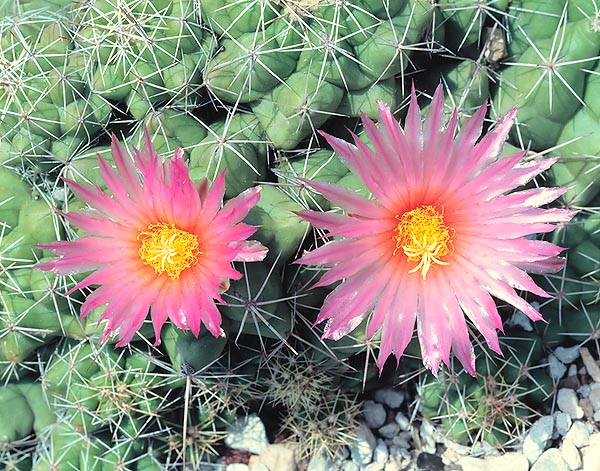 The flowers generate at the apex of the stem, are funnel-shaped, with ovary and floral tube covered by broad imbricate scales, 3-5 cm long and 4-5 cm broad, of yellow colour (subsp. leucacanthus), or from to magenta to crimson colour (subsp. schmollii), and open in the morning and close in the evening for some days. The fruits are globose, 0,5-1 cm of diameter, covered by scales, greenish-yellow and contain black pear-shaped seeds, long up to 2 mm. It reproduces by seed and by division.

Plant of easy cultivation to be positioned in full sun, or, however, at the maximum possible luminosity, on particularly porous and draining soils which may be formed for about the 50% by common fertilized garden earth and for the rest, in equal proportion, by sand (agri-perlite) and crushed dust-free stone. Though it is rather resistant to the low temperatures, as it can stand, completely dry and for short time, temperatures as low as -4/-6° C, it is better, in order to avoid rottenness, not to expose it to temperatures close to the 0° C.

Its best positioning in open air, where the climate allows this, is in “desert” gardens along with other xerophytes, elsewhere, it is to be cultivated in pot with the same aforementioned modalities. In summer, during the vegetative period, it is to be regularly watered, but allowing the mould to dry up completely before irrigating again; in winter, it is to be kept dry and with rather low temperatures, between +5 and +10° C, this resting time, cold and dry, is indispensable for a good blooming.

Thelocactus leucacanthus was last modified: May 9th, 2018 by Giuseppe Mazza