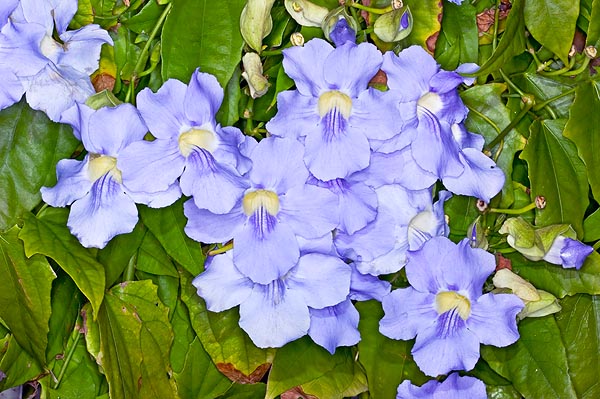 Strong climber. Naturalized in many tropical areas due to the beauty of its flowers © Giuseppe Mazza

The genus is honoured to the Swedish botanist Carl Peter Thunberg (1743-1828); the name of the species is the combination of the Latin words “grandis” = great and “flos,-oris”, flower, with obvious reference.

Vigorous evergreen vine with voluble stems which can reach and pass the 12 metres of length and lobate or ovate-hastate leaves, long up to about 16 cm and 10-12 cm broad. The inflorescences are pendulous, axillar or terminal, carrying funnel-shaped flowers formed by a 3-4 cm long tube, externally white, and a corolla with a diameter of 6-8 cm, composed of five blue-lavender petals, one of which is wider than the others, with a yellow throat. The fruits are globose capsules which end with a conical tip long about 3 cm, the seeds are flat and are thrown several metres far away at the opening of the capsule when ripe. It reproduces by seed, cutting and by fragments of the tuberous roots.

Very ornamental plant, due to the typical colour of the flowers and the luxuriant foliage, which has quickly expanded in all tropical and subtropical countries, acclimatizing in many areas thus becoming invasive due to its quick expansion, both by seed and by the rooting shoots which are produced even far away from the foot of the mother plant, so much to advise against its cultivation in some situations. It can be cultivated in warm-temperate climate zones, where at times it behaves as semi-deciduous, keeping in mind that the aerial part gets harmed with temperatures around the -3°C, whilst it can tolerate the -6/-7°C at root level. It can be placed both in full sun and in partial shade and is not particular to the soil.