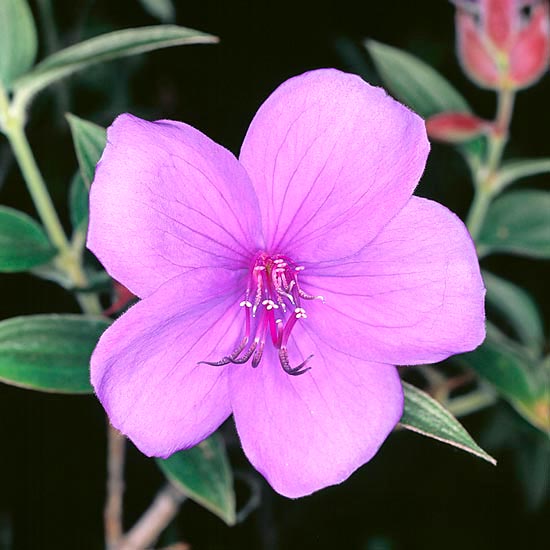 This species is native to Brazil (Minas Gerais, Rio de Janeiro and São Paulo), where it mainly grows on rocky outcrops at the borders of the forests or in the glades, in markedly seasonal climates.

The name of the genus comes from that used by the Guyana populations; the name of the species is the combination of the Latin prefix “semi” = half and of the Greek words “deka” = ten and “anér, andrós” = man, male, with reference to the ten stamina divided in two groups of five, of different shape.

The Tibouchina semidecandra (Mart. & Schrank ex DC.) Cogn. (1885) is a shrub which may even reach the three metres, with quadrangular section, hairy, branches.

The leaves are ovate, 5-10 cm long and 2-4 cm broad, with entire edge and sharp tip, grooved by three or five veins, of intense green colour on the upper page and covered by short rigid bristles, greyish below and thickly tomentose.

The flowers are terminal solitary, or, one terminal and two lateral, with five slightly unequal petals, obovate, 3-6 cm long, of a colour varying from the purple pink to the violaceous, and ten stamina where the lower five are longer and the upper ones shorter. The fruit is a globular capsule of about 1 cm of diameter, containing tiny seeds. It reproduces by seed and by semi-woody cutting in spring in a sandy substratum at the temperature of 20-22 °C.

Being cultivable in the tropical and subtropical climate zones in full sun or slight shade and sheltered from the wind, its cultivation may be tried in the mildest warm temperate zones as it can stand some degrees under the 0 °C for quite a short time, possibly with loss of the aerial part, which will grow again, anyway, in spring, from its base.

It requires soil rich of organic substance and perfectly draining, as it is much sensitive to water stagnations; prunings, if any, are to be done by late winter in order to keep compact the vegetation.

It is also cultivable in pot, using a substratum, as mentioned below, with addition of sand or agri-perlite, for improving the drainage, to be placed in winter in a place as luminous as possible and at temperature over the 12 °C; the upper layers of the soil are to be dried up before watering again, water must not be calcareous and must be at ambient temperature. The fertilizations, by means products for acidophilous plants, are to be carried on from spring to autumn, with the modalities shown by the producer, and suspended in winter.