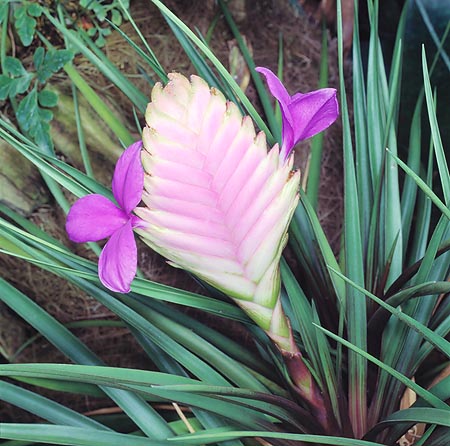 Very popular in the Tropics, but also indoor © Giuseppe Mazza

The Tillandsia cyanea Linden ex K.Koch (1867) is native to Ecuador and Peru, where it grows as epiphyte on the trees or on the rocks up to 1000 m of altitude.

The genus is honoured to the Swedish physician and botanist Elias Erici Til-Landz (1640-1693); the Latin name of the species, “cyanea” = deep blue, pale blue, refers to the colour of its flowers.

Evergreen herbaceous plant, monocarpic (bearing fruit only one time during its existence), acaulescent, epiphytic, with a rosette of several curved leaves, sharp, long up to about 30 cm and 5-15 mm broad, of a dark green colour with reddish striations at the base. At the centre of the rosette develops the floral scape, about 10 cm long, ending with an inflorescence about 15 cm long and about 6 cm broad, lance-shaped, formed by a flat spike of lavender-pink bracts strictly imbriacated and placed distichously from which rise large dark violet-blue flowers, with 3-4 cm long and 2-3 cm broad petals emitting a pleasant intense perfume; the flowers open in sequence for more than one month, whilst the bracts last longer.

It easily reproduces by vegetative way through the new plants coming out between the leaves from axillary gemmae. It is one of the most popular of the genus in the Tropics and sub-Tropics, thanks to its foliage and showy inflorescences, utilized as epiphytic on the trees, but also for covering the soil; its cultivation can be tried in the warm-temperate zones, in sheltered position as it bears for short time temperatures as low as -2/-3°C, provided not damp. It adapts to various light conditions, from full sun to partial shade, even if when in poor luminosity conditions the colour of the inflorescence tends to fade. In spite of being essentially epiphytic, it can be cultivated in pot with a draining substratum, very porous and aerated, made of peat and sand or other inert material (agri-perlite, vermiculite, compound for orchids, etc.), and as such it is utilized for indoor spaces decoration.

When in apartment, it needs humidity in the air and substratum, but this last must not be “wet”, and a diurnal temperature around 18-20°C, which by night can be reduced to 12-14°C. The best thing would be a habitat with a humidity of the 70-80%, or, as last resource, in case of dry air and high temperatures, to effect very thin, short lasting nebulisations, utilizing water at ambience temperature and not calcareous, in order not to cause un-estethic dots on the leaves, and this to be done in the morning, thus avoiding stagnations during the night hours; it is, as a matter of fact, subject to rottenness by water stagnating in the substratum and in the axil of the leaves.