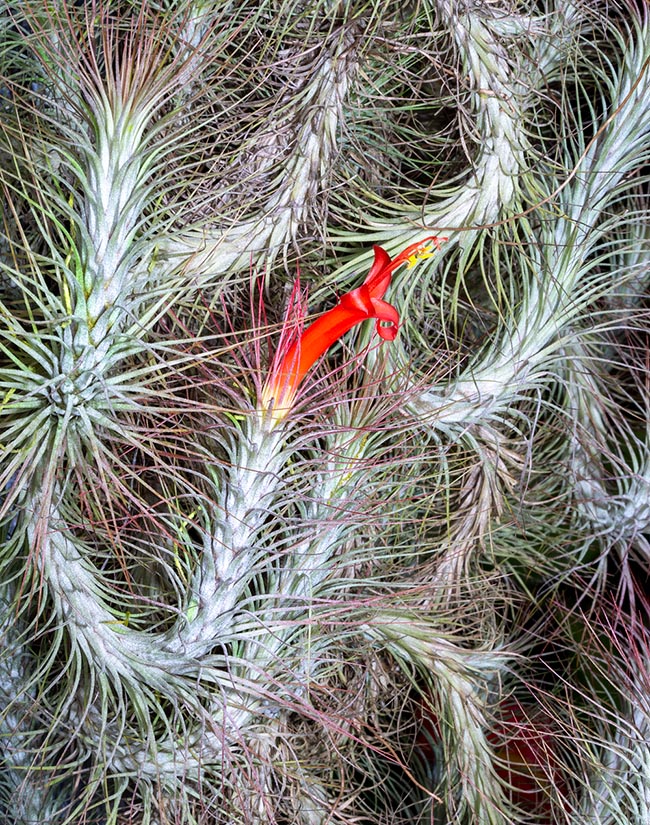 The species is native to north-western Venezuela, where it grows on the trees or on the dry rocks between the 400 and the 1500 m of altitude.

The genus is honoured to the Swedish physician and botanist Elias Erici Til-Landz (1640-1693), the species to the explorer naturalist Nicolas Funck (1816 – 1896), professor of natural history at the Superior School Athénée de Luxembourg.

The numerous leaves are spirally arranged, linear, thin, pointed, erect or bent laterally or upwards, of variable length, mostly long up to 2,5 cm and 2 mm broad towards the base, of grey silver colour and densely covered by tiny grey or brownish scales (trichomes).

The inflorescence is sessile with 1, rarely 2, flowers subtended by 0,7 cm long lanceolate bracts with acuminate apex; at the time of blooming the central leaves turn red.

The calyx has 3 ovate free sepals with obtuse apex, cartaceous, glabrous, 1,5 cm long, and the corolla with three 4,5-5 cm long, free, petals, of bright red or orange red colour with retracted apex. The stamens are 6, arranged in two series of 3, protruding the petals and the ovary is superior.

The flowers of T. funckiana are autosterile, are pollinated by hummingbirds and last several days.

The fruit is a capsule containing numerous tiny seeds provided at the extremity of a tuft of hair that facilitates their dispersion by means of the wind. After blooming the plant keeps living through the new plants emerging at the axil of the upper leaves and those produced, even before blooming, along the stem. 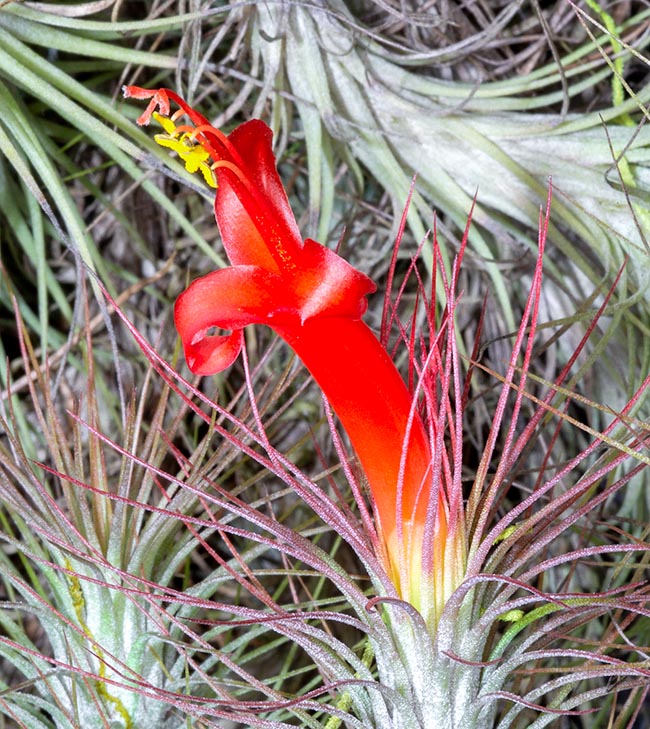 It distinguishes for the bright red or orange red colour of the flowers, rare in the genus Tillandsia, subtended by lanceolate bracts with sharp apex. When blooming the central leaves turn red © Giuseppe Mazza

It reproduces by seed, placed superficially on a porous and draining organic substratum maintained humid at the temperature of 24-26 °C, but usually and easily by division.

It is a species standing among the most ornamental ones that distinguishes for the red colour of the flowers, rare in the genus.

It can grow in open air in the tropical and subtropical zones and, marginally, in the temperate warm ones, in a sheltered position, where the temperatures of less than +5 °C are short-lasting exceptions.

Like in nature it can be put directly on the trees or shrubs or to be fixed on pieces of bark, branches, cork or other inert material and suspended on suitable supports. It requires full sun or slight shade and non-calcareous water, in absence of rain, 2 or 3 times per week in summer, less in winter in the morning, even if it can stand drought periods.

It can be cultivated also indoors in a very luminous position. It requires full sun of light shade in a very luminous position, such as a window facing south-east to south-west, and well aerated, in order to allow the plant to quickly dry up after waterings or nebulizations and to be perfectly dry by the evening, and without water stagnations at the axil of the leaves being easily subject to rottennesses.

Averagely, it requires high temperatures, with lowest night winter ones preferably over the 15 °C.

Fertilizations are to be done on a monthly basis, in spring-summer, with a water-soluble product balanced with microelements at 1/4 of the dosage indicated on the package.