The False gharial or False gavial or Tomistoma (Tomistoma schlegelii Muller, 1838), is a crocodile afferent to the order of Crocodiles (Crocodylia), family of Crocodylids (Crocodylidae) … some biologists talk of the family of the Gavialids (Gavialidae), but this subdivision is not yet accepted by all …. Subfamily …. And also here the debate is still going on, some biologists inserts it in that of the Gavalines (Gavialinae), others, on the contrary, in that of the Tomistomines (Tomistominae) … genus Tomistoma.

The lemma “tomistoma” means “sharp mouth”, this word comes from the fusion of the ancient Greek terms “tomos”, which means “sharp, acute” and “stoma” which means “mouth”. The term “schlegelii” stands for “of Schlegel”, from the family name of the German zoological biologist H. Schlegel (1804-1884), who appears to be its discoverer.

Even if the shape of its snout may be easily misleading, the biologists, as said before, show some doubts about the fact that this loricate is related to the Gharial (Gavialis gangeticus). On the basis of recent fossils, to which add various morphological evidences, it might quite well come from species afferent to the family of the Crocolydes (Crocodylidae). But recent haemato-immunological and biochemical data seem to be in disagreement with this last hypothesis, and therefore the doubt keeps in going on. The CITES places this species into the appendix I, the IUCN declares its status as “endangered”, that is, EN C1. They estimate a population of 2.500 units only. Essentially, the data about their biology of population are still quite scarce, they have a rather ample geographic distribution, but the nuclei are much depleted and severely menaced.

It is present in Indonesia, or, better, in that complicated and intricate system of islands forming the Malaysian archipelago, called Insulindia; more precisely, it is found in the islands of Java, Sumatra (which is the sixth island, as per size, of our planet), at Kalimantan, which after the geographers is nowadays the Indonesian part of the island of Borneo (that is, the ¾ of the island, whilst the non-Indonesian portion is formed by the Brunei and by the eastern Malaysia, whilst for the local populations it refers to the whole Borneo), the island of Sulawesi, which at the time of the English settlers was called island of Celebes and is placed between the island of Borneo and the island of the Moluccas, in Malaysia as well as in the Malaysian peninsula, also in Borneo, perhaps in Vietnam and till 1970 in Thailand, where it seems now to be extinct. 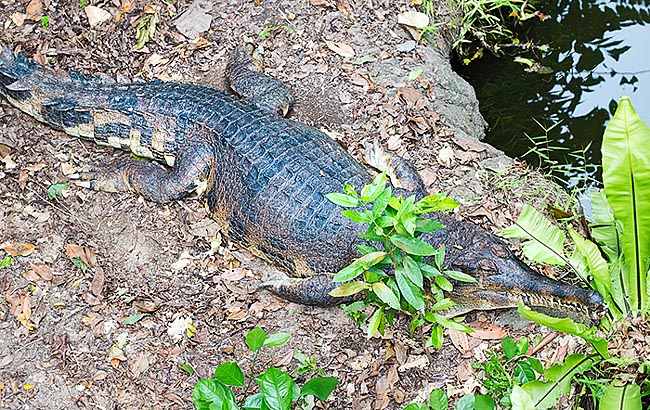 It also digs holes, where it withdraws with some water. It seems to prefer areas with an extensive vegetal coverage or the smooth flowing water streams. In reality, little is known about its ecology.

As just mentioned, the Tomistoma schlegelii is a still little known species, also because poorly studied.

The biologists have fairly scarce data about the biology of the population, also because of the quite fragmented distribution which characterizes this species.

The main dangers afflicting this loricate are not completely known.

The fishing by the local populations, by means of nets, creates two basic problems: on the one hand they may get caught into them and on the other side, their fish stocks get reduced.

The reproduction in captivity is done by proper zoological centres in Europe and in USA, whilst it’s missing in loco, where the most elementary suggestions for improving the natural one are completely ignored. The construction of dams, furthermore, destroys the biotopes where they live, with serious consequences for their survival. Presently, there are studies going on for verifying its distribution in Malaysia and Indonesia.

The longirostral shape of the snout suggests, as it is in the reality, an ichthyophagous alimentation, but, in all fairness, the Tomistoma schlegelii has a more generalized nutrition than that of the Gharial (Gavialis gangeticus). From the analysis of the gastric contents its has been noted, in gact, that it nourishes also of insects, crustaceans and micro-mammals, even if the biologists have observed that the larger individuals may also attack and eat the macaques.

It has a very narrow and long snout, practically almost identical to that of the gharial. The colouration is dark brown/chocolate, similar to that of the sub-adults, with a black band on the tail as well as on the body.
Black spots are present on the jaws.

It has fairly remarkable dimensions. It reaches the length of 5 metres, and, potentially, it may be even bigger. It has 76-84 teeth, of which 4-6 pre-maxillary; 15-16 maxillary and 19-20 mandibular.

The females reach the sexual maturity when 2,5-3 m long. The nests are 60 cm deep holes, dug in the sand and filled up with dry leaves and peat. 20-60 eggs are laid in layers. They are about 10 cm long, are of dirty white colour, and the incubation time is of about 90 days.

At the time of the hatching, the newborns do not get any form at all of parental care and their death rate is very high because of wild hogs and reptilians of various types.