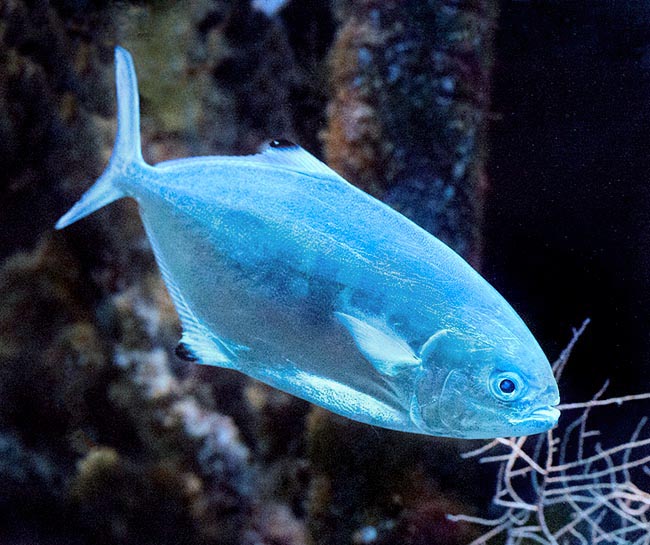 Pompano (Trachinotus ovatus) adult in the deep blue. It can reach the 70 cm © Giuseppe Mazza

The Pompano (Trachinotus ovatus Linnaeus, 1758), belongs to the class of Actinopterygii, the ray-finned fishes, to the order of Perciformes and to the family of Carangidae.

The pompano is present all over the Mediterranean, Black Sea included, where, however, its number is scarce, as is the case, anyway, of the eastern coasts from Egypt to Turkey. After Gibraltar Strait, we find it northwards, with a good density of population, up to England and in minor quantity in the Scandinavian countries and in Iceland. South of Gibraltar, it is present along Africa up to Angola, after having colonized the Azores, Madeira, Canary and Cape Verde Islands.

It is a pelagic species living offshore in more or less crowded schools migrating at times. But it never goes too far away from the coasts, keeping between the 50 and the 200 m of depth, where the light blue-grey basic colour, emphasized, protects it from the predators. It has been found also in the lagoons and in the estuaries, in brackish waters.

It can reach the 70 cm, but rarely exceeds, when fished, the 30-35 cm. The body, oval and much compressed on the sides, is covered by tiny scales, almost invisible. The head, perfectly integrated into the profile of the back, is short with a small and oblique mouth, slightly protractile. The jaws, the vomer, the palatines and even the tongue, are covered by small sharp teeth. The eye is of modest size.

There are two dorsal fins. The first, preceded by a spine bent towards the head, is practically formed only by 5-6 spines looking towards the tail. They have at their base a small membrane which allows them to be folded, while swimming, in a suitable lodging. 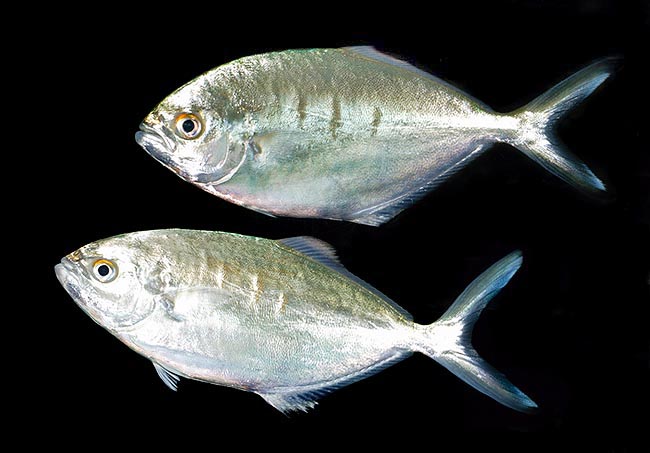 Two young in surface. Growth is very fast and they talk about farming © Giuseppe Mazza

The pompano is a gregarious species. It swims fast and hunts, in group, schools of pelagic fishes, such as the anchovies, and schools of molluscs, such as calamari and squids, not ignoring, however, the crustaceans.

It reproduces in summer with pelagic eggs which open ion a couple of days. Once the yolk is finished, starting from the fifth day the larvae nourish of plankton and grow up visibly. When 18 days old all the fins are already well evident and when 24 they already resemble a lot to the adults with silvery scales. These elements, along with the fact that the flesh is white, firm and tasty, have led to the creation of experimental farms, in USA and in China, with cages in open sea and alimentation based on granules composed, almost in equal parts, by fish meal and soybean meals.

Apart the convenience of the farms, the species is not, in any case, endangered by the fishing seen that the populations double in 1,4-4,4 years. The vulnerability index is of 39 over 100.