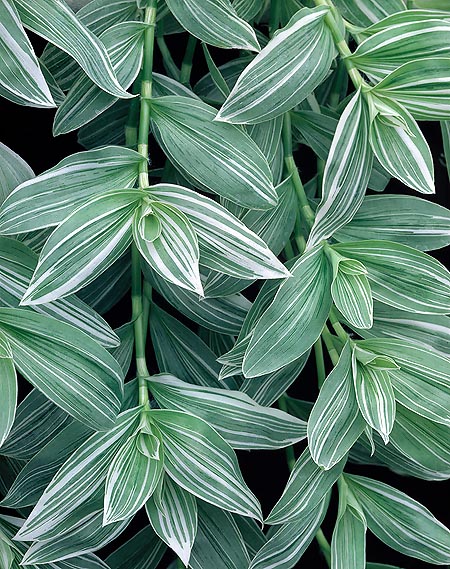 The plant is native to Argentina, Brazil and Uruguay, where it grows in the pluvial forests, often on the banks of the rivers.

The genus is honoured to the English botanist and gardener John Tradescant (c. 1570-1638); the name of the species comes from the Latin “flumen” = river, therefore, ‘of the river’, with reference to Rio de Janeiro area (in Latin “flumen Januarii” = January river), place where this plant was sighted and described for the first time.

The Tradescantia fluminensis Vell. (1825) is a perennial herbaceous plant with creeping and succulent stems, rooting at the nodes, spaced of 25-35 mm, with erect apices. It has simple alternate leaves of a glossy green colour on the upper side, often purple on the lower one if in full light; from lanceolate to ovate shape with sharpened apex and ciliate margins, 3-6 cm long and 2,5 cm broad. Some variegated forms do exist, one of the most diffused in cultivation being the ‘Variegata’ (see photo), with green leaves with irregular white stripes.

The flowers are united in inflorescences (cymes), usually terminal, axillary in some instances; the single flowers, on a 10-15 mm long peduncle, have three 5-7 mm long sepals with glandular hair (that is, equipped at the apex with a gland secreting an often viscous substance) on the central rib, three white, about 9 mm long, petals and six white filaments thickly surrounded by white hairs. The fruits are tripartite capsules containing black seeds.

It reproduces by seeds, but usually and quite easily, also by division and by cutting, utilizing portions of stem or 8-10 cm long terminal segments, even if often a small portion of stem with only one node is sufficient for rooting in a sandy substratum or even in water, where the plant can live for long time.

Particularly vigorous plant, fast growing and easy to cultivate, it is not much demanding about soil and can grow indifferently in the shade or in full sun, even if for the variegated forms a high luminosity is preferable for enhancing its colours. It is not much resistant to the low temperatures and stops vegetating already by 10, 12° C; gets damages just below 0° C and finally dies by around -4° C. It may be employed as ground cover in open air, where the climate allows so, or in greenhouses, but its most common utilization, especially for the variegated forms, is in hanging pots for indoor decoration, patios, balconies, etc. For a vigorous growth we may utilize a substratum formed by garden earth, leaf mould, or peat and sand in equal parts; in summer, during the vegetative period, it is to be regularly watered, even if it can stand dry periods, in which case the vegetation will stop, whilst in winter it is to be just kept humid at temperatures over the +12° C.

As previously said, it can be cultivated also in water. Pruning are to be effected periodically, both for renewing and for thickening, by cutting the stems at the level of the rim of the pot, or for removing parts with green leaves in the variegated forms. The cut stems have a moderate use in the floral decorations.

The contact with several parts of the plant may cause allergic reactions in particularly sensitive individuals; similar cases are also reported in dogs in situations where the plant is utilized as ground cover.

The favourable characteristics of this plant have however a negative feedback, as whilst in the places of origin the plant limits to form restricted thickets, elsewhere, by escaping from the cultivation, it acts as a powerful infester, forming with the time, large growths, at times even more than one metre thick, which suffocate the pre-existent herbaceous vegetation and hinder the renewal of the arboreal species. It rapidly expands when in luminous locations, even in full sun, less in the shady ones and its dispersion takes place also by means of fragments of stem carried by the wind or by animals, thanks to the facility of rooting in whatever soil, provided the same is humid.

→ To appreciate the biodiversity within the COMMELINACEAE family please click here.