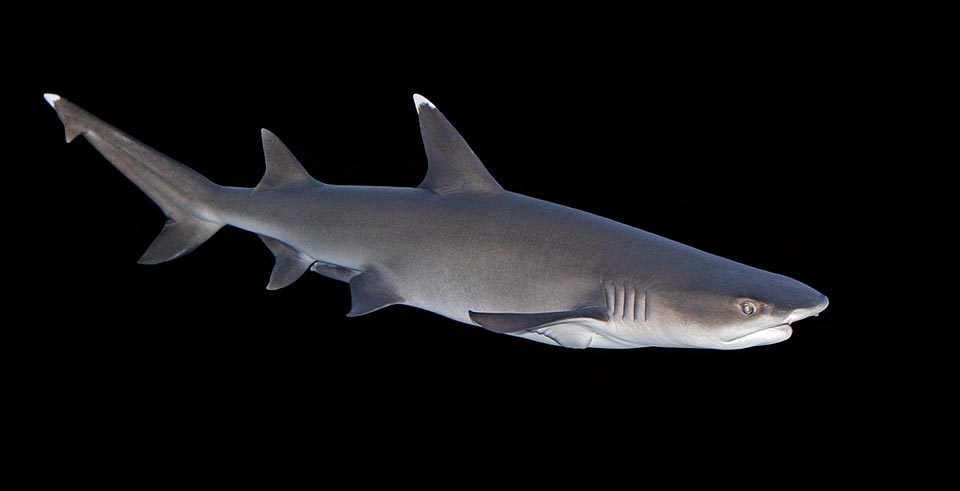 The Pigeye white shark of the reef (Triaenodon obesus) is active, mainly the night, among the corals of Red Sea and of Indo-Pacific, up to California and Costa Rica © Giuseppe Mazza

The etymology of the genus comes from the Greek “triaina” (tridente) and “odon” (tooth), hence “teeth with three cuspids”, whilst that of the species, obesus, from the Latin term rightly indicating obese, in clear contradiction with the look of this fish. Actually, in Rüppel’s intention, this term should have instead a contrary meaning, as utilizing the intensitive particle “ob” and adding “ésus”, past participle of “edere” (to eat, to consume), should rightly mean consumed, undernourished, anorexic to indicate in this way to the naturalistic world how this species is a “Twiggy” among the sharks. 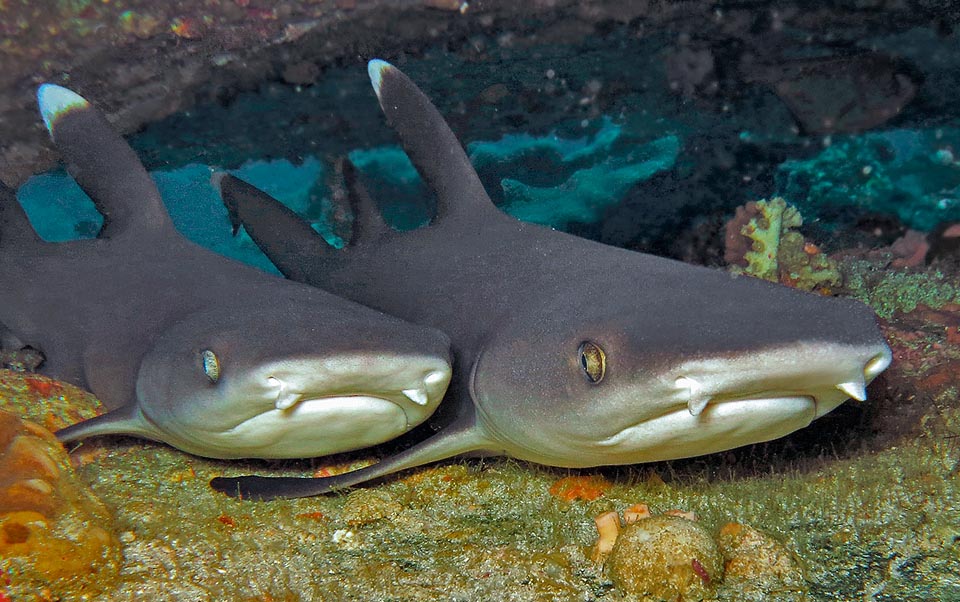 It spends most of the day on the bottom in small grottoes or sheltered by madrepores but also, between the formations, in sandy clearings © Sebastiano Guido

The Italian name of “squalo pinna bianca del reef” indicates that the tips of dorsal fins and of the tail end in a white small triangle, underlining in the mean time its diversity from the Oceanic whitetipshark ( Carcharhinus longimanus Poey, 1861), that has almost double dimensions and, unlikely the Triaenodon obesus, shy, often avers aggressive towards the man.

It is a shark of the warm waters, present along the coral reefs of Red Sea, of Indian and Pacific oceans, in Australia and Oceania reefs getting then, in the extreme east of the Pacific, to the Cocos and Galapagos islands to finally reach the American coasts from South California to Costa Rica. 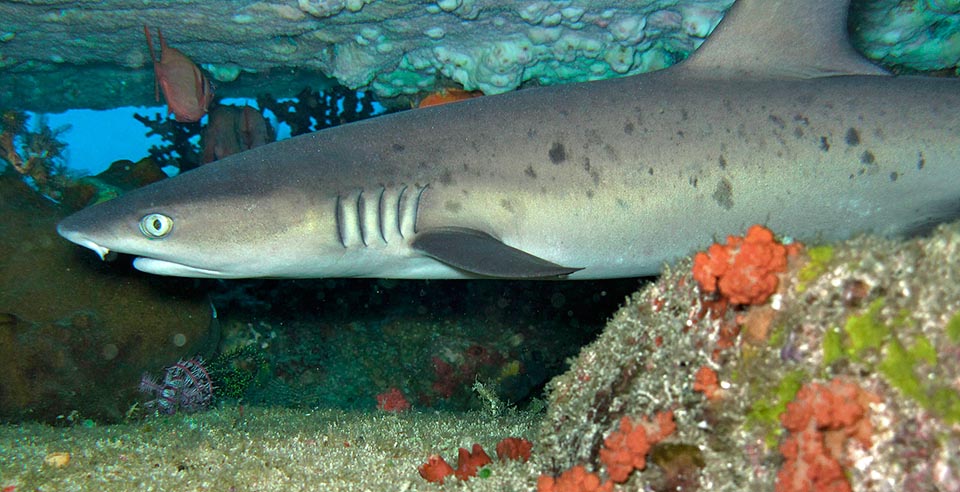 Quite slender, almost anorexic, can reach the length of 2 m and 24 kg, even if unusually just exceeds the metre and a half © Sebastiano Guido

The Triaenodon obesus lives in close contact with the reefs, where often during the day it may be found sheltered in small grottoes or under acroporas and ledges. Moreover, it is not rare to find it resting on sandy clearings that intersperse the barrier or in the passages that lead to the open seas. The preferred depths vary from 8 to 40 m, even if a specimen has been fished at about 300 m.

The maximum registered length is of 203 cm; whilst the average is of 160 cm. The maximum weight registered by Dr. John E. Randall is of 27,7 kg. Finally, a silhouette if compared with the majority of the sharks Carcharhinidae. The main characteristics, when met under water, are its slender shape, like a rather anorexic shark, with long upper fins ending in a small white triangle. 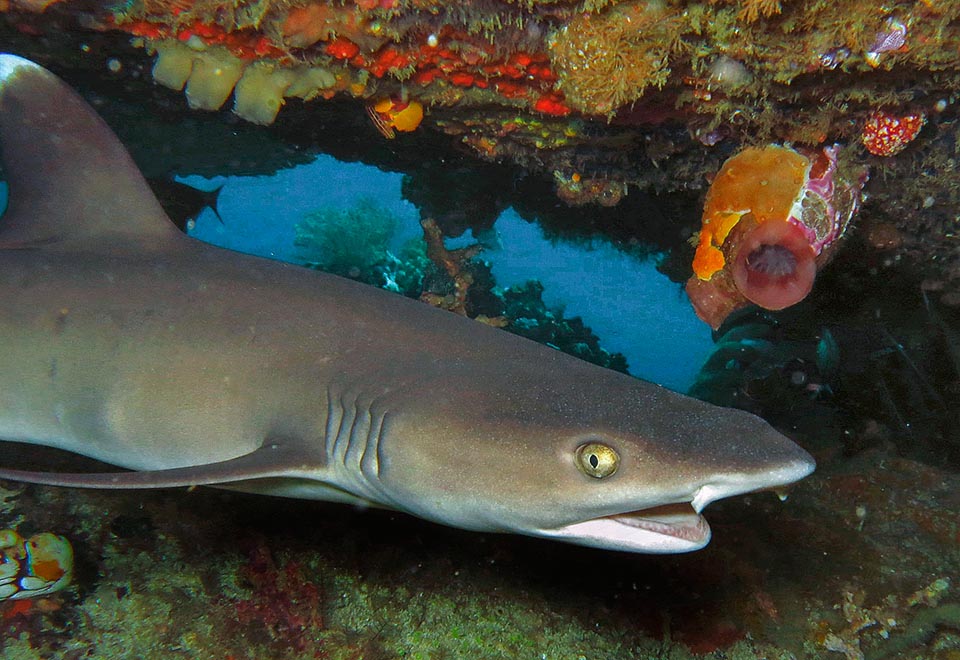 It mainly nourishes of fishes and in lesser extent of crustaceans and mollusks, usually swimming between 8 and 40 m of depth © Sebastiano Guido

The eye, should you have the possibility to observe it, seen that the fish is very shy and shuns close contacts with the divers, is clear and with a vertical pupil, placed at about half of the snout where stand out, well evident, the Schneider’s folds at the entrance of those holes, similar to nostrils, from where depart the receptors that allow every shark to advise even infinitesimal presences of blood in the water.

The mouth, proportioned to the size of the snout, has to rows of thin and sharp formed by a longer central cusped flanked at the sides by one or two small points. 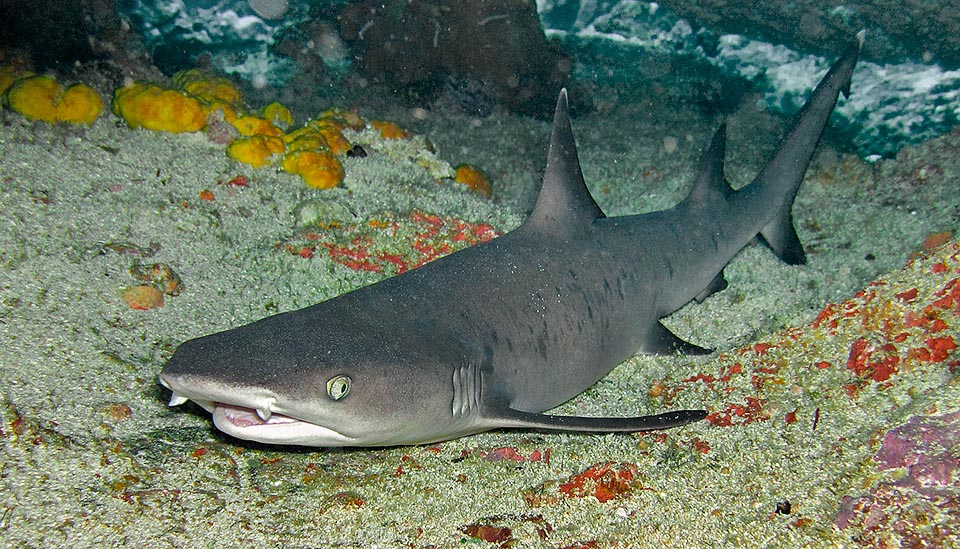 Here while resting in a grotto. We note the typical Schneider’s folds, a sort of small edge placed at the entrance of those that looklike nostrils and actually allow the sharks to detect the presence of bleeding preys. For finding them is sufficient 1 part of blood in 100.000.000 parts of water © Sebastiano Guido

Like all sharks, in position slightly retracted in respect to the first dorsal fin, protrude from the abdomen the pelvic fins that in the males are prolonged by the pterygoids charged of the fecundation of the partners. The tail is heterocercal, with long upper lobe.

Usually shy and harmless, it could attack if cornered or if prevented from escaping from a cavity where hidden. When met in open waters it always tends to avoid the divers that can more easily see it only doing apnea without going towards it, leaving it to approach. With a pinch of luck, we may meet many specimens united together resting or wandering indolently close to the bottom, perhaps grouped on the place by the pheromones of some female.

It nourishes mainly of fish and, to a lesser extent, of crustaceans and mollusks it hunts mainly during the night hours.

Typical the white triangles on the tip of the first dorsal fin anf of the tail. A small shark shy and harmless that escapes man with a very high vulnerability index © G Mazza

The copulation happens very quickly and in contact with the bottom as the male, having to hold with the teeth the pectoral fin of the female, cannot breathe. The gestation leads to the birth of a maximum of 6 newborns (usually 2 or 3) and lasts for about 10-13 months. The young, when just born vary from fifty to sixty centimetres and reach the maturity after at least 8 years of life. It has reported a case of asexual reproduction in a Hungarian aquarium.

The population is in sharp decline due to the fishing, especially that practiced with the dynamite in several zones of the area where it lives. The resilience of the species is quite low and the time of redoubling the population may exceed the 14 years. The vulnerability index is very high, 83 (2017) on a scale of 100.