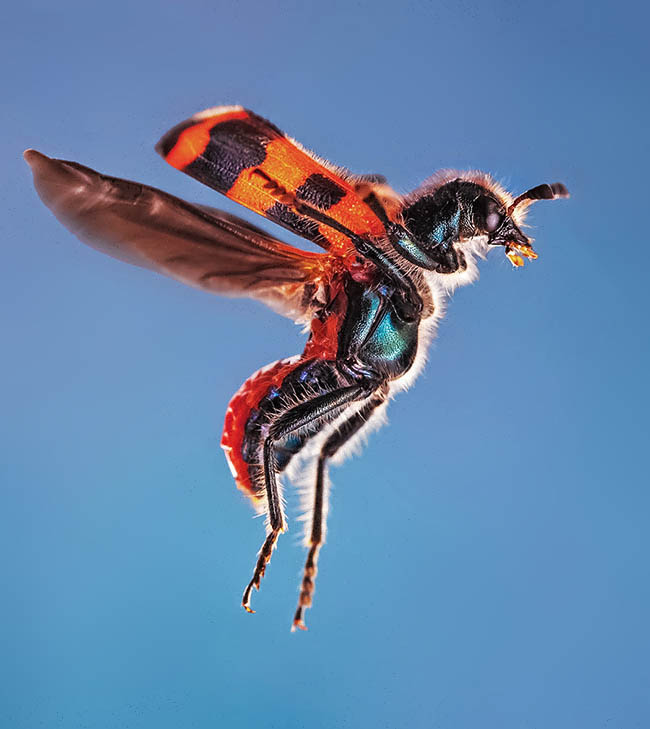 Excellent flyer, due to the ample hind wings, folded and protected when resting under the elytra, Trichodes apiarius can do long flights looking for flowers and nests of solitary or social Bees where the fertile females lay their eggs © Hubert Polacek

The generic name Trichodes comes from the Greek “τριχώδης” (trichó̱dies), like a hair, hairy, with allusion to the numerous hairs or trichi, present on the body of the adults, whilst the specific name apiarius, of the bees in Latin, refers to the occasional presence of the larvae in the hives.

Initially, Aristotle indicated these larvae with the name “κλήρος” (clero), with reference to the harvest mites, term later on assigned to the genus Clerus and extended to the family Cleridae.

This group of Coleopterans includes about 3500 species of small size having a varied diet.

The adults have a brightly coloured tegument, are floricultural or necrophagous carnivorous.

The larvae have long bodies covered by hairs, equipped with six legs. Those of many species are predators or feed on carrion

The Bee-eating beetle is present in many European countries, from the Iberian Peninsula up to Russia, as well as in Asia, North Africa and North America, in the sited where grow their numerous host plants and are present the nests of solitary hymenopterans of the genera Osmia and Megachile or hives of melliferous bees (Apis mellifera and Apis cerana).

The first adults appear in open air in spring on numerous plants especially in the months of May and of June. 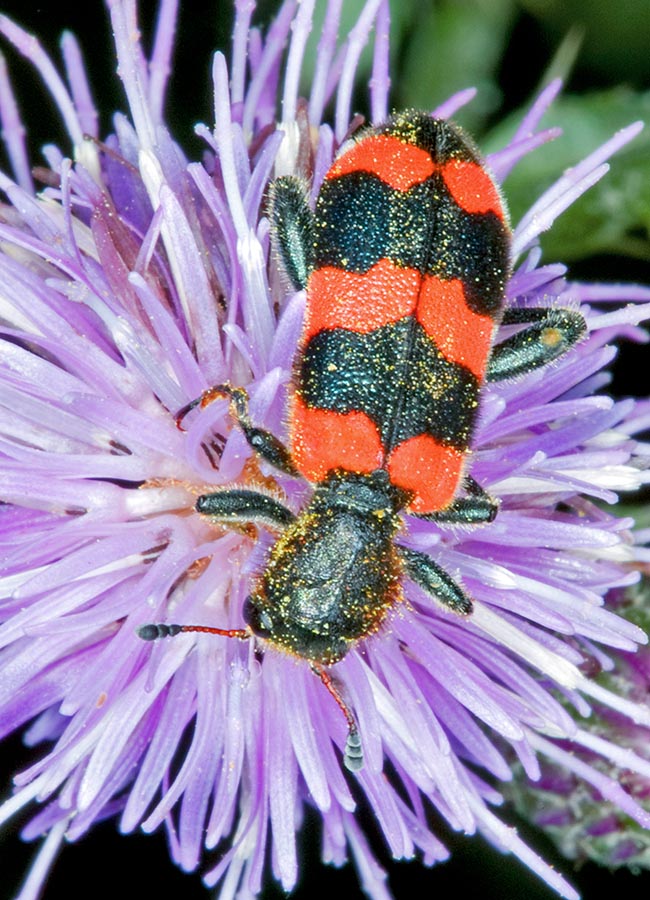 They are floricultural and feed on pollen and of nectar, in the meantime they ensure an efficient pollination service, as many pollen grains get caught in the hairs of the tegument.

But, equipped with solid mandibles, they are also active predators of small insects, especially Thrips and Coleopterans.

The body of the adults has a length varying from 9 to 16 mm and is covered by a thick down.

The head, with large compound eyes, is black with shiny bluish reflections.

The antennae are of the clavate type with the last articles enlarged.

The mouthpart is of the masticatory type with falciform mandibles suitable for lacerating the tissues of the preys.

On the inner side is present a row of thick hairs that serve to collect and ingest the pollen grains.

The first segment of the thorax (prothorax) and the legs are of black colour with bluish reflections like the triangular scutellum, placed between the two elytra of elongated shape that cover completely the abdomen.

These are of red colour with black bands.

From their shape and extension, especially of the apical band, is possible to discriminate the species of the congener Trichodes alvearus that has similar behaviour, but in which the black band does not reach the apex of the elytron.

The hind wings, of brownish colour with an ample surface that allows the insect to perform long flights, have a membranous consistency. They folded and hidden when resting under robust elytra that also protect the bright red abdomen, with tegument less consistent than the head and the thorax. 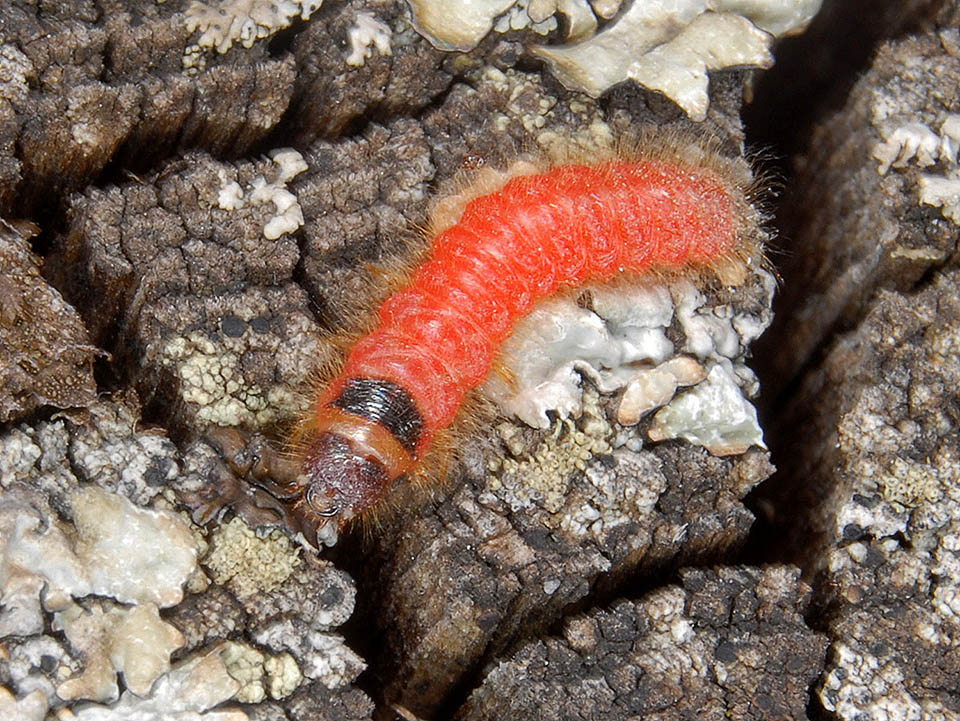 A larva surprised by the worker bees who, while inspecting and cleaning the cells, have chased it out the nest. Usually, in fact, it is not on the soil, well hidden in the hive © Ettore Balocchi

Between May and July, the young adults get out from the nests of the Apoidea where they have completed their post embryonal development to explore the surrounding territory looking for flowers, preys and any females. During the reproductive period, these are attracted by the odours coming from the nests of Apoidea and after mating they get in to lay the eggs. 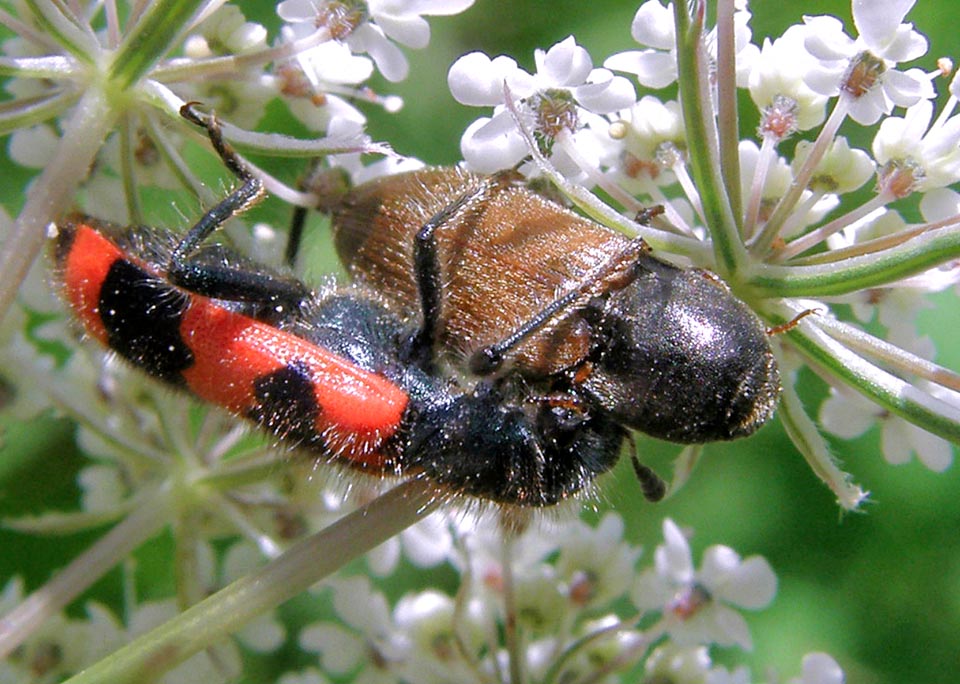 The flowers visited by adults attract many insects who are attacked while feeding. Scoliidae coleopterans stand among the preys preferred by the Trichodes apiarius © Natalija Pišec

The larvae, that come to life a few days after the incubation, complete the development feeding on larvae and pupae of their victims, present in the cells of the nest. They plunder the stocks of honey and pollen, but the bees are certainly not watching and often are able to kill them or to throw them out from the hive.

At the end of winter they transform into pupae, and, after completing the metamorphosis, the adults flicker in the spring of the subsequent year. 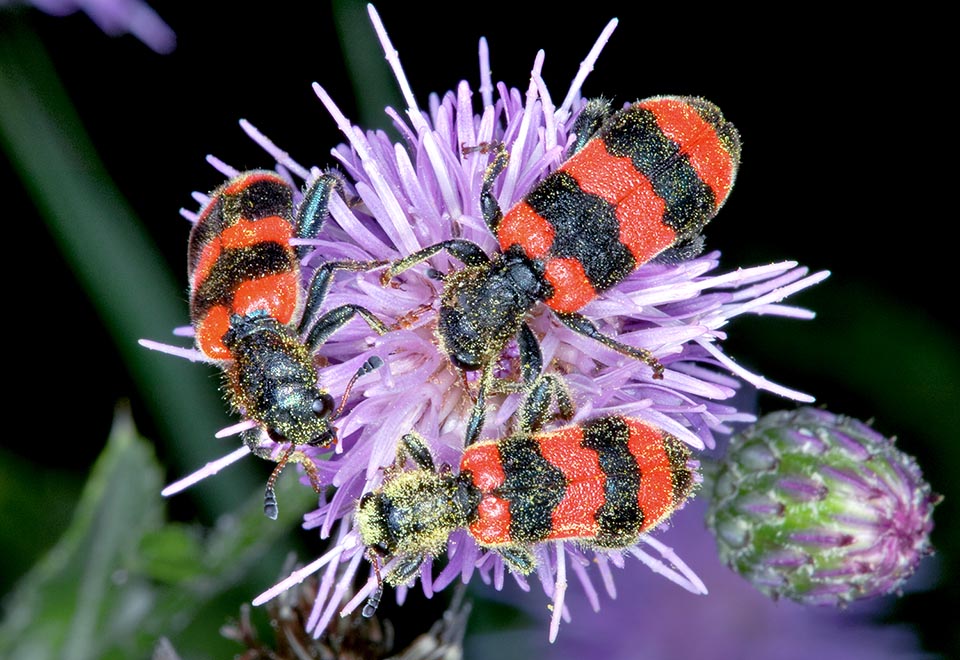 When the blooms are scarce it is not rare to find more individuals often concentrated on the same flower. The numerous and long hairs present on their body hold the pollen grains that will then be moved on other plants thus ensuring the crossed pollination of numerous spontaneous and cultivated species © Giuseppe Mazza