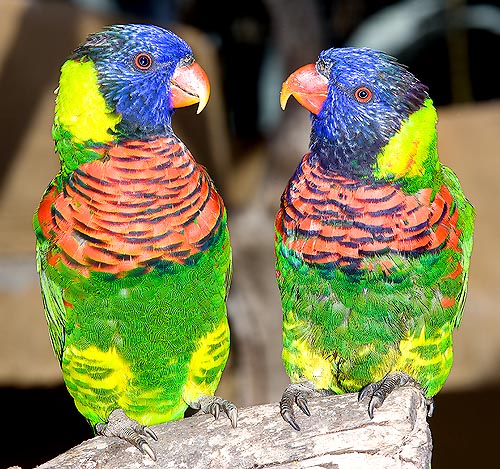 The Rainbow Lorikeet, also called by some authors Rainbow Lory (Trichoglossus haematodus Linnaeus, 1771), even if it is a lorikeet and not a lori, is a species of the genus Trichoglossus, endemic to the Australasian and Indo-Pacific regions.

More specifically, the species of the genus Trichoglossus, have originated (therefore also the Trichoglossus haematodus), in Australia, Tasmania, eastern Indonesia, Papua New Guinea and New Caledonia. They are found also in the Pacific islands such as the Vanuatu, under French rule.

Most of the lorikeets belonging to this genus are of medium size with rather long tails, whilst others are much smaller, with, proportionally, much shorter tails.

Usually, they form very crowded and noisy colonies, even if their vocalism is less annoying than other small Psittacidae of equivalent sizes, which live in colonies, especially in South America.

They are birds which, especially in the Pacific Ocean islands are utilized for ornamental purposes in the houses in the cities, whilst in the case of tribal populations still living in villages, in the internal areas of the tropical forests or in the hills, still virgin in good part, they are worshipped because carriers of good wishes.

For this reason, the populations of Papua New Guinea, as well as those of New Caledonia, respect it very much and it is not so rare to sight it inside some of their rural villages, for protecting the place, as it seems, thanks to its particular powers; obviously the whole has a purely ethno-zoological value.

Native and autochthonous to Australia, in particular the south-eastern part (more precisely, its relevant coasts from Queensland up to the southern coasts), to Tasmania (more precisely, the north-western part), to south-eastern Indonesia and to several islands of the Pacific Ocean, the so called islands of the Southern Seas: New Caledonia, Marquesas Islands, Papua New Guinea, Solomon Islands and Vanuatu. They are also present in New Zealand in the centre of Auckland, where, however, they are considered as pests for the cultivation of the fruit plants and cereals. 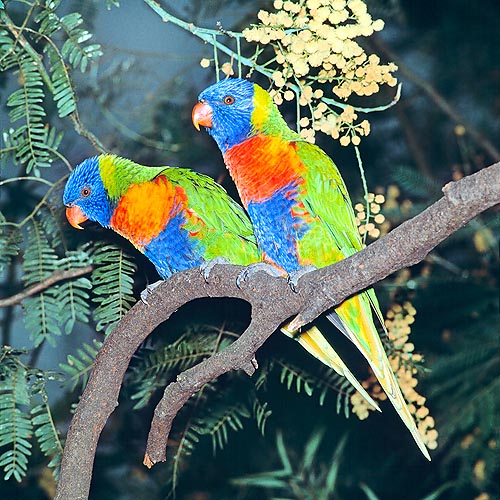 There are 21-25 races with remarkable chromatic variability © Giuseppe Mazza

They prefer the tropical rain forests, where, thanks to the zygodactylous foot they are suitable for an arboreal life. They are, however, much clever also for walking, on the ground and this has permitted them to colonize also the bush Mediterranean coastal thicket areas, especially in Australia, where it is not rare to meet them also along beaches, not far from the marine woods, nourishing, on the soil, of fruit berries. In the pluvial arboreal habitat as well as in the bush and in the marine wood, they tend always to associate in quite numerous communities of conspecifics of both sexes. They do the same thing when they are devastating fields cultivated with cereals, for instance in New Zealand.

Somatic differences, caused by some phenomena of geographic boundaries have determined a fragmentation of the species Trichoglossus haematodus, in several subspecies. To date, the taxonomy proposed by the International Commissin for Zoological Nomenclature (ICZN), is continuously evolving for this species of Psittacidae and often a new subspecies is proposed or an old one is cancelled; in some cases, however, also new or old species of the genus Trichoglossus, get the same destiny or rearrangement.

By sure, the improvement of some techniques of analysis at the service of the taxonomical biology, such as the assay and the biochemical analysis of the haematic proteins and of the albumen, along with the old techniques utilized by the biologists, like the analysis of the plumage, of the skeleton and the comparative anatomical data have an evident weight in the rearrangement of the classification of these birds. 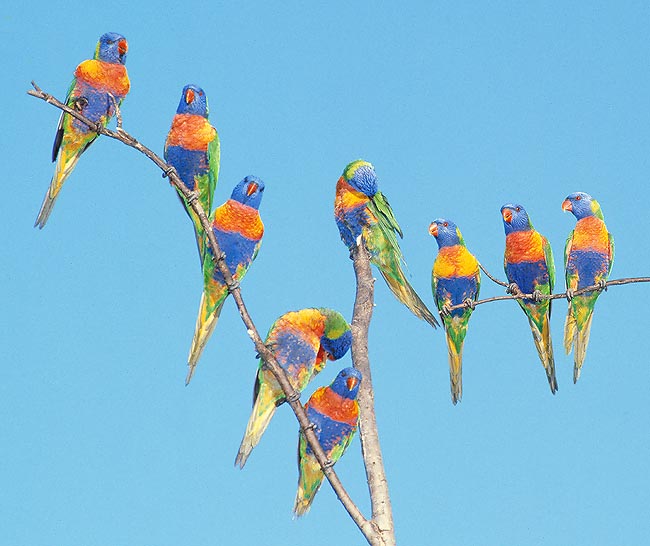 Specifically, the Rainbow Lorikeet (Trichoglossus haematodus), as the name implies, in both sexes (absence of somatic sexual dimorphism, both transitional-seasonal and stable), has a very coloured livery with wide striae or bands (this applies also for other species of Trichoglossus), the beak is orange, the head is generally bright blue, followed by a wide transversal bright green band or stripe, which covers the neck and also part of the back, alternated on the same by a bright orange band, followed by another bright blue band, the legs are orange-yellow, the belly orange and the tail, like the wings (primary coverts, secondary and remiges) are green.

The tail, as said, is usually bright green in the rectrices, long and sharp, spearhead-shaped.

The members of both sexes of Trichoglossus haematodus, may reach the length of 23-25 cm, with a 10 cm long tail in the adults. They are, as most of lori and lorikeets, nectarivorous and frugivorous.

The presence of digitiform and papillose expansions on the tongue, determines a so-called “brush” structure which allows it to draw nectar and pollen from the extremely numerous species of flowers forming the flora of the biotopes of those geographic zones.

In reality, besides of nectar and fruits, they nourish also of leafy vegetables, but they are also greedy of soaked canary and sunflower seeds.

In captivity, therefore, is a good thing to provide a variegated diet, following this type of alimentary ecology. During the growth and the weaning of the pullets, the quantities of food must be increased as the requirement of protein requirement is bigger; other species, like the Iris (Trichoglossus iris), needs a diet formed for the 50% by seeds as it cannot nourish only of nectar and pollen.

In general terms, the members of the genus Trichoglossus, Trichoglossus reproduce well both in the wild and in captivity, so that the Birdlife Association and the IUCN do not consider them close to extinction, or even as endangered species. 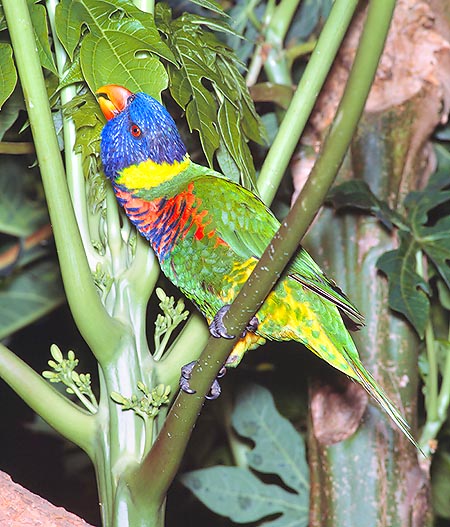 They bring good luck but may cause lot of damages to the orchards © G. Mazza

On the contrary, the populations are somewhat consistent, and for this reason the CITES does not limit their trade.

Furthermore, in some areas they are considered as noxious to agriculture, as said before in New Zealand (where they have been accidentally introduced from Australia), in the centre of Auckland.

In general, the Trichoglossus haematodus, reproduces between September-December in Australia, therefore during the austral spring, the reproductive periods are little different in the other geographic areas, where the rainbow lorikeet is present, and for the other species of the genus Trichoglossus.

The male builds the nest in the hollow of a tree; in Australia, for instance, inside a Eucalyptus.

The different species of Trichoglossus, lay usually one or two eggs per brood, but in one year they may be able to raise even 10 young, both in artificial habitat and in the wild.

In particular, the Trichoglossus haematodus is one of the most prolific species of the genus with even 5 eggs.

The female takes care of the eggs, the male cares the construction of the nest its defence and the nutrition of the partner and of the newly born pullets.

Also the Trichoglossus enteles, called Perfect Lorikeet, is quite prolific, as it lays even 3-4 eggs at the time.