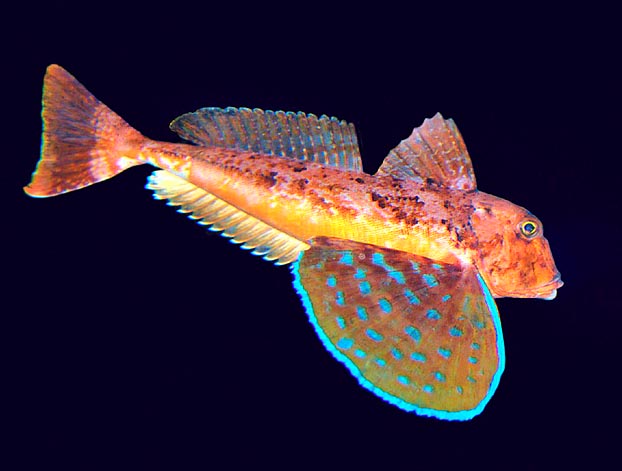 When Trigloporus lastoviza pectoral fins open as a fan, we may say it flies © Giuseppe Mazza

The Streaked gurnard (Trigloporus lastoviza Bonnaterre, 1788) belongs to the class of Actinopterygii, the ray-finned fishes, to the order of Scorpaeniformes and to the family of Triglidae.

The name of the genus, which counts only this species, comes from the Greek “trigla” = red mullet, to which its colour resembles, and “poros” = hole, opening, of more difficult interpretation. It perhaps refers to the nasal openings, the fore one is a small hole in the third front part of the snout, whilst the rear one is an unusual openings over it.

The name of the species is the common name with which it was called in Split.

Present in all the Mediterranean, Black Sea included, after the Gibraltar Strait the streaked gurnard goes northwards along the eastern Atlantic coast up to Scandinavia. Southwards, after having colonized the Azores, Canary, Madeira and Cape Verde Islands, it passes the Cape of Good Hope venturing along Indian Ocean African coast.

It is a benthic species living between the 10 and the 150 m of depth, even if, usually, it settles on the continental shelves between the 80 and the 100 m. It prefers the gravelly and muddy bottoms, but it is found also over the rocky ones and, in summer, it gets often closer up to the Posidonias (Posidonia oceanica) grasslands. 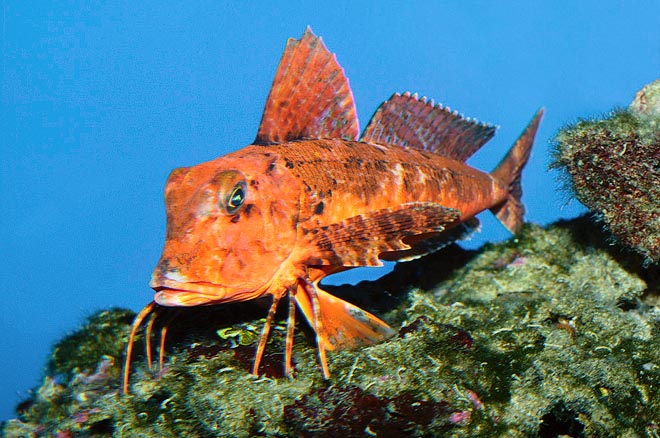 The most outstanding characteristics, which separates this fish from the similar genus Trigla, stands in the fact that the scales of the lateral line are showy, with spines bent towards the tails, whilst the pre-orbital bone is smooth, without spines, and does not have, under the eyes, a bony keel. But the spines on the operculum, the shoulder and the eyes are present.

The relatively short head falls on the sides on the vertical, whilst the body has an almost circular section, decreasing towards the tail, with oblique lateral striae and the belly without scales.

The mouth, horizontal and modest, has small teeth on the jaw and on the vomer.

There are two dorsal fins, pliable in a groove. The first one, high and triangular, counts 9-11 spiny rays. The second one has 16-17 soft rays. Both are armed at the base, on both sides, with 25 spiny shells. 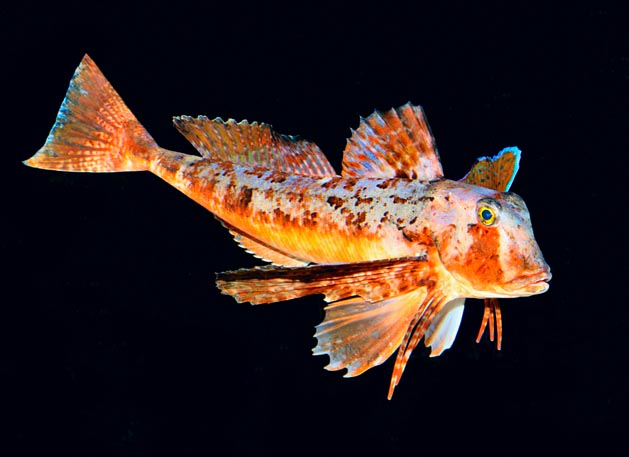 In fact, on the red colour of the background appear several light blue, lined up, spots terminating in an edge of same colour and of a rare beauty. The upper part of the fish and the head are carmine red, with patterns interesting also the fins, whilst the lower part and the belly are clear.

The Trigloporus lastoviza is a usually gregarious species nourishing almost solely of the crustaceans it finds on the bottom, in particular of crabs of genera Macropipus and Porcellana.

The reproduction takes place offshore, in summer, with small pelagic eggs. Little is known about the larval and post larval stages, but the reproductive cycle is known as to be very rapid. Under best conditions, in fact, are sufficient 1,4 to 4,4 years for doubling the members of a population. The vulnerability index of this species is of 32 over 100. The lifespan of a streaked gurnard is of 12 years.