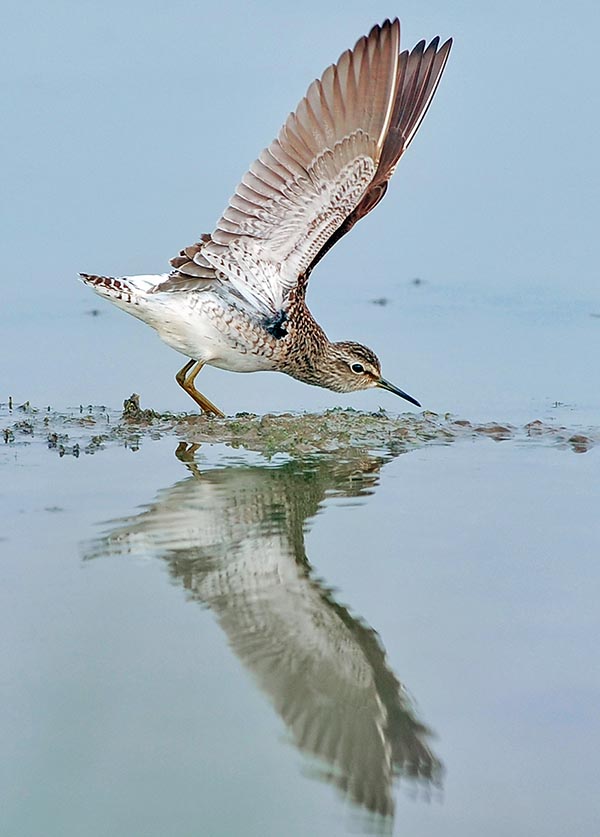 The Wood sandpiper (Tringa glareola Linnaeus, 1758) is a small wader belonging to the order of the Charadriiformes and to the family of the Scolopacidae.

Taxonomically, it is located into the genus Tringa, a group presently including 13 species but that in the next future might increase its number seen that the new technologies through the study of the DNA are rapidly modifying the classification of many categories with continuous changes.

The wood sandpiper is one of the smallest species of the genus and together with the Solitary sandpiper (Tringa solitaria) and the Green sandpiper (Tringa ochropus) share also many morphological characteristics, as very similar each other, as well as a good part of the territory.

The Italian name piro piro is onomatopoeic and approximately reflects the cry they emit when they take off alarmed whilst the name boschereccio indicates only the place where it nidifies because these birds usually frequent open areas and swampy oxbows.

The scientific term Tringa has an old etymology dating back to Aristotle who had mentioned a bird with white rump of the size of a thrush, rightly, “trungas” in Greek that later on was identified by subsequent naturalists and with a certain probability, in this sandpiper.

The name of the species glareola comes from the Latin “glarea” = chisel, sand, to indicate the habitats where it lives.

A particularity strikes these sandpipers and many other waders having nidification ranges placed in the extreme north of the continents and are the subject of long distance migrations.

The modus vivendi of these birds is conditioned by one factor only: the haste. It will be for the particular climate they meet over there during the extremely short Arctic summer, it will be for the very long trip they must sustain for reaching the nidification sites, the fact remains that they are always moving and they are able to devote very little time to the most delicate period of their life, the nidification. As a matter of fact, the wood sandpiper is of a remarkable rapidity in this situation. It gets in the nesting sites in May and comes back a few weeks later as it had been a short holiday for a change of scenery and, as we shall see later, practically abandons the progeny that will have to take care by itself. A hard impact with life for these young that will meet a rate of mortality during their first year of more than the 80%.

Some common names given in Europe are: in English Wood sandpiper; in German Bruchwasserläufer, in Spanish Andarríos Bastardo, in French Chevalier sylvain; in Italian Piro piro boschereccio and in Portuguese Maçarico-bastardo. 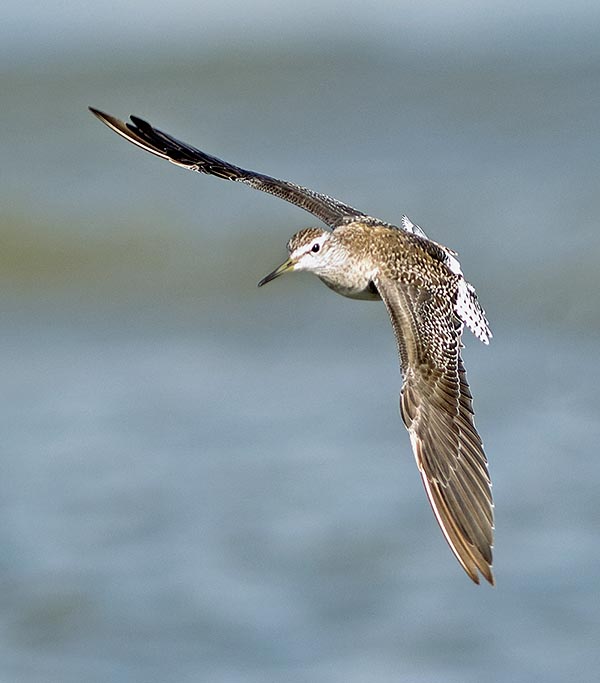 The wood sandpiper lives in the European tundra and in Siberi up to the Pacific coats, north of 50° parallel, migrating in the tropical African and Indian quarters, up to almost reach Australia © Gianfranco Colombo

The wood sandpiper is surely the most abundant member of the genus Tringa besides being one among the strongest migrators.

It lives all over the European tundra and Siberia up to the Pacific coasts north of the 50° parallel and migrates into the tropical African and Indian quarters getting to touch even Australia. It is not rare to observe populations of extreme north-eastern Asia migrating even in Alaska to reach then also the Gulf of Mexico, as well as central-Asian populations exceptionally reaching the Pacific islands.

It’s a strong migrant but some individuals do not disdain to exceptionally spend part of the bad season in the south Mediterranean area continuing later on their voyage when necessary. In Africa, in the tropical sub-Saharan belt, it is one of the most common waders during the boreal winter.

The migration towards the summer quarters is quite slow and sees the wood sandpiper often stopping along the way in marshy areas remaining there for long, up to late April and then reaching the nidification sites with a final and rapid leap.

Much faster during the summer/autumn migration that sees them altready transiting by the end of June, so much to raise doubts if they are laggard birds on their way northwards or if they are anticipations of those getting back south. It has never nidified in Italy but is very common during the migration months.

Like all sandpipers, the woody frequents swampy locations, flooded fields, small lakes with muddy banks, flooded tundras with dwarf willows or very low shrubs at times also in open spaces among taiga groves. It rarely frequents the marine coasts. During the migration it may be found also along dimples with little water and not rarely also around ample ponds on country roads. It does not accept surfaces with depths exceeding the length of its legs though it easily swims without problems, therefore it will never be present in deep water extents or with inaccessible banks. 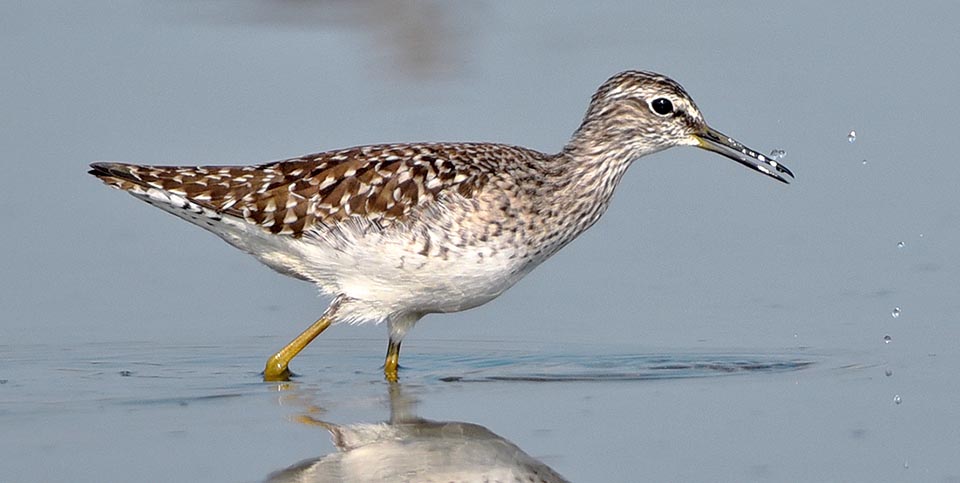 The fingers are not webbed but is linked to water. Frequents swamps, flooded flields and muddy banks with various feeding depending on seasons © Gianfranco Colombo

It fingers, quite long and slender, are completely free and do not have the slightest webbing. During the migrations it is a very social bird and can be met flocks of even hundreds of individuals busy in getting food in the shallow water of some swamp.

The wood sandpipers are very elegant, slim birds, with a well-sized body, nimble and lively and extremely rapid when flying. It is a really very fast bird, as much as the Common snipes (Gallinago gallinago) with whom they share the same habitats and often go along with. Amongst this genus it is probably the smallest one measuring 22 cm only, with a weight of about 130 g and a wingspan of more then 40 cm. The legs are yellowish but at times green that protrude from the tail of a few centimetres when flying and tapered and straight bill about 3 cm long, also yellowish with final dark part. 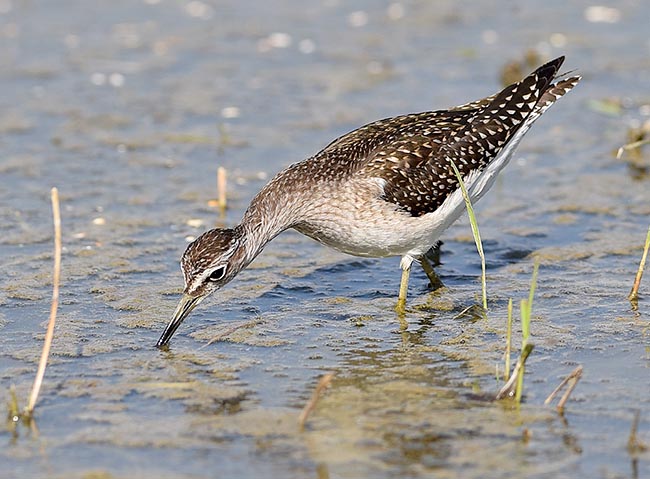 The trained eye can easily distinguish it from its two nearest congeners but it is always not easy to do so from a distance. The rump is strongly spotted white on a compact brown plumage rendering it distinguishable from the green sandpiper that has it, conversely, of a more compact black/olive colour with a less visible spotting.

The head is grey and is marked by a well evident whitish eyebrow that begins from the base of the bill up to reaching almost the nape. Under this line runs a second blackish belt more or less marked that evidences even more the white of the eyebrow. These features render it distinguishable from all its similars.

The body is marked by a light pectoral belt, like an ample collar, of brown grey colour that slowly vanishes towards the abdomen, continuing a little deeper on the sides. The underwing is white with blackish remiges unlike the green sandpiper who has it, on the contrary, almost totally black.

There is no sexual dimorphism. The livery of the young and of the not nidifying adults is less spotted on the back and less streaked on the chest. The rump of the wood sandpiper is slightly more streaked black than the green sandpiper but it is not always possible to distinguish it when flying seen the speed of these birds.

It has a frantic movement especially when looking for food, moving ceaselessly and quickly, wallowing in the shallow water and often catching on the fly the mosquitoes lying over the surface. It is an excellent walker and during this activity walks for hundreds of metres in short time, going back and forth sifting accurately every corner of the marsh. When taking off, sudden but little noisy, it shows the typical white rump accompanied by an unceasing series of alarming titiulì titiuliì that continue also when well far away. The trajectory of the flutter is more linear and less vertical than that of the green sandpiper that usually rears up more. 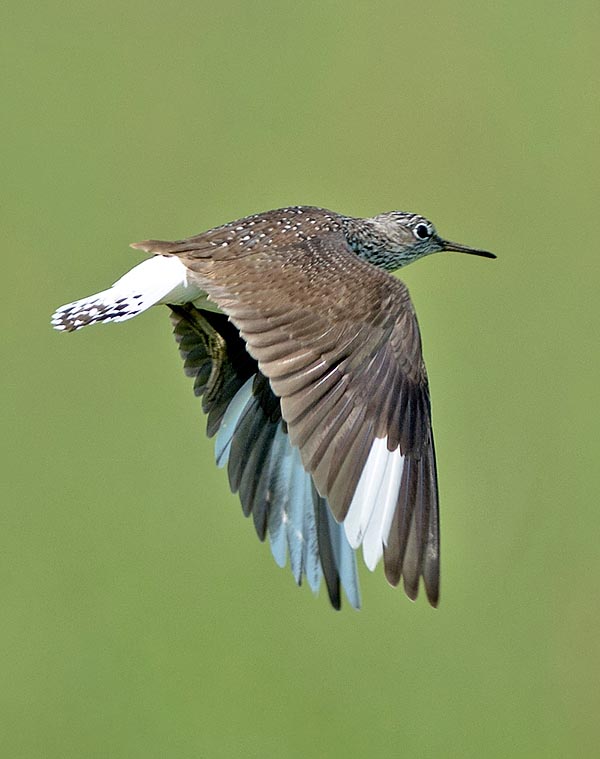 Rare leucistic specimen with white feathers. Tringa glareola is an excellent flyer, but can also run on the ground or stunt on the water surface to catch a mosquito. Frantic movements when looking for food © Gianfranco Colombo

Once reached the nesting sites, the wood sandpiper finds in a very short time the female with which it will mate and that soon after will begin to lay the eggs. Matter of few days and the family is done! The couple is monogamous and lasts only one reproductive season.

Not all nidificate but the bachelors will remain on the nidification sites till when the couples that have reproduced will leave the summer quarters. Also the nest has nothing of architectonical and requires very short time for making it.

Usually it is a slight dip dug in the ground, close to a small shrub under which it stays sheltered and hidden or at times usurps old nests of turdids on bushes or trees that it accomodates carrying some dry grass and light foliage. Hence the name of woody sandpiper.

Four eggs are laid of cream colour strongly spotted of black/greenish and with a very pyriform shape. Both parents will be engaged in brooding even if the greatest part of the 21 necessary days will be cared by the female.

The chicks, nidifugous, come to life with a slight and fluffy down and can already feed after a few hours from the hatching but will not be cared by the female.

In fact, at this stage the mother abandons the young and also the partner in order to devote itself in a rapid flattening to recover the weight lost during the brooding. In fact, it spends all the time looking for food till when, feeling ready, will restart for the winter quarters.

Conversely, the male will remain a fex weeks more in loco to care the progeny, till when the nestlings will be able to fly. The growth is fast, due also to the fact that the duration of the day at those latitudes is often close to the 24 hours, therefore they get much ampler times for feeding thus decreasing the times of growing. The maturity is reached at the first year of age with a life expectancy that can reach the ten years. The wood sandpiper has a feeding that varies during the different seasons, but usually it nourishes of insects and their larvae, of arachnids, earth worms, of tadpoles and small fishes, of caterpillars but also of vegetables and fermenting seeds.

Like all nestlers in the soil and in open areas, also the wood sandpiper counts among its foes the fox and other mustelids and, from the air, seagulls, skuas and hawks. It is not subject to a particular protection seen the huge consistency of its populations and the very vast covered range. It is estimated the global population of this bird is of some millions of specimens.