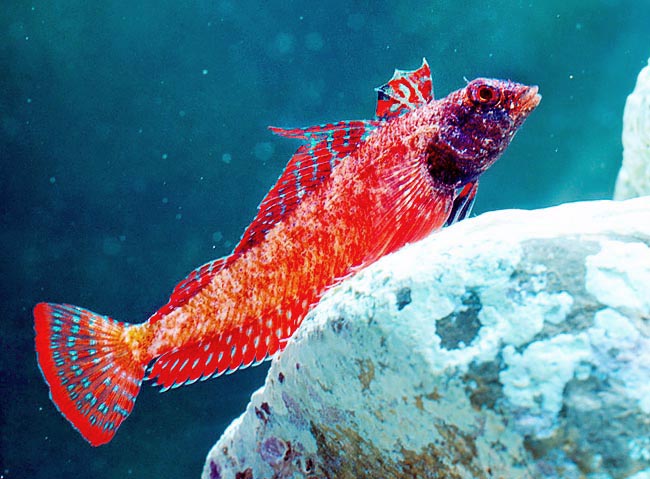 The Red-black triplefin (Tripterygion tripteronotus Risso, 1810) belongs to the class of Actinopterygii, the ray-finned fishes, to the vast order of Perciformes and to the family of Tripterygiidae, which counts about twenty genera and more than a hundred species, present in the marine temperate and tropical waters.

Formerly, this fish was classified amongst the Blennids (Blenniidae), but later on, considering that on the back it has three fins instead of one, that has great ctenoid scales and that the caudal peduncle is completely free, it has been placed among the Clinids (Clinidae), and then recently hived off with the creation, according to the opinions, of the family of the Tripterygiidae or of the subfamily of the Tripterygiinae.

The name of the genus comes from the Greek “tri-” = three and “pteron” = wing, fin, here on the diminutive “pterygo-”, that is, small wing, small fin, with reference to the three dorsal fins.

The name of the species “tripteronotus” has the same Greek root “tri-” = three and “pteron-” = wing, with the Latin addition “notus” = known, noted. In conclusion, it reiterates that it is and easily recognizable fish due to the three aforementioned fins. 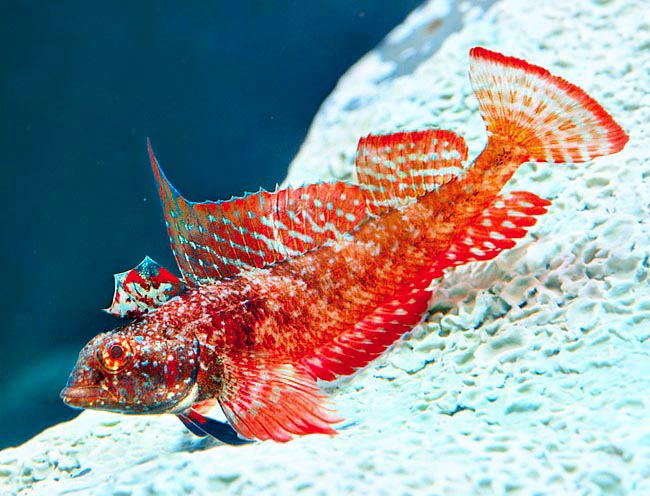 The Red-black triplefin is endemic to the Mediterranean and Black Sea.

It lives in shallow waters, usually between the 5 and 12 metres of depth, in dark dens in the shade of the rocks, but it has been sighted also in full light, a few centimetres from the surface, among the red seaweeds.

Decidedly sedentary, it never goes too far from home, and when driven off, once the danger has gone, gets back, skipping along into its preferred location, at the centre of a hunting territory of about 2 m of diameter.

It reaches, at most, the 8 cm with a spindly body and big eyes for a perfect vision also in conditions of poor light. They are surmounted, like the fore nostrils, by a small tentacle. The snout is pointed but short, with a large protractile mouth armed by various rows of small sharp teeth arranged like a brush. 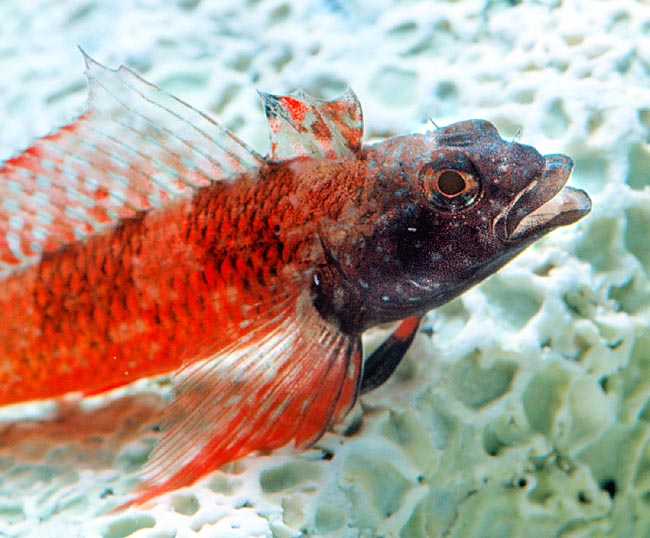 In the breeding time the male is flame red with black head. They mainly eat amphipods © Giuseppe Mazza

A remarkable sexual dimorphism is present.

The males, particularly during the reproductive time, when the head turns black, have an incredible fire red, or, better, “chilli”, colour as recites its Italian vulgar name (“Peperoncino” = Chilli), with pale blue spots on fins and cheeks, whilst the females, with shorter snout and the second dorsal decreasing without plume, have a brownish livery.

In both sexes we finally note five wide vertical dark bands, more or less evident, which appear, when needed, with mimetic function.

In the late spring males do their best to attract the attention of the females with showy nuptial parades, dancing zigzag and the females lay small masses of eggs. These are stuck to the bottom and have a diameter of about 8,5 mm, unbelievable for so small fishes.

During the summer, a female may even mate with more males and the populations, presently stable with a very low vulnerability index of 13 over 100, can double in less than 15 months.