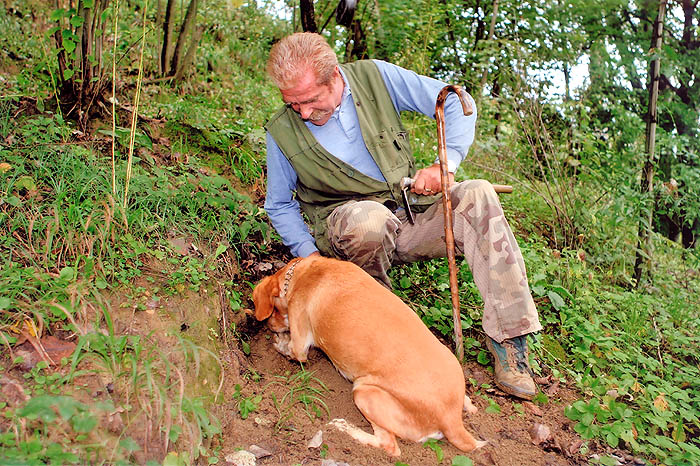 A truffle dog, with its master, looking for the precious prey

The name comes from the Latin “Magnates, -atum” = of the great men, of the lords.

The family of the Tuberaceae is composed by ascocarps of cleistothecium type, that is with the fertile part contained in an involucre. The flesh is composed by fertile structures and sterile ones which create venations disposed in an irregular manner.

The most important genus ascribed to this family is the genus Tuber.

To this genus belong hypogeous ascocarps, of tuberous appearance or sub-globose and, depending on the species, more or less big. Without tufty mycelial hyphae, some species have an excavation at the base. The outer coat (peridium) is smooth, fine-grained or verrucous with very evident pyramidal warts. The gleba is composed by the fertile part producing the ascopores, which, when ripe, will assume the typical colour of the species, the smell, the firmness, the venations which render the flesh marbled, and which hold a particular importance for the determination of the species. 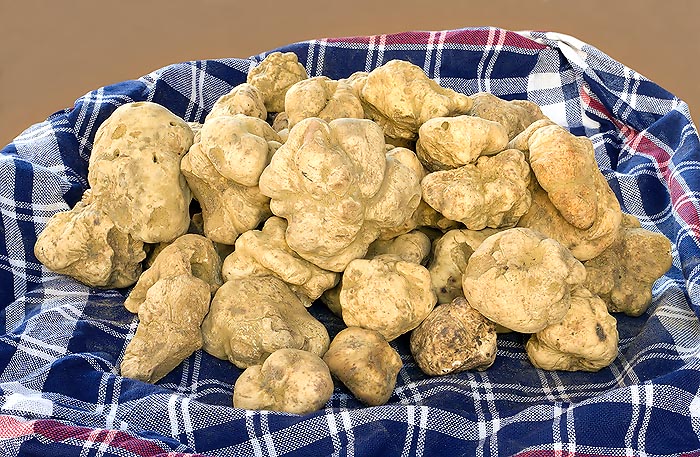 An Alba truffle is recognized at once because of its intense smell and the finely granulated yellowish surface © G. Mazza

The fertile part is composed by disorderly placed asci, from pyriform to sac-like or sub-globose, and usually contain 1 to 5 spores, even 8 at times. The spores are normally ellipsoidal, initially smooth, then adorned by a reticule with more or less wide nets forming alveoli or by more or less long and thorny aculei, brown-yellow at the beginning, and finally blackish-brown.

Ascocarp: tuber-like, from 0,5 to 10-15 cm and even more, lobed, irregular, with gibbosities and cavities of various dimensions; yellowish surface, straw-yellow, pale-ochre, with greenish shades, finely granulated when observed with a magnifying lens.

Gleba: whitish initially, then yellowish, pale-ochre, then reddish-brown or ochre-brown, firm and compact in the young specimens, spongy when the same are ripe; covered by sterile, thin, whitish, unchangeable venations, placed in a confusedly way; the asci, sub-globose to ovoidal, sessile or with a short peduncle, contain 1 to 4 spores. Strong, intense, characteristic smell of methane or of fermented cheese, pleasant taste. Spores: sub-globose, alveolate, reticulate, 25-34,5 × 21,5-30 µm. 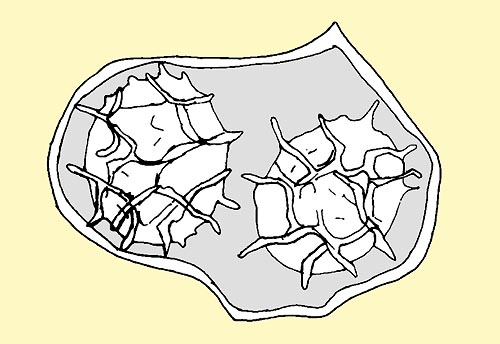 Habitat: it grows deeply interred in the ground under some deciduous trees, especially durmast, oak, Turkey oak, hazel, poplar, etc., from the prairie to the hillside, in autumn and by early winter.

Remarks. It is without any doubt the most famous truffle, considered as the king of the truffles. It is easily identified due to its intense smell, the finely grained and yellowish surface, the spores with wide nets reticulum, the colour of the gleba, paler than the similar species.

The Tuber borchii Vittadini, with which it might be mistaken, is smaller, of a more regular shape and a more reddish colour, and has some microscopic differences, among which the reticulum of the spores which has thick nets.