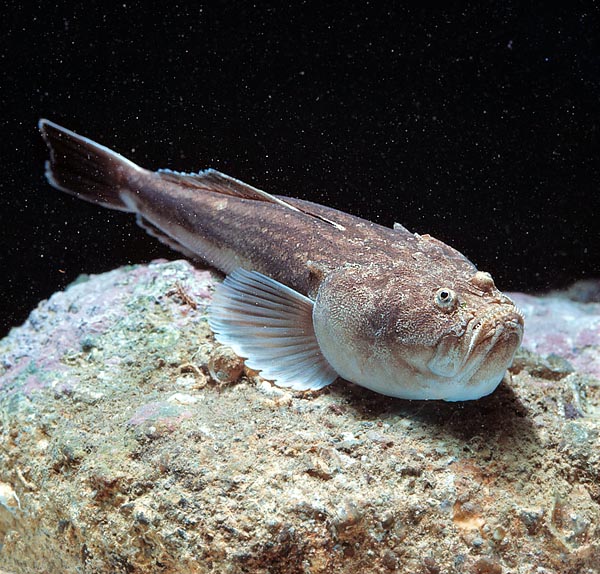 The Stargazer (Uranoscopus scaber Linnaeus, 1758) belongs to the class of Actinopterygii, the ray-finned fishes, to the order of Perciformes and to the family of Uranoscopidae.

The genus was created by Linnaeus latinizing the Greek terms “skopeo” = to look and “uranos” = sky.

Concluding, it is a fish which “looks at the sky”, as it is demersed into the sand, with the eyes on the head.

From this probably also comes the colloquial Italian name of “Pesce prete” (Priest fish), whilst the other Italian name, “Pesce lucerna” (Lantern fish) comes from its shape and from the buccal tentacle it pushes out, like a little flame, for attracting the preys and swallow them treacherously.

In other words, as called in Italian, a “scherzo da prete” (a priest’s trick), maybe a further confirmation of the most common name.

The Latin name of the species “scaber” = rough to the touch, reminds its dangerous spines

It is the sole Uranoscopidae present in the Mediterranean, but it is found also after the Strait of Gibraltar, along the Atlantic coasts, northwards up to Brittany and, southwards, up to Mauritania.

It lives on the soft, sandy bottoms, between the 15 and the 400 m of depth, pushing out only the eyes, practically invisible.

Usually, the stargazer is 20-25 cm long, but may reach, exceptionally, the 40 cm with a weight of 900 g. Massive head and body with an almost circular section compressing towards the tail. The quite small eyes, protected by a transparent tegument only in correspondence to the pupil, and the huge opening of the mouth, with various rows of teeth bent inwards for holding the preys, are placed up, on the head. The head, cuirassed, is protected by 4 bony plates. Two robust venomous spines, behind the operculum, cause not a few incidents to the fishermen who extract them carelessly from the dragnets. It is, in fact, an edible species, ingredient for “brodettos” and fish soups, as the famous “cacciucco alla livornese (Livorno spiced fish soup). 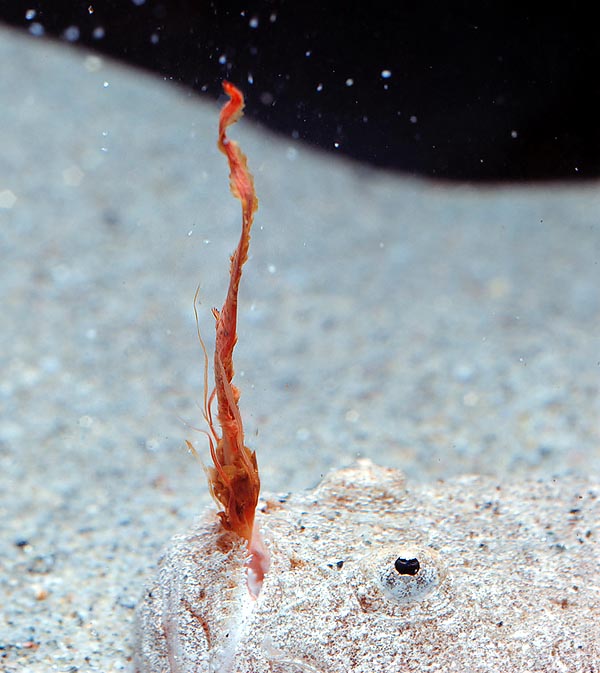 Mouth and eyes over the head, venomous spines, electrical emissions and mobile bait for preys © Mazza

Luckily, the venom is thermolabile, and, usually, the pain of the sting fades after a few hours by dipping the wound into the warm water.

The pectoral fins are very wide and the ventral ones are much advanced. The caudal fin is truncated.

The colouration, ochre-brown on the back, gets paler on the sides and yellowish-white on the belly.

The cephalic zone emits two types of electrical shocks. One is very short and one is longer, variable depending on the sex, which takes place only in summer during the reproductive time. Concluding, it’s a sort of a small sexual dimorphism.

These emissions probably represent a very beginning, frozen in the time, of the evolution of the electrical organs of the fishes.

The stargazer is a quiet and opportunistic predator, nourishing of benthic fishes, worms and crustaceans.

When it identifies a possible prey it emits from the central part of the jaw a thin and fringed appendix, which starts moving relentlessly in order to excite the curiosity and attract the ill-fated. I have observed several times the event in my aquarium, and the rapidity with which it is able to such the victim is impressive.

In the Mediterranean, the reproductive period goes from April to August, and the eggs, pelagic and floating, are about 2 mm long. The young nourish of plankton. When they are 11 mm long, the eyes are still lateral, but later, around the 24 mm, they migrate upwards and at this moment begin the benthic life. They will reproduce, in their turn, once reached the length of 17-18 mm. The vulnerability index of this species is of 44 over 100.