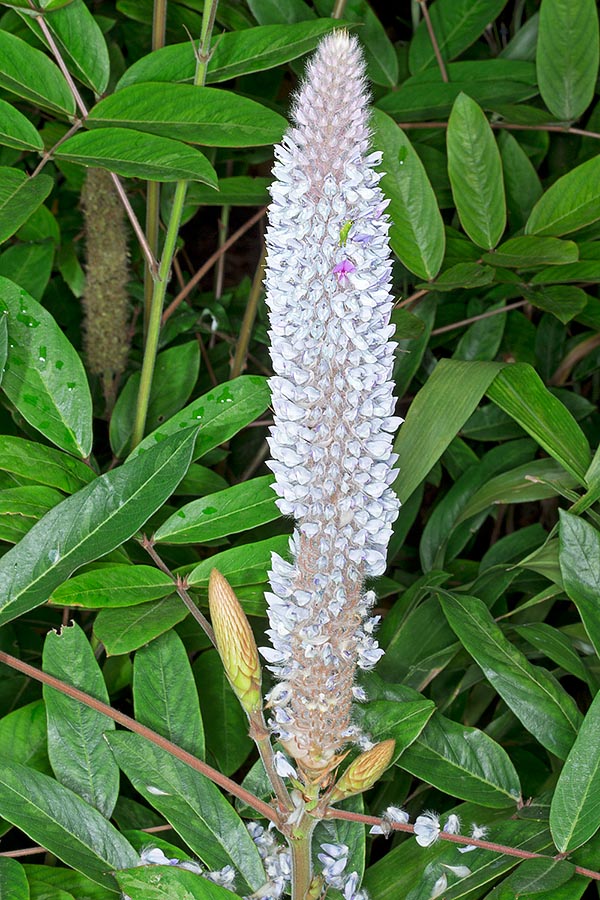 Native to South-East Asia, the Uraria crinita is a small shrub reaching the 150 cm © Giuseppe Mazza

The species is native to Bangladesh, Cambodia, China (Fujian, Guangdong, Guangxi, Hainan, Jiangxi and Yunnan), India (Arunachal Pradesh, Assam, Manipur, Meghalaya, Mizoram, Tripura), Indonesia, Java, Laos, Malaysia, Myanmar, Philippines, Ryukyu Islands, Singapore, Sri Lanka, Sumatra, Taiwan, Thailand and Vietnam where it grows in the forests at the margins of the clearings, in the prairies and in degraded areas, up to about 1000 m of altitude.

The Uraria crinita (L.) Desv. ex DC. (1825) is a small shrub, 1-1,5 m tall, with erect stems having greyish bark and young pubescent branches. The leaves, on a 6-15 cm long petiole, are alternate, imparipinnate, with 3-9 opposite oblong to ovate-lanceolate leaflets with acute to obtuse apex and entire margin, 6-15 cm long and 3-8 cm broad, with the terminal leaflet usually bigger than the lateral ones, of intense green colour.

Sessile or subsessile terminal inflorescences, erect, cylindric, 15-30 cm long, covered by white-greyish down, with a multitude of tiny hermaphroditic flowers in pairs subtended by a deciduous hairy bract. Calyx, covered by white down, with 5 lobes, the 3 lower ones about 3,5 mm long, the upper ones about 3 mm, papilionaceous corolla of purple or lavender colour, 6-8 mm long, with 10 diadelphous stamens (9 with the filaments fused together and one free).

It reproduces by seed, previously immersed in water for one day, in draining loam maintained humid at the temperature of 24-26 °C.

Species often cultivated in the origin countries as medicinal plant, due to its attributed virtues, and ornamental, due to the characteristic inflorescences, occasionally is employed for enriching poor soils, being the rooting apparatus able to fix the atmospheric nitrogen, like other Fabaceae, and as “green manure”, being able to give the soil nitrogen and minerals. 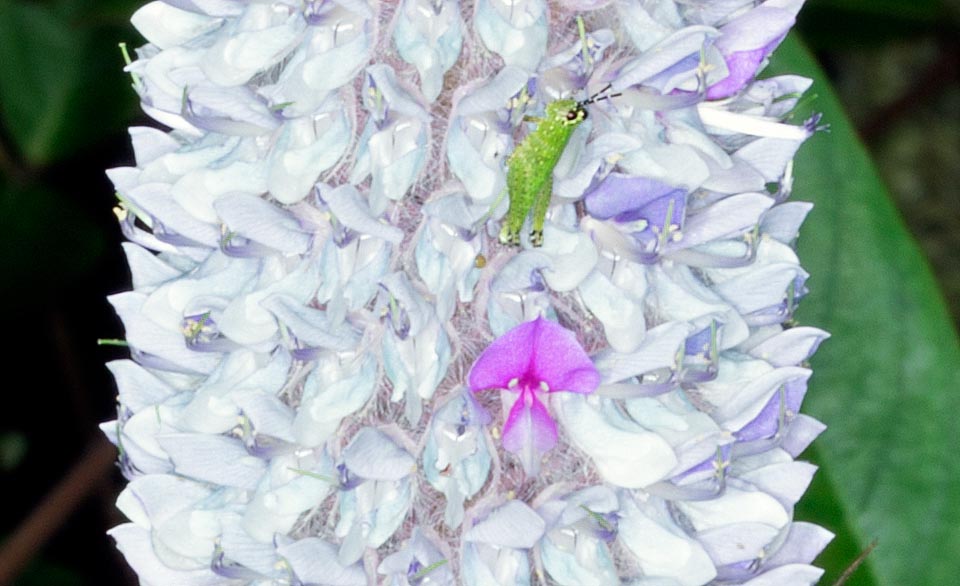 It requires tropical or subtropical climate, an exposition in full sun or slightly shaded and prefectly draining soils, not standing the water stagnations, preferably sandy, even if poor, moderately irrigated.

Various parts of the plant are since long time utilized in the traditional medicine, Chinese and Indian in parrticular, as febrifuge, cough sedative, haemostatic, in cases of dysentery, diarrhoea, skin diseases and other pathologies.