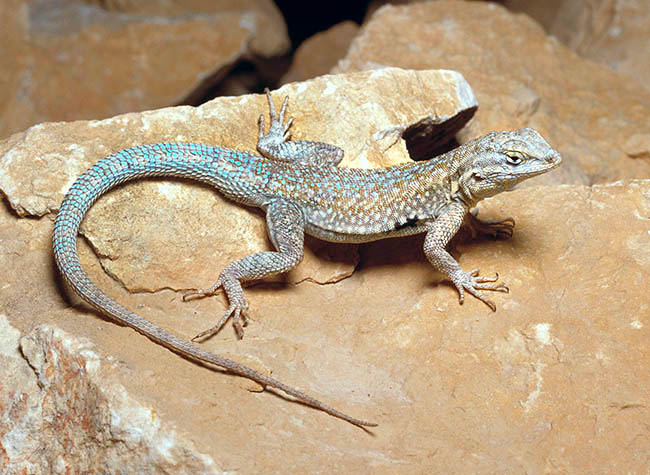 Small, not beautiful, but surely useful, seen that only one itself devours 9000 insects mostly harmful in one year, the Uta stansburiana is a small lizard belonging to the family of the Phrynosomatidae that, excepting the tail, measures only 6 cm. It lives in USA and in the north of Mexico, in arid or semi-arid zones up to more than 2700 m of altitude. The livery is brown with variable spots and patterns and a prevalence of blue small dots on the back of the males that in the reproductive period can choose among 3 liveries, each one with advantages and drawbacks, linked to the territory control. The males with the orange throat have a vast one with many females, they are the super-dominant, but must fight with all other males. Those with blue throat are content with a small territory, with one or two females. Those with the yellow throat, that are wandering without a territory, disguise as females and mate sneakily with those of others, except then to be killed and to become fathers after death if they are surprised by a dominant male. The females do not run risks. They usually lay 5 eggs, at times 9, even 7 times per year © Giuseppe Mazza