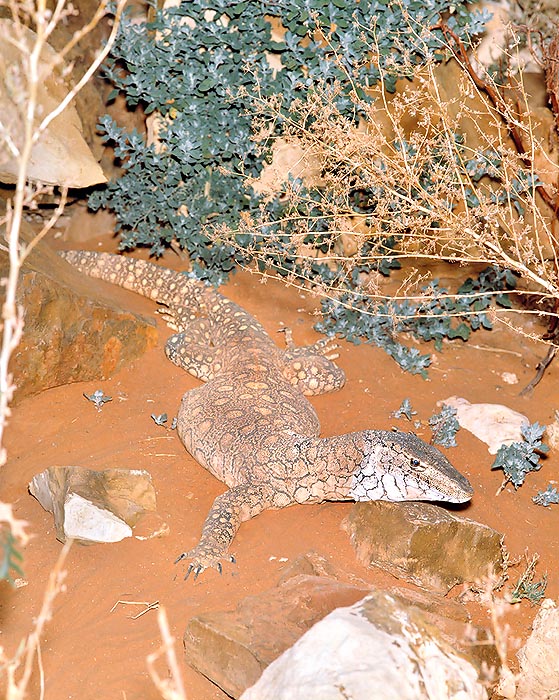 A Varanus giganteus in its habitat © Giuseppe Mazza

The Perentie is only found in the arid regions of Australia, they are not known to occur in Victoria, and possibly New South Wales. Populations of Perentie exist on islands off the western coasts with a steady population living on Barrow Island. Being a desert species they do not occur in tropical locations thru their range.

The Perentie is the largest lizard in Australia. Adult males average 2 m with a combined weight of 5-12 kg. Specimens living on Barrow Island are believed to obtain larger average sizes than mainland populations. Females average 1.3 to 1.5 m total length. Hatchlings average 25-50 g in weight and 17-40 cm in length, thus making hatchling Perentie one of the largest lizards at birth.

Long considered one of the most attractive of lizards, Perentie are embossed with large yellow spots running along their backs on a copper brown colored base.

From the chin to the base of their tail a creamy white coloration covered with faint gray to black banding adorns their underside. In most specimens the neck and cheeks are brightly patterned with a bright white base color covered with a dark grey reticulated pattern.

As a mostly terrestrial species Perentie are equipped with very muscular legs, however they are accomplished climbers as well as excellent excavators. Tail length comprises about 50% of the total length; coloration consists of bandings and spots. The tail has a small keel; the tip is usually solid yellow in coloration.

Mating has been documented to occur in spring and summer. Ritual combat between males has been observed for this species and usually occurs in the presence of the female. Eggs are deposited in deep sandy burrows or termite mounds. Clutch sizes range from 8-15 eggs, depending on the size of the female. Incubation can last as long as 9-12 months (longer incubation times occur overwintering) with emerging hatchlings appearing the following spring. Often female home ranges are overlapped by 2-3 males. Speculation of pair bonding with this species has been noted but not fully documented.
Egg deposition by gravid females is thought to take place at night, and in one documented instance (captive female) deposition lasted 8 hours beginning at 4:30pm and ending at 0:30am. 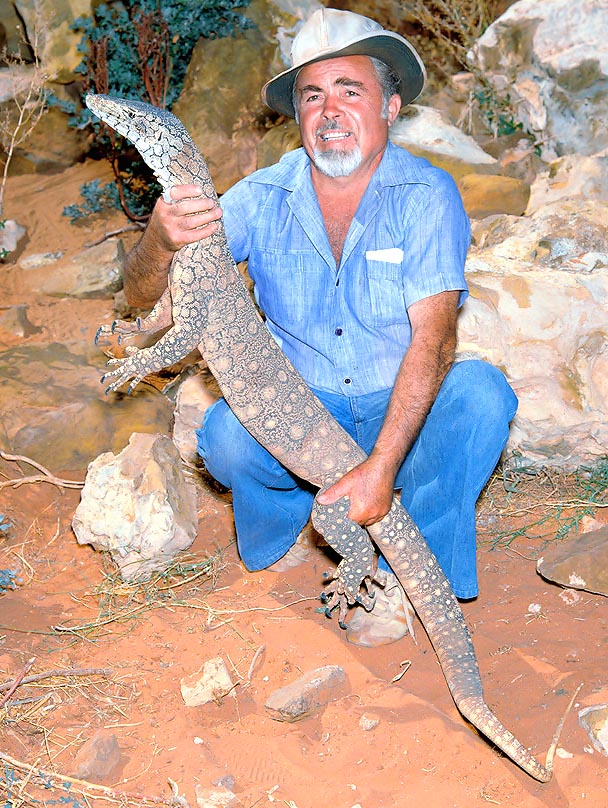 These preferred locations often attract multiple sizes and sexes of Perentie. Smaller specimens living amongst microhabitats avoiding becoming prey. As an apex predator most any animal they encounter is considered prey, including other Perentie.

European hares have been a benefit to Perentie and in harsh time can make up a large portion of their diet as carrion.

Island specimens are known to feed on hatchling sea turtles as well as sea turtle eggs while patrolling beaches.

Perenties have an immunity to snake venom and will consume venomous snakes with regularity.

As hatchlings Perentie are endowed with a large disproportion head aiding the ability to consume larger prey items such as small lizards.

This evolutionary gift helps young Perentie grow at a fast rate increasing their overall size and mass in a short amount of time. Adults have been observed consuming large prey items such as rabbits, and large lizards whole.

Observations prove Perentie to be quite a wary species. Approaching threats are quickly perceived aided by their keen eyesight. Perentie when alarmed are extremely fast sprinters, one observation demonstrated the amazing speed achieved resulting in a bipedal sprint over a variety of terrain to a large rock pile 50 m away. Pattern and coloration of this species also strains observation given their ability to blend in the surrounding habitat while remaining motionless.

Perentie are protected thru out their range by Australian law and listed by CITES as Appendix II species. Perentie are housed in very few zoos world wide, the highest concentration of captives are kept in Australia. Despite best efforts successful propagation has only been achieved with captives housed in Australia. The 1st successful breeding was achieved by Joel Bredl in 1986 at his reptile park in Renmark, South Australia resulting in 6 hatchlings.

Life expectancy for Perentie ranges from 15-20 years, possibly longer given their expansive range and secretive nature. As captives a few have lived as long as 20 years. As the undisputed king of the desert they remain one of Australia’s most magnificent creatures.