Varanus varius occurs over most of eastern Australia. Population densities are highest in Queensland, New South Wales, and Victoria. South Australia is also part of their range however only small sections of the south east side of the state are included. The northernmost range extends into Cape York, Queensland close to the coast. Varanus varius does not occur in Western Australia and Northern Territory.

Adult average length is 1,5 m. Specimens of 2 m have been documented but are rare. 7-14 kg is average weight for both sexes, generally males are larger than females. Neonates range in size from 28-36 cm and range from 16-25 g in weight. Varanus varius is often considered the 2nd largest monitor lizard in Australia.

Pattern and color variation is quite diverse from the north to the south of their range. Basic body coloration ranges from brownish yellow to bluish black. In most instances the front legs are banded with white or yellow. This banded pattern carries over to the rear legs as well, however there is variation and can consist of spots, and ocelli. Populations located closer inland are mainly spotted, while coastal and some of the southern localities almost appear all black in color. The darker coloration is broken up with a series of white banding running along the back.Facial patterns consist of 2 black bands, usually the tip of the snout or reverse. 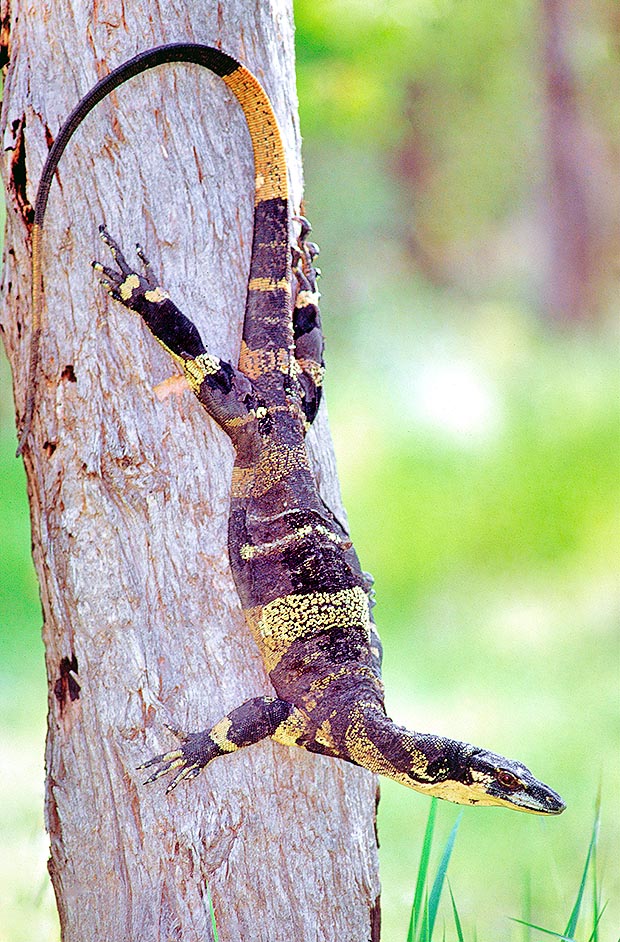 The Varanus varius is an excellent climber © Robert Ashdown

In some specimens it can be a very bold pattern of dark blue with a creamy white coloration. Spots and ocelli vary from yellow to white in color. Neck and belly patterns are usually heavily banded with dark blue and white. Tail coloration can vary from heavily banded and numerous to faint bands broken into small ocelli and spots.

Found in New South Wales and northern Victoria is the Bell’s monitor. Long consi- dered Varanus varius belli this anomaly has a pattern consisting of large usually equal bands covering from head to tail. The basic body color can be white or yellow with either black or brown bands. Most specimens have little to no spots or ocelli.

There has never been a documented reason to explain this rather unusual pattern. Bell’s lace are found in the same locations as the nominate form and nests have been documented to contain both pattern types of neonates. Physiologically speaking aside from their pattern difference Bell’s lace is the same and as a result is considered Varanus varius.

Being a superb climber Lace monitors are endowed with very powerful legs equipped with very strong and sharp claws. When combined they have the ability to hang from a tree trunk, in a somewhat relaxed state with the slightest use of energy. Lace monitors are powerful diggers as well, while foraging prey items can be unearthed quickly as well as ripping thru rotted timber. Female Lace monitors can easily dig thru the tough outer walls of termite mounds during nesting cycles. Lace monitors will consume carrion and utilize their front claws to tear at flesh.

The tail length of Varanus varius is exceptionally long, nearly twice the length of the body. This specialized tool aids in climbing and has prehensile capabilities.

It is also used defensively as a whip by striking blows at threats. At the base it is round in diameter and quickly tapers off in a triangular shape.

Mating activity occurs generally in the spring and summer. Temperate locations in the southern ranges occur in spring, in the northern warmer ranges during the summer. Receptive females can draw many males from surrounding territories resulting in ritual combat between them. Combat between males usually occurs in view of the female. Typically only the largest males breed with the females, however it has been documented that subordinate males will breed with the female as well.

Female lace monitors lay their eggs in active termite mounds; the most commonly used species is Nasutitermes exitiosus. Clutch sizes range from 8-19 eggs averaging 50-65 grams in weight. Nest chambers are located in the center of the mound providing proper heat and humidity. Excavation by the female is quickly repaired by the termites providing an ideal, protective nursery. Incubation can vary from 6-10 months, temperate zones taking the longest usually overwinter.

The release of the hatchlings has been researched extensively with many different results. Prior beliefs explained females would return to the mounds to dig up and release the hatchlings; however recent field studies prove that both sexes have been involved in the process. Theories range from purposeful excavations to accidental foraging behaviour. In one instance a freshly excavated mound contained both adults and hatchlings within close proximity of each other. No predation of the hatchlings was noted, even though the adult monitors could have done so easily. Gravid females are also believed to reuse the same nests within their territories thus releasing last years clutch by depositing new ones. This example may explain the non-predation behaviour of the female ensuring the success of her brood, however the interactions of hatchlings and other adults is not completely understood. It is possible a degree of recognition deposes predation behaviour amongst conspecific adults increasing survivorship of the hatchlings. 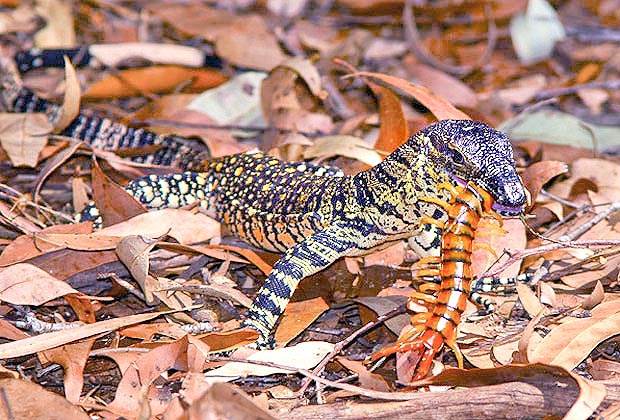 A young Varanus varius struggling with a centipede © Steve Wilson

Trees provide many uses for them and usually play a prominent role thru territorial ranges.
Providing shelter and means of escape from predators are most common usage.

Observations made demonstrated routine daily patterns in some locations, best achieved with binoculars. In 90% of encounters lace monitors were witnessed foraging at ground level along cleared paths.

Perceived threats, mainly my upright presence was detected many meters away resulting in a quick scatter to the nearest tree.

While foraging lace monitors will purposely pause every 4-5 steps. During these pauses they will cock their head in an upright posture and look into their immediate path. Foraging lace monitors walk in a swinging type of gait tongue flicking every few seconds. Hatchlings utilize trees more than adults and may spend much of their secretive lives living amongst the shelter and feeding on the insect prey provided.

Lace monitors have long been considered a highly arboreal species; however during times of activity they are mostly terrestrial in behaviour. Territory can range in size for both sexes, males usually having the larger range (2-5 kilometers) females (1-3 kilometers). Often female ranges are overlapped by 2-3 males. Home ranges can shift due to environmental changes; however adults have been known to remain in the same locations for many years. Home ranges usually have some type of water body included, not considered aquatic they can swim and will forage along shores.

Varanus varius feeds on a wide variety of prey items and appear to be rather fond of birds. During times of abundance they have been documented gorging on bird eggs and fledglings. Other prey items include mammals, marsupials, reptiles, bats, insects, and vertebrate eggs.

In some locations prey items such as the introduced species Lepus europaeus European hare have a vital role in their diet due to their abundance. Rabbit pups are easy meals and road killed adults provide carrion. 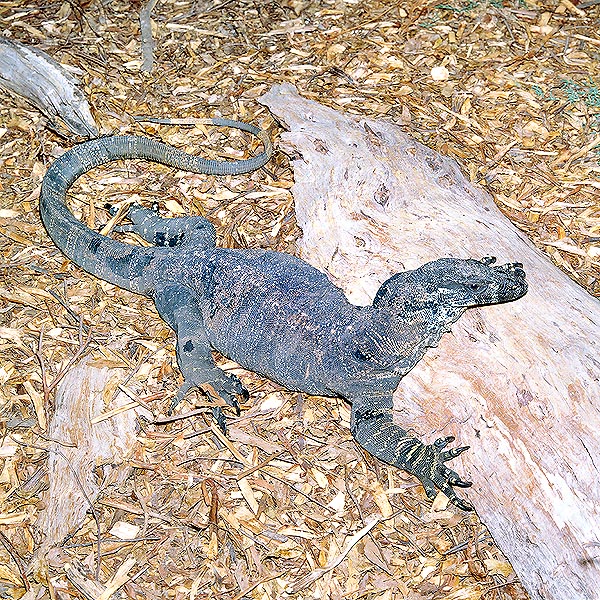 In situ observations demonstrate their intelligence by exploiting urban camp sites for easy meals as well as their prowess as thieves. Scraps of fish as well as the gut contents scavenging were witnessed at a fish cleaning station in New South Wales. This population overtime familiarized the activates of the fishermen awaiting the free meal coming to them once they left. During the course of the fishing season many specimens were witnessed gorging on the scraps.

Hatchling lace monitors fall prey to a host of predators. As young adults raptors and introduced species such as feral cats have an impact on their survival. Adults are generally not preyed upon, however dingoes Canis familiaris dingo will consume them. Perceived threats result in a quick scuttle up the nearest tree.

Lace monitors will climb up a tree in a spiral fashion avoiding pursuing threats. Once they feel they have reached a secure height they will patiently wait for the threat to leave.

In one instance this lasted over sixty minutes. One introduced species has a crippling effect on many native Australian species.

Rhinella marina the cane toad is highly toxic and when consumed leaves the predator to die a rather painful agonizing death.

Unfortunately these invasive toads are found in the same locations of lace monitors, and given their natural foraging behaviour they are consumed resulting in their demise.

Automobiles take their toll on lace monitors as well, in most instances they get hit while feeding on carrion that was killed itself by an auto. Other instances involve lace monitors basking on warm asphalt oblivious to traffic. Though they have excellent eyesight large objects such as automobiles are not registered as a threat. Road side lace monitors are easily approached in this fashion, however quick movements or getting out will result in their quick retreat.

Lace monitors are fairly common thru out their range. Like all Australian flora and fauna they are protected with healthy populations. Lace monitors are listed as Appendix II on the CITES list of endangered species. They are housed in many zoos across the world and quite commonly kept as captives in Australia.

Their life expectancy was once believed to be 15-20 years, this is a rather appropriate average for a typical wild lace monitor, however many have been documented over the 20 plus year range. Speculations have been made they might live as long as 40+ years.