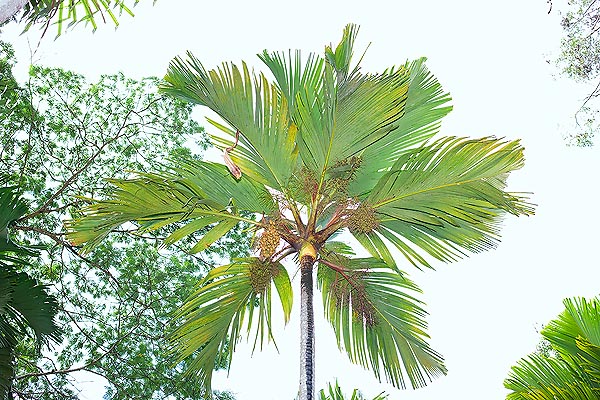 The Verschaffeltia splendida H. Wendl. (1865) is endemic of the Seychelles Islands (particularly, the islands of Mahé, Praslin and Silhouette), where it grows mainly in the humid forests on the rocky slopes.

The genus is honoured to the Belgian horticulturist Ambroise Colette Alexandre Verschaffelt (1825-1886); the name of the species is the Latin word “splendida” = magnificent, splendid.

Called locally “latanier latte”, it is known in the English speaking countries as “Seychelles stilt palm” and “stilt palm”.

Palm with solitary stem, densely thorny, which may reach a heigth of 20 m, with a diameter of 20-30 cm and with several robust aerial roots, which develop like stilts at the base; the basal sheath of the leaf and the petiole are, them too, densely thorny, especially when young.

The leaves, of a bright green colour, from obovate to oblong, bifid, are 2 m long and about 1,2 m wide, with indented margin; the lamina, initially entire, tends to part irregularly into segments more or less numerous due to the action of the wind, thus losing part of its charm. 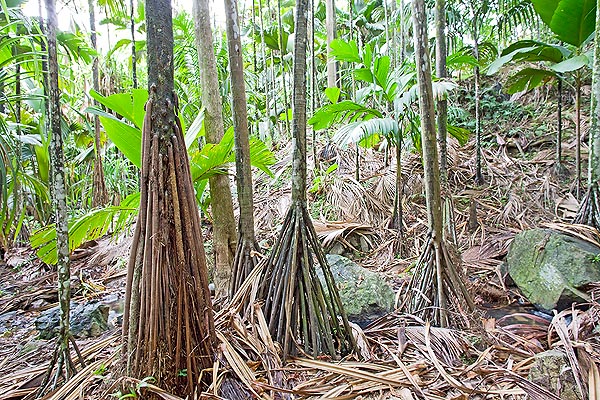 The ramified inflorescence, which develops between the leaves, is about 2 m long and carries flowers of both sexes. The fruits are spherical, 22-25 mm of diameter, of a dark green colour.

The seeds germinate in about two months.

Extremely ornamental plant cultivable only in the wet tropical climate zones, in partial shade when young, in full sun when adult, in soils rich of humus and kept constantly humid but perfectly draining, as it does not stand water stagnations.

If possible, it is to be placed in a location sheltered from the wind, which would cause damages to the great decorative leaves. It is one of the most sensitive palms to the low temperatures, as it gets damages already when at few grades over zero, even for short time, and is particularly intolerant to the dry air. The stems have been utilized in the past by local populations for building houses, practice which has caused a drastic reduction of the specimens present in the wild, now confined in the most impervious and of difficult access zones. 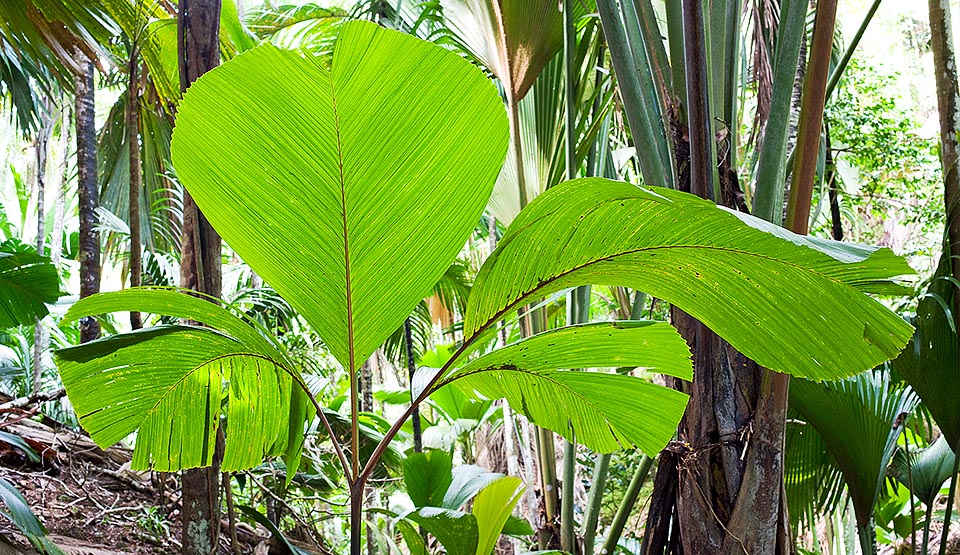 In the young plants the foliar lamina is whole, but then splits irregularly into more or less numerous segments caused by the wind © Giuseppe Mazza