Verticordia : the “ feather flowers ” which come from Australia

They come from far away. Difficult and precious feather flowers. Originating in Australia can also be cultivated in our climates. Flowers never seen before with finely fringed petals similar to feathers. 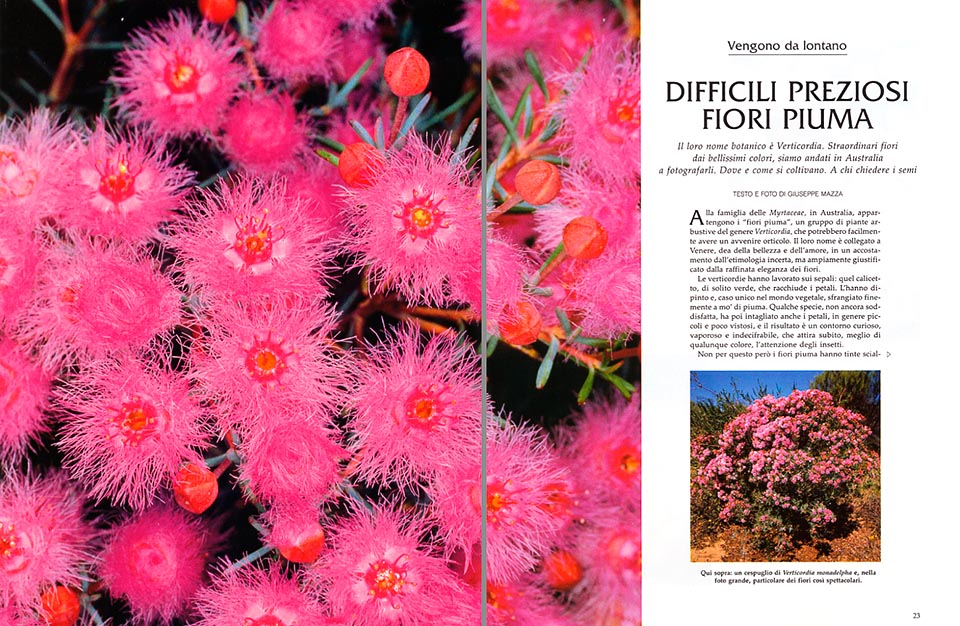 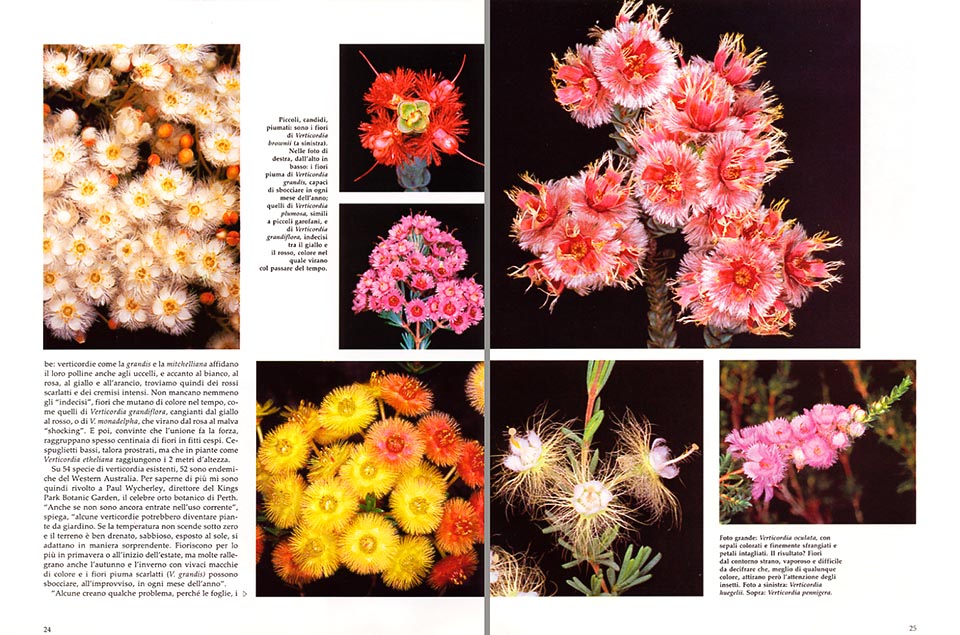 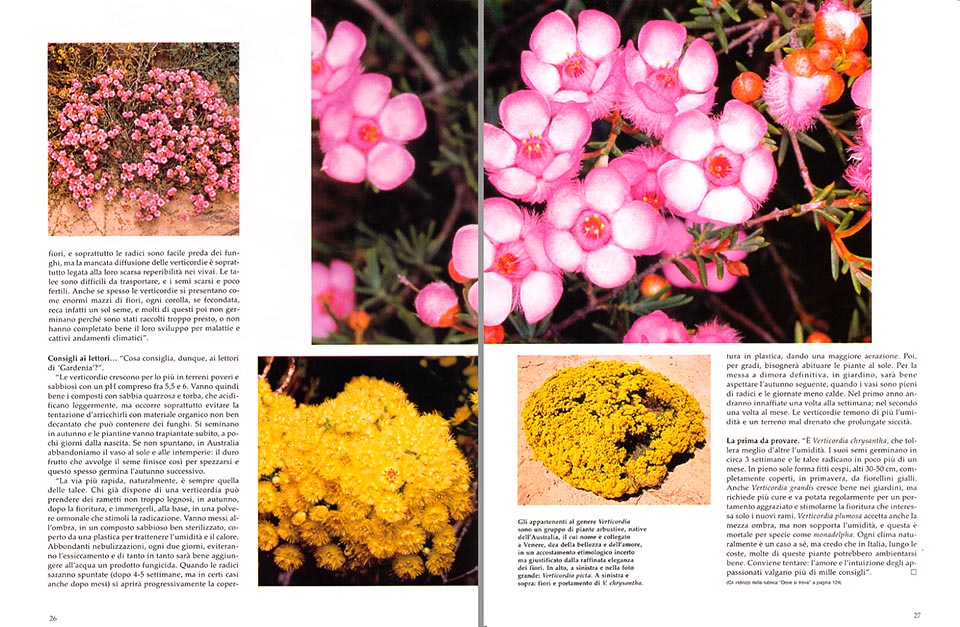 Do you remember the eucalyptus? The flower without petals, with the complex of being ugly, which resolved its problem developing the stamens and uniting them in showy inflorescences?

To the same fanciful family of the Myrtaceae, always in Australia, do belong the “feather flowers”, a group of shrubby plants of the genus Verticordia, which might easily have a horticultural future.

Their name is associated to Venus, goddess of beauty and love, in a matching of uncertain etymology, but amply justified by the refined elegance of the flowers.

Unlike eucalypts, the verticordia have not worked on the stamens, but on the sepals: that small calyx, usually green, which contains the petals. They have painted it, and, unique instance in the vegetable world, finely frayed like a feather.

Some species, not yet satisfied, have then carved the petals, normally small and little showy, and the result, like the eucalypts, is a strange, fluffy and indecipherable contour, which attracts at once, better than any colour, the attention of the insects.

And then of course, the verticordia have not forgotten the intuition of the eucalypts, and being convinced, them too, that union is strength, often group hundreds of flowers in thick tufts. Low little bushes, sometimes prostrate, but which, in plants such as the Verticordia etheliana, reach even the two metres of height.

Of the 54 species of existing verticordia, 52 are endemic of Western Australia. In order to know something more about, I have therefore contacted Dr. Paul Wycherley, director of the Kings Park Botanic Garden, the famous botanical garden of Perth.

Even if they have not yet become of common use, he explains to me, some verticordia might become garden plants.

If the temperature doesn’t fall below zero, and the ground is well drained, sandy, exposed to the sun, they adapt in a surprising way. They mainly blossom in spring or at the beginning of summer, but many of them gladden also the autumn and winter with lively spots of colour and the Scarlet feather flower (Verticordia grandis), can blossom suddenly, in every month of the year.

But then, I interrupt him, how does it go that they are unknown in Europe?

Some of them create few problems, because the leaves, the flowers, and, mainly, the roots, are easy prey of fungi, but the non-diffusion of the verticordia is principally due to their scarce availability in the nurseries.

The species present in the market lessen quickly with the distance: about ten in our country, the Western Australia, 2 or 3 in the other Australian states, and practically none in Europe. The cuttings are difficult to be transported, and the seeds scarce and not much fertile. Even if often the verticordia appear like enormous bunches of flowers, each corolla, if fecundated, carries in fact only one seed, and many of these later on do not germinate, because picked up too early, or because they have not completed well their growth due to diseases, and unfavourable climatic events.

What do you suggest, then?

The verticordia grow up, mainly, in poor and sandy lands, with a pH between 5,5 and 6. Therefore, are quite suitable the compounds with quartz sand and peat, which acidify lightly, but we have especially to avoid the temptation of enriching them with not well decanted organic material, which may contain some fungi. They are to be sown in autumn and the small plants must be transplanted immediately just after a few days from the birth.

If they do not come out, here in Australia, we leave the pot exposed to the sun and the bad weather: the hard fruit which wraps the seed, in this way will break and the seed often germinates the following autumn.

The fastest way, of course, is always the cutting one.

He who already owns a verticordia, can take off some small branches, not too woody, in autumn, after the flowering, and dip them, at the base, in a hormonal powder which can stimulate the rooting.

They must be placed in the shade, in a well sterilized sandy compound, covered by a plastic for maintaining the humidity and the warmth. Abundant nebulizations, every two days, will avoid the desiccation and, every now and then, it will be good to add a fungicide product to the water.

When the roots will come out (after 4-5 weeks, but in some cases, even after months), we shall have to open, progressively, the plastic cover, thus increasing the ventilation.

Then, step by step, we shall have to accustom the plants to the sun.

For the final settlement in the garden, it will be better to wait for the following autumn, when the pots are full of roots, and the days cooler.

During the first year, they will have to be watered once a week, during the second one, once a month.

The verticordia are xerophite plants: they fear much more the humidity and a badly drained ground, than prolonged droughts. The Mediterranean climate, with short autumn and spring rains and long, warm and dry summers, should be, therefore, quite suitable.

Which species do you suggest?

The first to be tried is the Verticordia chrysantha, which tolerates the humidity better than the others.

Its seeds germinate in about 3 weeks, and the cuttings root in little more than one month. In full sun, it forms thick tufts, tall 30-50 cm, completely covered, in spring, by little yellow flowers.

Also the Verticordia grandis grows up well in the gardens, but it requires more cares, and is to be pruned on a regular basis, for getting a graceful appearance (in the wild, it has the tendency to create often some threads, reaching even the three metres of height), and stimulate the flowering which interest only the new branches.

The Verticordia plumosa accepts also the mid-shade, but does not bear the humidity, and this is decidedly deadly for species such as the Verticordia monadelpha.

Each climate, of course, is a particular case, but I think that in Italy, along the coasts, many of these plants could acclimatize well. In any case, it is convenient to try and am sure that the passion and the intuition of the lovers is worthy more than a thousand of suggestions.

Verticordia : the “ feather flowers ” which come from Australia was last modified: May 3rd, 2020 by Giuseppe Mazza