The plant is native to South America (Bolivia, Brazil and Guyana), where it grows at the margins of the rivers, in low, calm or slow, waters.

The genus was honoured to Victoria (1819-1901), the queen of the United Kingdom; the Latin name of the species, “amazonica” = Amazonia, indicates its area of origin.

The Victoria amazonica (Poepp.) J.C. Sowerby (1850) is a perennial, freshwater, rhizomatose, herbaceous plant with the rhizome rooted into the bottom sediment. It has floating solitary leaves, almost circular of 1-2,5 m of diameter, at the extremity of a thorny, flexible, petiole which may be 8 m long, traversed by channels where the air is present thus ensuring the floating and the gaseous exchanges between leaves and roots. 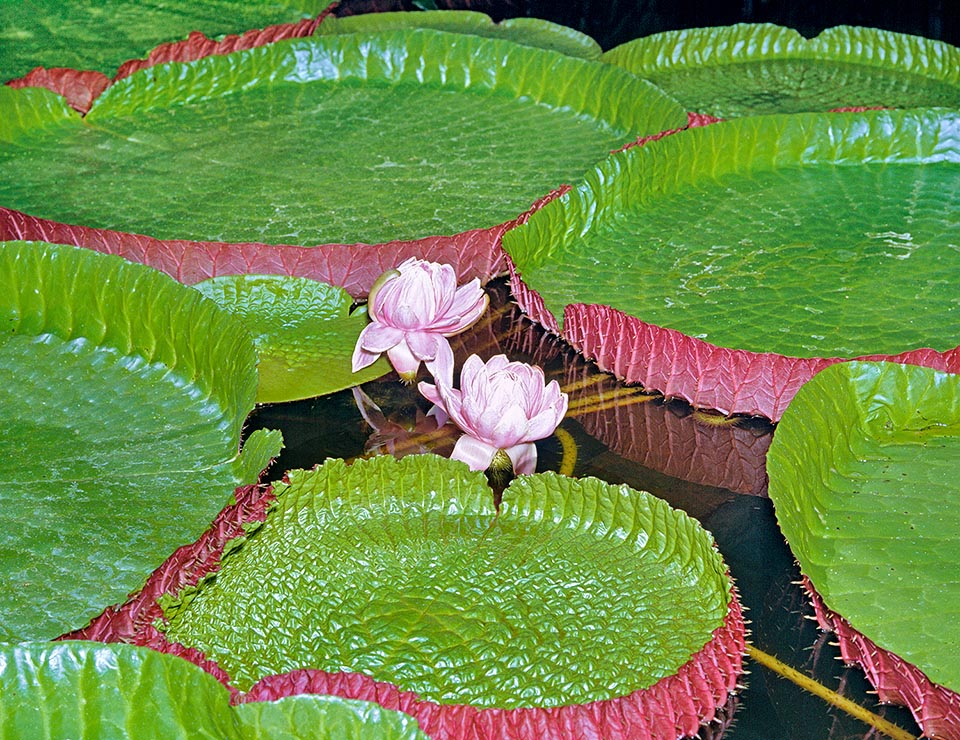 Victoria amazonica is a rhizomatous herbaceous plant rooted at the bottom in shallow, calm or slow waters of Bolivia, Brazil and Guyana rivers © Giuseppe Mazza

The leaves are flat, peltate (with the petiole inserted almost at the centre of the lamina), with the margin raised at a right angle for a height of 5-15 cm, but two opposite slits for the outflow of the water; the raised edge hinders their overlapping, as often happens for the water lilies, allowing the leaves to present the same area to the photosynthesis.

On the upper page the leaf is smooth, water repellent and of an intense green colour, below, it’s violaceous purple and is equipped of protruding and robust nervations, which radiate from the insertion of the petiole, where are present cavities full of air, which allow its floating and keep it flat, rigid and capable to support the weight of some tens of kilos, is uniformly distributed; the lower surface of the leaf is equipped, also in the outer part of the raised edge, of sharp thorns.

The flowers are nocturnal, of 20-35 cm of diameter, solitary over the surface of the water, on a thorny peduncle also equipped with channels where air is present, have 4 brown sepals covered by thorns, 50 and more petals and up to about 200 stamina; the petals are cream white during the first night, pink on the second, then they finally close carrying the forming fruit to the bottom where it continues its ripening, for emerging again when completely ripe. 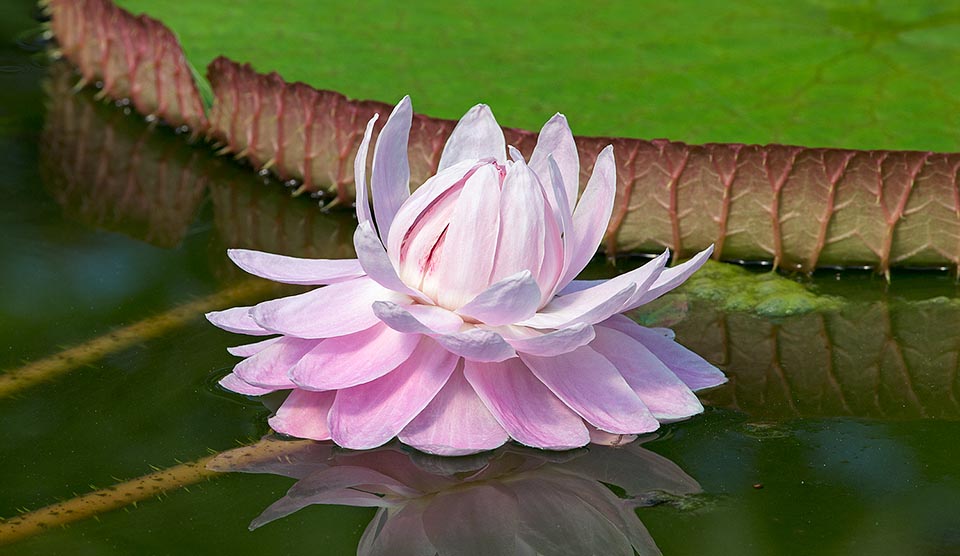 1-2,5 m floating leaves supporting the weight of well distributed tens of kilos, even 8 m long petioles and 20-35 cm flowers that open for two nights in a row © G. Mazza

The flowers have the phenomenon of the proterogyny, the stigma, the female part of the flower, is receptive by the first night, whilst the pollen is released by the second one, and this hinders the self-fecundation favouring the crossed one.

The pollinators are scarabs, in particular Cyclocephala castanea Olivier (1789), Cyclocephala hardyi Endrödi (1975) and Cyclocephala verticalis Burmeister (1847), attracted by the white colour of the petals and by the warmth and the intense odour, reminding to many that of the pineapple, emitted by the flower at dusk after the opening.

The high temperature inside the flower, which may be even 10 °C higher than the environmental one, the colour of the petals, the smell and the abundant sugary substance present, ensure that the pollinator remains long time inside the flower, thus remaining trapped when, by the end of the first night, the flower closes. The following day, at dusk, the stigma is not any more receptive whilst the ripe pollen is released; the flower, at this stage, is not any more appetible for the pollinator, due to the colour of the petals, turned to pink, the absence of heat and of nourishment, and, as soon as the flower opens, it flies away, covered by pollen, towards another flower which has just opened its white petals and pollinates the same. 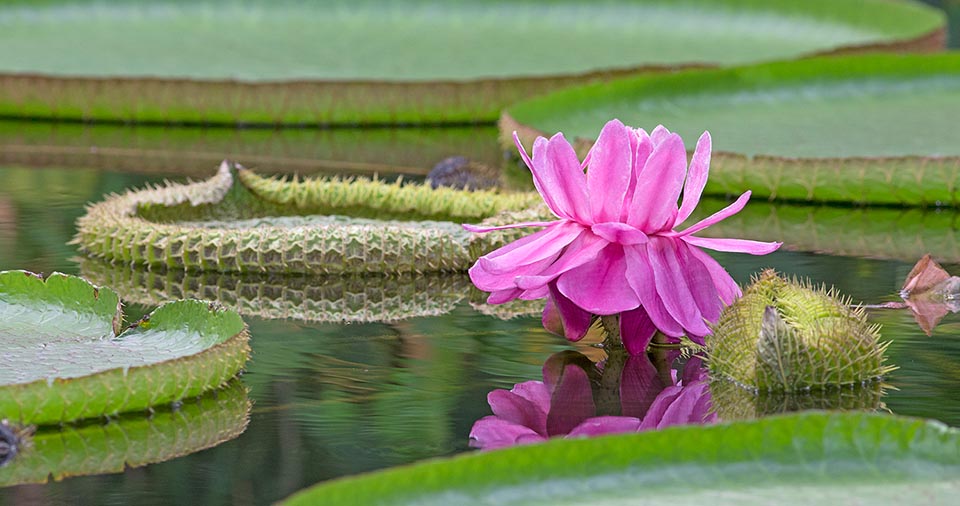 The first night the flower is just pinkish, with sugary tissues, ready to be eaten by pollen loaded scarabs and then to seize them, sated and drowsy, when closes in the morning. The second day the female organ is not receptive any more, pollen is ripe, and when the flower reopens, freeing the floured coleopterans, petals are dark pink © Giuseppe Mazza

The fruits are fleshy, indehiscent (which do not spontaneously open when ripe), green globular, covered by thorns, containing some hundreds of globose seeds of 7-8 mm of diameter, of brown colour, with spongy aril (fleshy involucre wrapping completely or partly the seed), where air is present thus allowing its floating, and therefore the dispersion, till when this does not decay, soaked with water, depositing them on the bottom.

It almost exclusively reproduces by seed, rarely by division, which is to be constantly kept humid, or in water, till its planting, in order not to lose its germination capability. In order to help the germination, which happens in 15-30 days, the seed is to be slightly nicked and placed in water at the temperature of 30-32 °C; the juvenile plants are then placed in a heated pool, covered by water for a thickness of 0,3-1 m, in a clayey substratum rich of organic substance, with the flowering which may take place after about seven months.

It is a humid, Equatorial species as it needs a water temperature of not less 22-24 °C, is cultivated elsewhere, due to its requirements and dimensions, almost exclusively in large gardens and botanical orchards, where it always represents one of the main points of attraction, often as annual, thanks to its fast growth, in spacious pools with high temperature of the water, around the 30 °C, in full sun and frequent and abundant fertilizations.

The rhizome and the seeds, rich in starch, are edible and are, at times, consumed by the native populations. It is the Guyana national flower.