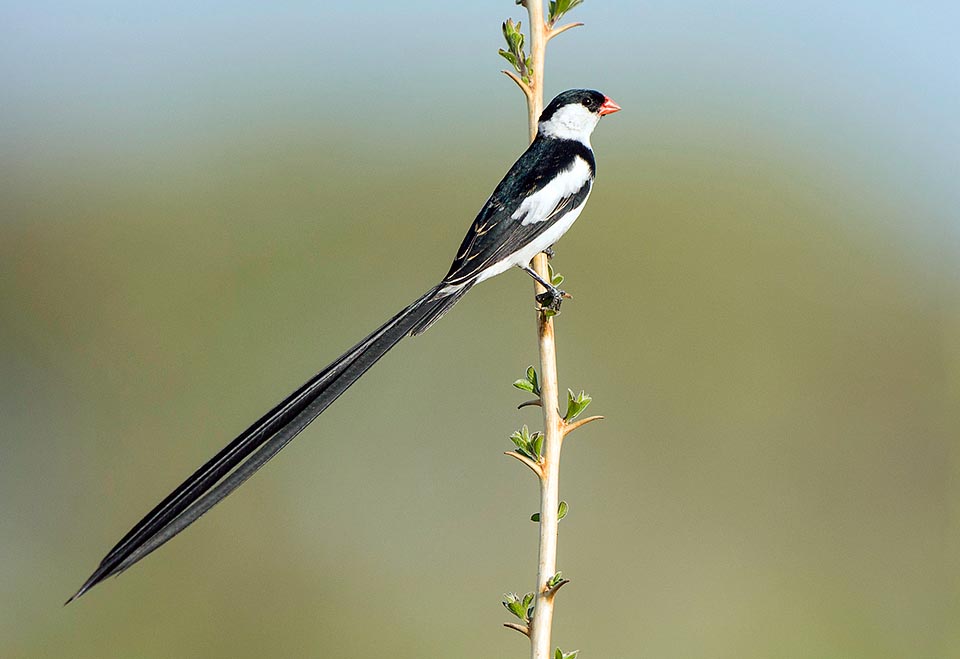 In nuptial period the Vidua macrours male has an immense tail. At home in the sub-Saharan Africa, has been introduced in Puerto Rico, in the Caribbean and in the Hawaii © Gianfranco Colombo

One feels a great disappointment in observing a so beautiful and striking, so alive and lively, so gay and kind birdie while courting its female and then to learn that this last then goes to spawn in the nest of another bird not caring its own progeny.

And yet the pin-tailed whydahs, exceptionally showy small birds during the mating season, behave like the cuckoos and in spite of the much vaunted love for their own chicks and their own progeny, take advantage of the goodness and the distraction of unknown parents for giving continuation to own species.

Africa is the continent of the Pin-tailed whydah (Vidua macroura Pallas, 1764) and of various other congeners almost all characterized by a male that during the nuptial time has a very long parade tail, so long to exceed by several times the length of its body.

These whydahs belong to the order of the Passeriformes and to the family of the Viduidae that include a ten of species typical of the African continent.

The common name of pin-tailed whydah has been taken from the long tail, usually black, of these birds that recalls those adorning the hats of the widows when they did follow the funeral of their deceased husband. Some vulgar European names are: in English, Pin-tailed whydah; in German, Dominikanerwitwe; in Spanish, Viuda colicinta; in French, Veuve dominicaine; in Portuguese, Viuvinha; in Italian, Vedova, and in Afrikaans a noble Koninggrooibekkie (= King with red beak).

The fact that in some names appears the term Dominica comes from the fact that once it was thought that these birds were coming from that part of the world, from where, on the other hand, they have been introduced later on successfully by the man, in particular in Puerto Rico.

The etymology of the specific name has a first version accepted by the whole scientific world that indicates the origin from the Latin “vidua” = widow, whilst another one indicated by Edwards suggests that the name comes from a mispronounciation of Whidah, the name of an old fort in Africa, around which this bird was very common.

The species macroura comes from the Greek makros = long and ourus = tail.

The pin-tailed whydah is native to the African continent and lives in the whole area south to the Saharan belt. It is well diffused in all the territory from Mauritania to Ethiopia and, southwards, up to South Africa with populations more or less numerous depending on the occupied habitats.

Thanks to its beauty there have been, during the last century, many attempts of introduction in similar areas located in other continents, but due to its specific specialization in the parasitism of some well defined species of hosts, the outcome has not been always successful. Nowadays it is present in Puerto Rico, in some areas ot the Caribbean and in the Hawaii Islands.

The pin-tailed whydah loves to live in more or less woody zones in humid as well as in dry habitat, grassy savannahs, sparse forests of acacias and of the Butterfly trees (Colophospermum mopane), an in South Africa in the typical bushveld.

It loves also cultivated zones, parks and gardens and coastal vegetation of rivers and lakes.

As it mainly nourishes of seeds, it is strictly linked to zones rich of grassy vegetation and of wild cereals where it gets its most important food.

The densities of these populations are directly proportional to the availability of food therefore in some areas rich of these essences their number is high whilst in poorer ones it gradually reduces. It goes without saying that all is conditioned by the presence of the species to parasitize, as in the absence of these ones they do not have possibility of reproduction.

When seen in the reproductive season the male has an absolutely unmistakable and, to say the least, spectacular, livery. The back is jet-black with white alar coverts and the head has a well defined black hood limited to the line of the eyes, also black, ending on the nape. The chest is completely candid white.

Ended the nuptial season, that lasts very few weeks, the red beak of the male fades and besides the tail loses the white and black livery trasnforming in a normal small bird quite similar to the female. This one, for laying furtively the eggs in others’ nests, always shows a low profile with banal brown hues © Giuseppe Mazza

Amazing is the black tail long up to 22 cm which leads the total length of this small bird to about 33 cm, formed by the elongation of the four central feathers that widen in the median part to form a remarkable swelling.

The short and massive beak is of bright coral red colour.

Conversely, the female is completely different, so much to resemble another bird species. It is of more or less streaked brown hue, with the chest of cream colour and the head longitudinally crossed by two stripes on the apex and a quite marked belt going from the eye up to the nape. The beak is fleshy grey. 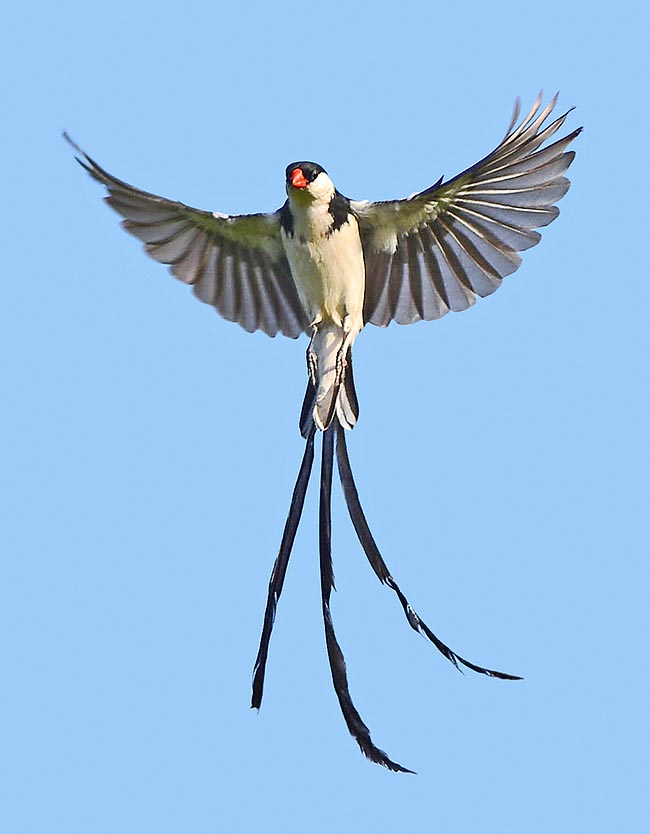 The male has a small territory, with a harem ite defends fiercely from the intruders. Here twirls skillfully, keeping still in the sky in the Holy Spirit position to seduce the female on duty © Gianfranco Colombo

Of course, the tail is normal, so that the length of the female does not exceed the 12-13 cm.

Once the nuptial time, that lasts very few seeks, is ended, the male loses the tail and changes the livery transforming in a normal small bird very similar to its partner and until the following year it will live with this livery.

The chicks, that as we shall see, come to life in another nest are very similar to the parents when in cryptic phase with much reduced tail and yellowish buccal line.

The hatching parasitism adopted by the pin-tailed whydah deeply differs from that done by our well known Common cuckoo (Cuculus canorus) but also from that practiced by its same congeners.

It differs from the cuckoo’s one as its work merely ends in adding one or two eggs into the chosen nest, without usually taking off or destroying any one.

It differs from its congeners as this whydah does not have a specialization in the choice of the subject parasitized.

Whilst the other whydahs parasite only one species, our one has a range of at least 10 different species even if the preferred one is in absolute the Common waxbill (Estrilda astrild).

So were noticed cases of parasitism with the Neddicky (Cisticola fulvicapilla) and the Tawny-flanked prinia (Prinia subflava) two African cisticolids, however purely insectivorous species. 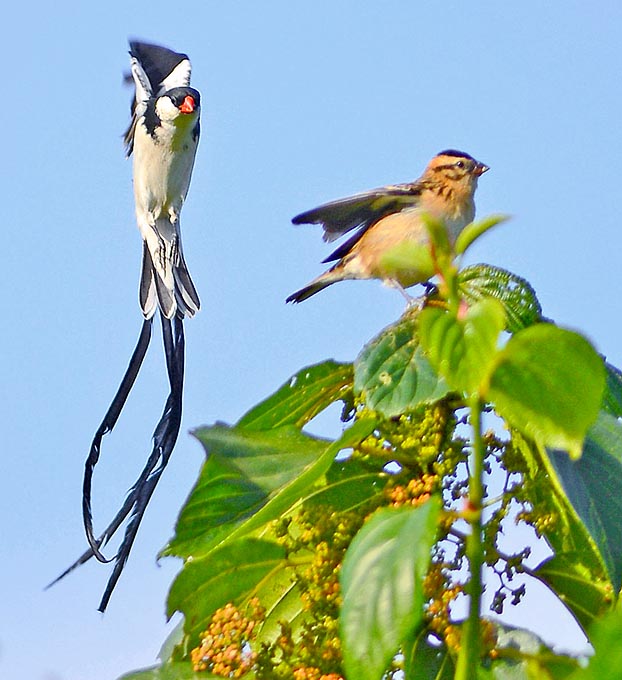 Dancing butterfly. The female, right, is enthusiastic and will lay up to 20 eggs, 1 to 4, in the chosen nests. The parasitized species are a ten, to be carefully selected at the right time because after an 11 days of brood the chicks must come to life together with the brethren. They will stay with them 15-20 days © Gianfranco Colombo

The male of the pin-tailed whydah is polygynous and gathers in its territory a harem of various females it defends fiercely against any intruder.

The female lays 1 to 4 eggs in the chosen nests and then starts again with another nest always inside its territory till when she has completed its typical brood of a ten of eggs. Some observations talking about a total quantity per female that may even exceed the 20 eggs are to be verified.

The spawning must be synchronous with the parasitized species in order avoid inequality of age inside the brooding. The eggs hatch after 11 days and the chicks remain in the nest, together with the half brethren for 15-20 days more.

Also after having done their first flight, they remain for a week with the adoptive parents then, suddenly, with no apparent reason, gradually abandon the host family and join groups of the same species. It does not have particular foes that may compromise its status. Predations of the nest have seen done by the Black-winged kite (Elanus caeruleus) but the attack was surely directed to the parasitized species. Therefore, it is not included in the species considered as endangered.

The pin-tailed whydah is a highly coveted bird in the breedings of exotic birds and often stands among the species bred in the amateur’s world for the market of the pet animals. Also the zoos often exhibit specimens of this species even if not for reproduction purposes. As a matter of fact, the nidification in cage of the pin-tailed whydahs often encounters difficulties due to the high competivity they show towards their own fellows enclosed in the same ambient and also with the same passeriforms it will later on parasitize. Of course, we talk of the only male who adopts in nature a diffused form of polygyny gathering around itself a harem of females from whom its progeny will depend.

Vidua macroura was last modified: May 9th, 2020 by Giuseppe Mazza